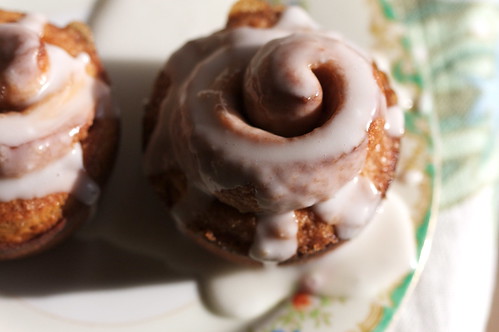 I have a confession to make.  It’s about cinnamon rolls.  I love these gooey little treats to pieces, but I only eat the center. That’s it, just the center coil.  Why?  That’s where all the goodness is!  I see the rest of the cinnamon roll as protection for the precious, beyond delicious center.  I always feel wasteful, but someone always comes along and gladly eat the shamelessly discarded scraps.

Recently McDonalds came out with a dessert that tries to simulate the center cinnamon roll euphoria.  Without openly admitting that I’ve actually enjoyed something from McDonalds, I will say that this dessert (which I think only costs a dollar) is served warm, and full of cinnamon and tenderness… and lots of sweet white frosting type stuff.  I won’t say it’s delicious, but I will say this: warm, cinnamon, sweet, 2:30am, 24 hour drive through, plastic fork, disposable container, no dishes, no evidence.

But if you have the time and inclination, these cinnamon rolls are a dream. 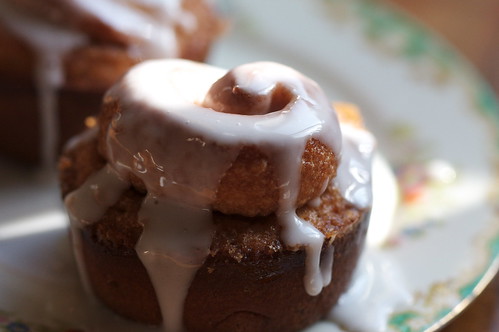 These cinnamon rolls were adapted from a recipe for a Norwegian Coffee Cake.  The yeasted bread has cinnamon, cardamom and freshly grated nutmeg.  The bread, in its original form is a beautiful braided creation, that even rivals the picturesque yumminess of these cinnamon rolls.

1.  Mix the sponge: In a medium bowl combine all of the dry ingredients followed lastly by the milk.  Stir together for 2 minutes, then cover with the flours, then the salt from the final dough.  The flours are used on top of the sponge like a covering of plastic wrap.  Allow to ferment at room temperature for 20 minutes.

2.  Meanwhile combine all of the ingredients for the cinnamon sugar filling and set aside.  Grease and flour a cupcake baking pan and set aside.

3.  Begin the final dough:  While the sponge is fermenting, in a 4-qt mixing bowl fitted with a paddle attachment, cream the butter of medium speed until smooth and pale.  Add the sugar, lemon zest and spices and continue creaming at the same speed for 5 minutes.  It should be light, fluffy and fragrant.  Add the eggs in 4 additions, mix until combine.  The mixture will look very wet, and curdled.  This is a lot of eggs, for the amount of butter, it won’t be completely incorporated.  Don’t worry!

4.  Add the flour covered sponge to the butter mixture.  Mix on low speed until evenly combined.  On medium speed, continue to mix with the paddle attachment for 2 minutes.  Switch to the dough hook and mix on low speed until smooth and satiny.  If the dough is sticking a lot to the sides of the bowl, add all purpose flour 1 Tablespoon at a time.  Stop the mixer occasionally to scrape the dough off the bottom of the bowl.  Mixing with the dough hook takes about 5 minutes.  You can finish with a minute or two of hand kneading if you like.

5.  Place the dough in a lightly greased and floured bowl.  Next, tuck greased plastic wrap around the dough so that no air can enter. Place a clean dish towel over the bowl.  Bulk ferment at room temperature for 1 1/2 hours. 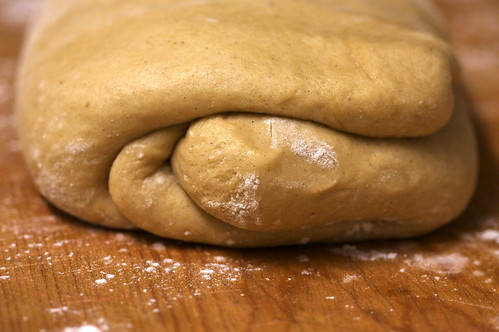 7. On a lightly floured work surface, using a rolling pin, degas and roll the dough out to a rectangle 15 inches high and 12 inches long. 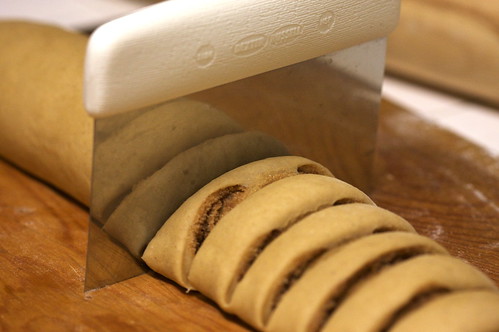 9. Using a bench knife, or sharp kitchen knife, slice the dough into 1 inch cinnamon rolls.  Place cinnamon rolls into the cupcake pan for baking.  At the point, sliced cinnamon rolls can also be placed on a cookie sheet to freeze for later baking.  Either way, cover the sliced cinnamon rolls with plastic wrap and allow to rest and almost double in size, about 50 minutes.  If the room is very warm from the oven, they will proof in as little as 35 minutes.

10.  Bake for 10-15 minutes, keeping an eye on them after 10 minutes, until they are a lovely golden brown.  If you’re freezing some, place the entire cookie sheet in the freezer, after the final rise, until rolls are frozen.  One frozen you can stack them for storage.  I let them mostly thaw before I bake them.

11.  Remove from the oven and cool in pan on rack for about 20 minutes.  Carefully remove form pan, and when completely cool, drizzle with glaze.  These are  best eaten the day that are made!

END_OF_DOCUMENT_TOKEN_TO_BE_REPLACED