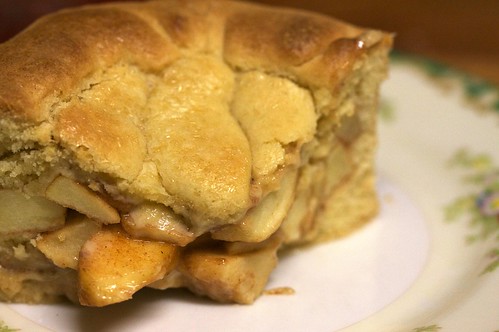 The title to both this post and this dessert is a little hum drum.  Russian Grandmothers’ Apple Pie Cake… it just doesn’t set off fireworks in my head.  And frankly, I always feel a bit off put when apostrophes are in strange places (here I am considering s’ strange).  I was an English major in college, and I still just feel put out with the apostrophe after the s.  I actually have to think about the Pie Cake, and who, and how many Grandmothers it belongs to.  It’s a lot. I know!  Well let’s just clear things up right now and say that this Apple Pie Cake belongs to many Russian Grandmothers.  That’s what the whole s’ was trying to tell us.

I would also like to informally change the name of this recipe to The Apple Pie Cake that belongs to Many Russian Grandmothers.  I don’t think Dorie will mind.

Recipe and more cake talk after the big jump. 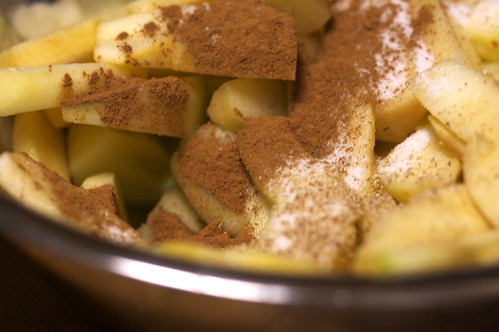 The dough for this Pie Cake is one of my new favorite things. It’s more of a cake than a pie.  To make it, you cream softened butter and sugar like a cake instead of cutting cold butter into flour like traditional pie crust.  The dough also has plenty of baking powder to give it all its rising magic.  The result is tender, buttery with allusions to both cake and pie!

I’m going to trying this Pie Cake dough with all sorts of fillings- fresh apricots will be my next adventure!

For this Tuesdays With Dorie challenge, I decided to make a Mini Pie Cake, and used half of the recipe below to create a 3-inch inch high cake in a 6-inch by 3-inch round cake pan, greased and floured of course!  Thank you to Natalie of Burned Bits for the selection!

from Baking: from my home to yours

10 medium apples, all one kind or a mix (I like to use Fuji, Golden Delicious and Ida Reds; my grandmother probably used dry baking apples like Cordland and Rome)

To Make The Dough: Working with a stand mixer, preferably fitted with a paddle attachment, or with a hand mixer in a large bowl, beat the butter and sugar together on medium speed until smooth, about 2 minutes.  Add the eggs and continue to beat until the mixture is light and fluffy, about 3 minutes more.  Reduce the mixer speed to low, add the baking powder and salt and mix just to combine.  Add the lemon juice – the dough will probably curdle, but don’t worry about it.  Still working on low speed, slowly but steadily add 3 1/4 cups of the flour, mixing to incorporate it and scraping down the bowl as needed.  The dough is meant to be soft, but if you think it looks more like a batter than a dough at this point, add the extra 1/4 cup flour.  (The dough usually needs the extra flour.)  When properly combined, the dough should almost clean the sides of the bowl.

Turn the dough out onto a work surface, gather it into a ball and divide it in half.  Shape each half into a rectangle.  Wrap the dough in plastic wrap and refrigerate for at least 2 hours, or for up to 3 days.  (The dough can be wrapped airtight and frozen for up to 2 months; defrost overnight in the refrigerator.)

To Make The Apples:  Peel and core the apples and cut into slices about 1/4 inch thick; cut the slices in half crosswise if you want.  Toss the slices in a bowl with a little lemon juice – even with the juice, the apples may turn brown, but that’s fine – and add the raisins.  Mix the sugar and cinnamon together, sprinkle over the apples and stir to coat evenly.  Taste an apple and add more sugar, cinnamon, and/or lemon juice if you like. 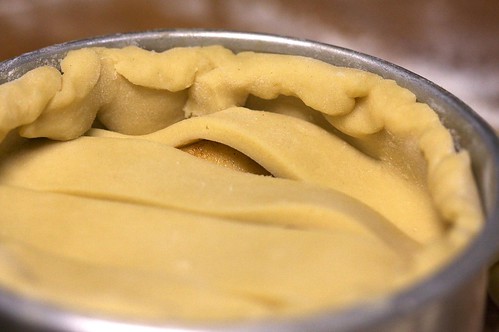 Getting Ready to Bake: Center a rack in the oven and preheat the oven to 375 degrees F.  Generously butter a 9×12-inch baking pan (Pyrex is good) and place it on a baking shee tlined with parchment or a silicone mat.

Remove the dough from the fridge.  If it is too hard to roll and it cracks, either let it sit at room temperature for about 15 minutes or give it a few bashes with your rolling pin to get it moving.  Once it’s a little more malleable, you’ve got a few choices.  You can roll it on a well-floured work surface or roll it between sheets of plastic wrap or wax paper.  You can even press or roll out pieces of the dough and patch them together in the pan – because of the baking powder in the dough, it will puff and self-heal under the oven’s heat.  Roll the dough out until it is just a little larger all around than your pan and about 1/4 inch thick – you don’t want the dough to be too thin, because you really want to taste it.  Transfer the dough to the pan.  If the dough comes up the sides of the pan, that’s fine; if it doesn’t that’s fine too.

Give the apples another toss in the bowl, then turn them into the pan and, using your hands, spread them evenely across the bottom.

Brush the top of the dough lightly with water and sprinkle sugar over the dough.  Using a small sharp knife, cut 6 to 8 evenly spaced slits in the dough.

Bake for 65 to 80 minutes, or until the dough is a nice golden brown and the juices from the apples are bubbling up through the slits.  Transfer the baking pan to a cooling rack and cool to just warm or to room temperature.  You’ll be tempted to taste it sooner, but I think the dough needs a little time to rest. 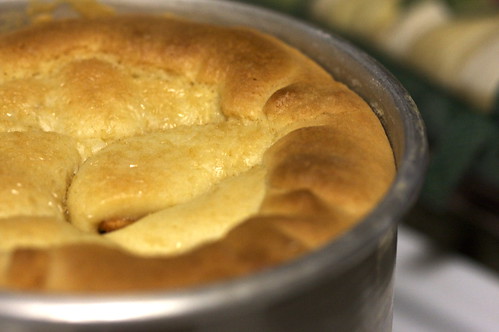