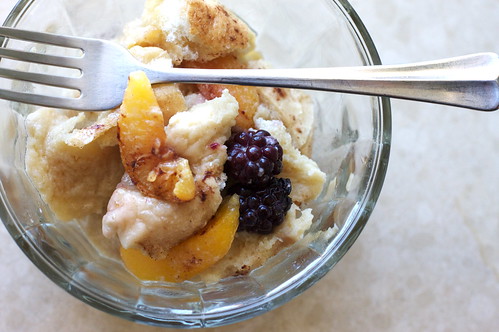 Bread pudding exists in the sweet space between breakfast and dessert.  With all of the milk in the recipe, bread pudding feels like eating the most ridiculously rich breakfast cereal.  I suppose for most people, it’s a bonafide dessert.  Perhaps I’m just trying to find as many ways as possible to eat dessert for breakfast.

I’ll admit, I only recently warmed up to bread pudding.  My Dad absolutely loves the stuff, so I was inspired to create my own.  I think I had this conception that bread pudding was simply soggy bread mixed with cinnamon, milk and raisins.  Not so!  This dish can be made with as many combinations as you can dream up.  With this recipe, I wrestled my preconceived notions of bread pudding to the ground.  I decided to combine bread pudding and cobbler.  I know… pretty awesome!   Now we’re getting into the realm of respectable breakfasts… or desserts. 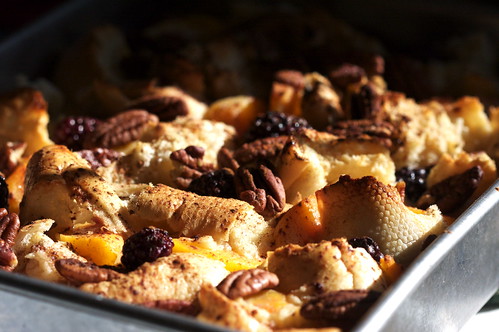 Blackberry Peach Bread Pudding combines the delicious fruit I love in cobblers, with loads of the bready goodness that I crave everyday of my life.  Throw in some Grand Marnier and toasted pecans, and it’s pure heaven!

This is a great dessert because you can very easily throw it together in a pan, wrap it up and let it sit in the fridge over night to soak.  The next morning, pop the whole tray in the oven, and delicious cobbler bread pudding is ready to eat (after proper cooling time) in about two hours.

1 cup half and half 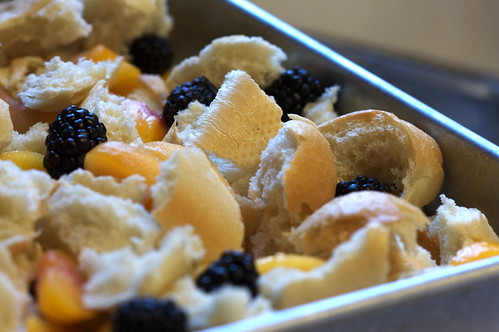 Begin by tearing the stale french bread into bite sized pieces.  This can be done by hand, because pieces do not have to look perfect, just need to be roughly the same size.  Place all of the bread pieces into a 9×13-inch baking pan and top with peaches and berries.  Using your hands, toss the fruit into the bread pieces so they are evenly distributed through the pan.  Set aside.

In a medium saucepan, heat butter and 3 cups milk.  Heat just until butter melts, but milk should not boil.

While milk and butter are heating, whisk together eggs, half and half, sugar, vanilla extract and Grand Marnier.  Slowly whisk the warmed milk and butter mixture into the eggs and half and half mixture.  Pour the entire mixture on top of the bread pieces and fruit.  Cover with plastic wrap and refrigerate overnight.

When ready to bake, preheat the oven to 350 degrees F.  Remove the plastic wrap from the bread pudding, sprinkle with cinnamon  and place in the oven for 45-55 minutes.  The bread pudding will still wiggle when shaken, but will set during the cooling process.   Let set for at least 30 minutes, once removed from the oven.  Serve warm or at room temperature.

I love this served warm with vanilla ice cream! 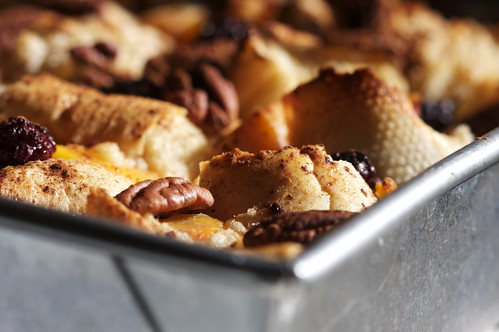