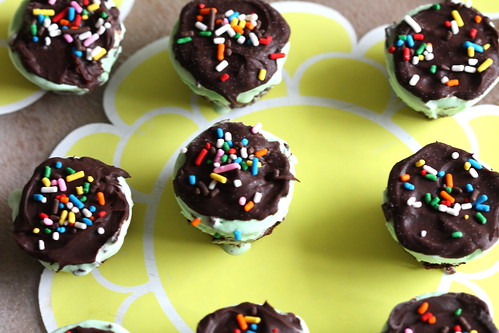 I absolutely LOVE Memorial Day weekend. It’s like all the good things in the world come together in one weekend. I look forward to this three day weekend at the start of May. Not only is it my birthday weekend, but it’s also the unofficial start of summer, the start of outdoor grilling and parties with friends, and just all around good times.

If I had a lake anywhere near me, I’d be down at the lake all the time, just so I could say, “I’m going down to the lake!” That feels like an ultra summer thing to say. Lake or no lake, I feel a beautiful summer coming on.

And as if I couldn’t get more excited, I’ve discovered I can make ice cream cupcakes! These little gems are really easy to throw together and you can make them with any flavor combination you can imagine. The only slight downside is that they melt (as ice cream tends to do) when they’re not in the freezer. Melting won’t be too much of an issue because these don’t tend to stick around long. I’ve already eaten 5, and the party isn’t until Sunday. 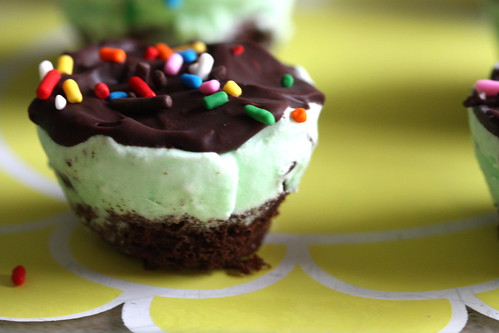 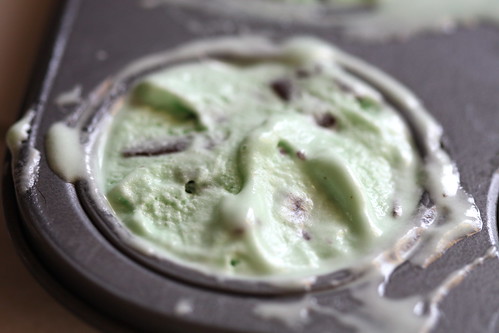 How to Assemble Ice Cream Cupcakes

Start with cupcakes. I made mine mini cupcakes in a tiny muffin pan, making 2 bite ice cream cupcakes. You can use a regular sized cupcake pan if you like! You’ll just have bigger treats.

Remove the cupcakes from the oven, let cool in their tins for 15 minutes. Loosen the cupcakes by running a knife along the edges of the muffin cups. Make sure that none of the cupcakes stick to the pan, but keep the cupcakes in the cupcake pan, cover with plastic wrap and put in the freezer for 3 hours, or overnight is best. 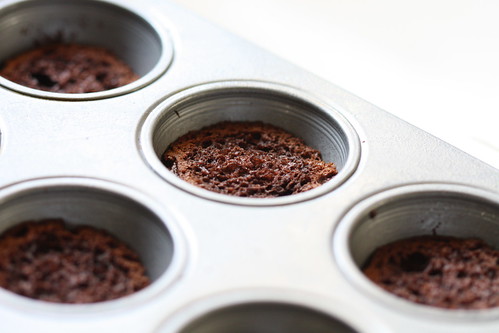 Remove the cupcakes from the freezer when you’re ready to use them. If some of the cupcakes have domed up while cooking, remove them from their cup and use a small serrated knife to even out the top of the cupcake. Ideally, you’d like to have 1/2-inch little cupcake bottoms.

Remove the ice cream from the freezer to let soften before filling cupcake tins. Leave on the counter for 10minutes or defrost in the microwave. When ice cream is softened, use a quick hand to spoon and flatten ice cream on top of the cake. It’s a little messy, but don’t worry about that. When all of the cakes are topped with ice cream, return to the freezer to harden. I left my ice cream cupcakes in the freezer over night, but give them at least 4 hours.

Be creative and top your cupcakes with anything you like. Whipped cream, chocolate ganache or caramel would be lovely. 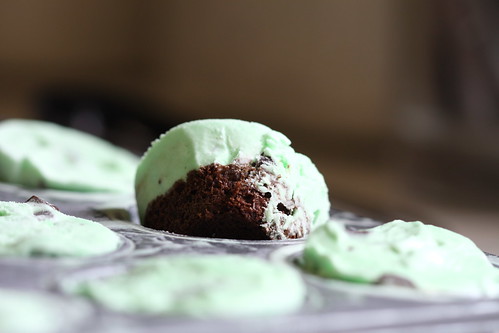 To remove the ice cream cupcakes from their tins, warm a small sharp knife under hot running water. Run the warm knife along the edges of the ice cream cupcake until it’s easily lifted out of it’s tin. This isn’t too hard a process, mine practically jumped out. Place the cupcakes on a plate and return to the freezer for 15 minutes. 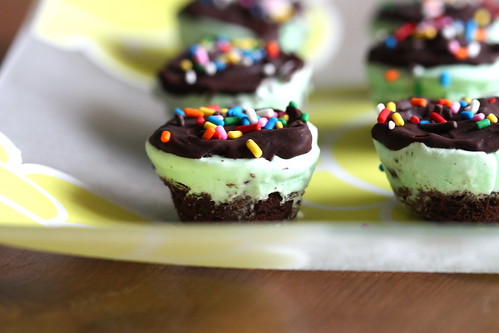 Update: If you’d like to make ice cream cupcakes in cupcake liners, I wrote another tutorial.  Here it is!

This weekend I read an essay about the vulnerabili

@drakeoncake, with steak. She back.

I’ve made Single Lady Pancakes for the last elev

Scrolled back to 2014 in my camera roll in the mid