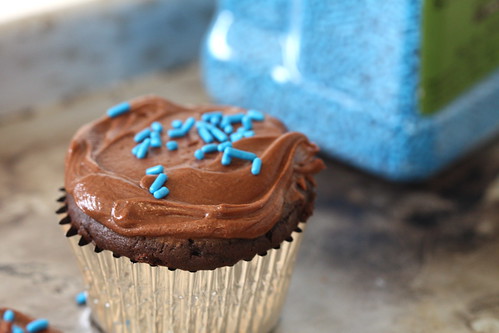 Please allow me this last party post. You won’t have to hear a word about it after this. Promise. But what’s a party without cupcakes? And what’s a chocolate cupcake without The Best Chocolate Buttercream Frosting? Tragedy, I suppose.

It should go without saying that these super soft chocolate cupcakes were a hit at the party. But there is one mystery. Around about 2 in the morning, as I was somehow making my way around the room collecting dirty plates, I ran across a plate with a discarded cupcake on it. The cupcake had one bite taken out of it, and then the remainder of the cupcake was smashed upside down onto the dirty paper plate. WHAT!? Who would do that!? Seriously… not cool. 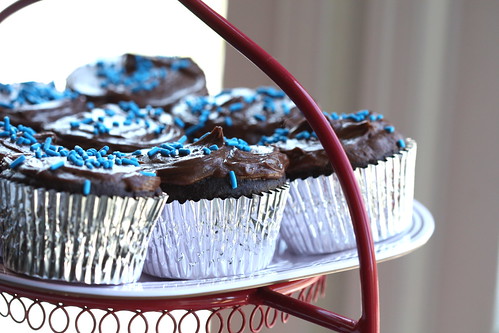 Using a stand mixer fit with the paddle attachment, cream the butter and sugar until pale and fluffy, about 3 to 5 minutes. Add eggs, one at a time, beating for 1 minute in between each addition. Scrape down bowl after each addition. Beat in vanilla.

Sift together the flour, cocoa, baking soda, and salt. Add the dry mixture to the creamed butter and sugar alternately with the sour cream. Begin and end with the flour mixture. Beat to incorporate.

With the mixer on low speed, slowly add the cooled strong coffee to the batter. Add in a slow steady stream to prevent splashing. The batter will become fairly thing and smooth. Scrape down bowl and beat for 1 minute to ensure the batter is completely mixed.

Pour into cupcake papers and bake on middle rack for 15 minutes, or until a pick inserted into the center of the cakes comes out clean.

Remove from oven and set on wire rack to cool for 10 minutes. Remove cupcakes from pan and let cool to room temperature on wire racks. 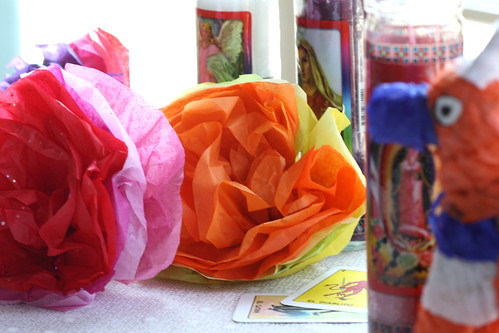 Now, as promised- The best Chocolate Buttercream Frosting, with a secret ingredient- Ovaltine. Yes, rich chocolate Ovaltine. When combined with heavy cream, it gives the frosting the most luscious flavor and spreadable consistency. So yum!

I didn’t invent Chocolate Buttercream.  The inspiration comes from a Los Angeles bakery I worked in.

Cream together butter, cocoa powder and salt. Butter mixture will be very thick. Turn off the mixer, scrape down the sides of the bowl and add powdered sugar. Turn mixer on low and mix in powdered sugar while adding milk and vanilla extract. As the sugar incorporates, raise the speed of the mixer to beat the frosting. Beat until smooth. In a 2 cup measuring glass, stir together heavy cream and Ovaltine. Turn mixer speed to medium and pour cream mixture into frosting in a slow, steady stream, until you’ve reached your desired consistency.  You may not need the full amount of Ovaltine and cream. 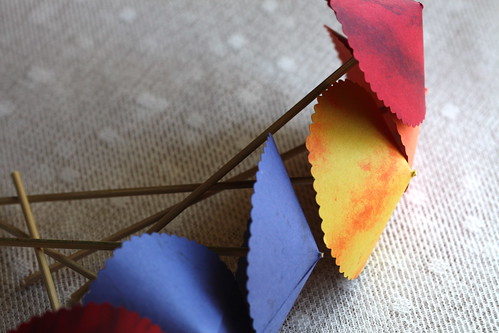 Remember how I was lamenting about my sometimes insane Martha Stewart tendencies? Well the craft gene, handed down to me from my mother, came out in full force with these drink umbrellas. The instructions are from Martha Stewart- which pretty much makes her the instigator. Should I shake my fist in the air with displeasure? No, I have to admit, these umbrellas might have been worth the 5 hours it took to make them. They’re pretty cute. 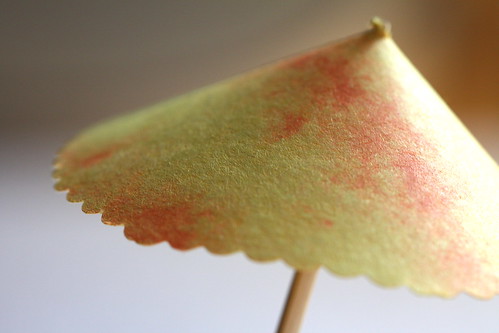 And yes, there were people at this party. But I can’t be sure they all want to be immortalized on this blog. I’ll spare them that pain, if you’ll allow it.