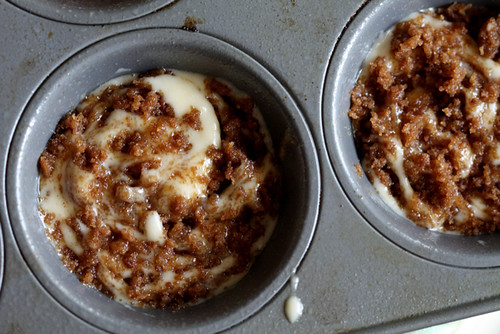 Just the thought of cinnamon rolls-  warm, gooey, soft, sweet- makes me literally swoon.  I love them.  If I were a baking superhero (I’m working on it) my weakness would be cinnamon rolls.

As much as I love the little devils (and I hate to say this) I hate to bake them.  The problem is not the sweet yeast dough or the rolling or the slicing.  I simply have no patience for the waiting that is required of me during the proofing, rolling, slicing and proofing again process.  I realize this is totally unreasonable, but it’s just the truth.

I’d like to introduce you to Cinnamon Roll Muffins-  add the yeast, subtract the long rising. 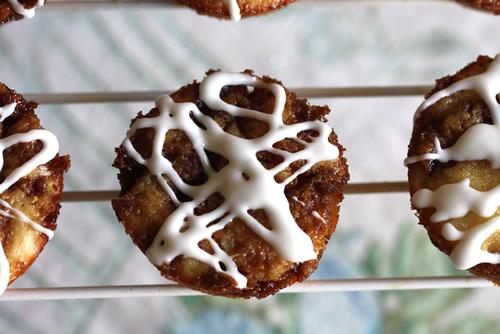 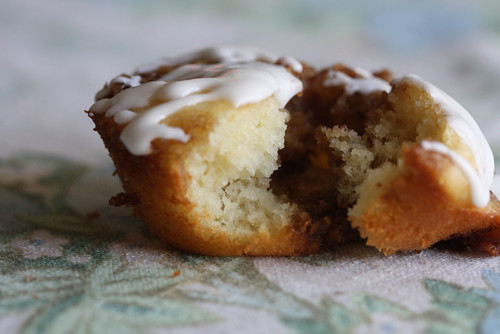 Imagine my glee when I had cinnamon roll-esque goodness coming out of my oven in well under an hour.  These muffins rise for a short 15 minutes in the bowl and then are placed into a cold oven to cook as the oven preheats to 350 degrees.  After 20 minutes in the oven, they’re risen and golden and bubbling with cinnamon and brown sugar. 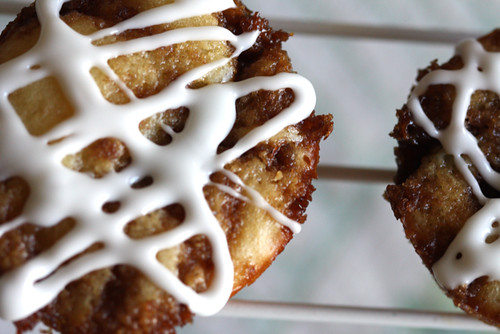 In a large bowl, combine flour, sugar and salt. Dissolve the yeast in a measuring cup filled with the warmed milk, then stir milk mixture, vegetable oil, vanilla extract and egg into the flour mixture. Mix well, until very smooth. Pour into prepared pan and let rest for 15 minutes.
While the dough rests, mix together butter, brown sugar, cinnamon and cardamom in a small bowl using a fork until all the butter has been incorporated into the sugar and mixture is crumbly.  Divide the batter between 12 greased muffin cups. Sprinkle evenly on top of rested dough and press the mixture down into the dough with your fingertips (or swirl in with a spatula.)
Place pan into a cold oven, then set the oven temperature to 350F.
Bake for about 20 minutes, until bread is lightly browned at the edges and the center of the bread springs back when lightly pressed. Some of the sugar mixture on top may still be bubbling.
Cool for at least 30 minutes before whisking the powdered sugar and milk together to form an icing and drizzling it onto the bread.
Serve warm. Leftovers can be reheated in the microwave.