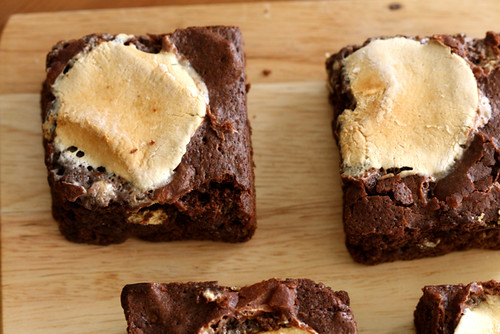 Everyone has their own way of enjoying toasted marshmallows.  It’s very much a personal thing… this I understand.

I like my roasted, toasted marshmallows extra crispy… extra well done.  I want that sucker on  the end of the misshapen close hanger, stuck right into the depths of the fire.  I want it to come out flaming.  That’s right, I’m a marshmallow torch girl.

Apparently, the marshmallow torch is not how you make friends at all-girl sleep away camp.  I would always get groans of disapproval from the girls that were trying to keep their precious marshmallows just far enough away from the orange coals to perfectly toast them.  Maybe they were less than thrilled with my marshmallow torch because I usually managed to set at least one of their darling marshmallows on fire just out of sheer proximity.  I considered it a favor.  Them..?  Not so much.

But these brownies aren’t really about my summer camp misadventures, are they?  These S’mores Brownies are more about fudgy, dense chocolate that bakes up with graham cracker bits and toasted marshmallows.  Toasted, not torched. 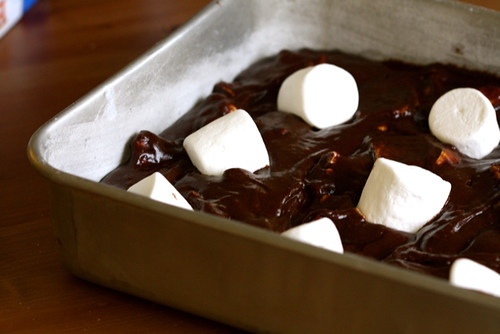 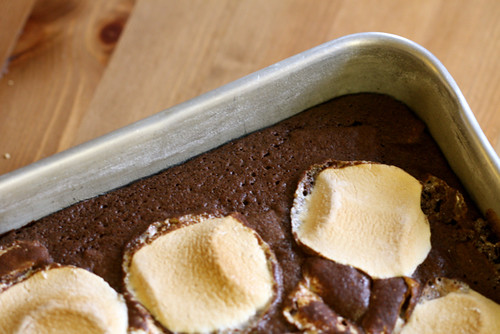 There are few things quite as spectacular as a pan of warm brownies just about 15 minutes out of the oven.  With their  slightly crackled top and perfectly chewy  chocolate center, brownies are a simple pleasure.  These S’mores Brownies are  simply an improvement on something that didn’t really need much fussing with.  The result is a marshmallow topped brownie that’s so good, you might find ways to rationalize a big hunk for breakfast.  Chocolate can be breakfast too.  Life is entirely too short not to make a S’mores Brownie breakfast from time to time. 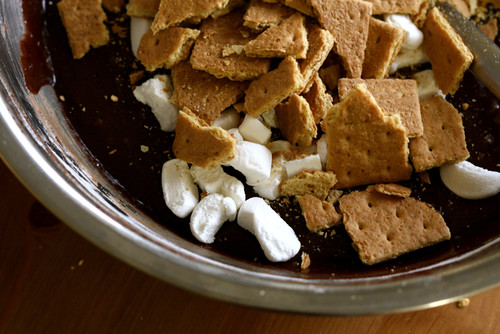 Preheat oven to 350°F. Butter 9×13-inch baking pan with 2-inch-high sides. Combine first 3 ingredients in small bowl. Stir butter and chocolate in a medium sized bowl over a  heavy  saucepan of simmering water.  Stir chocolate and butter in this double boiler until melted and smooth.

Marshmallows will be browned and puffy but will deflate as the brownies cool.  Cool for at least 20 minutes than slice with a sharp knife, cleaning the knife with hot water if it gets too messy and sticky.  Serve or wrap individually in wax paper for storing. 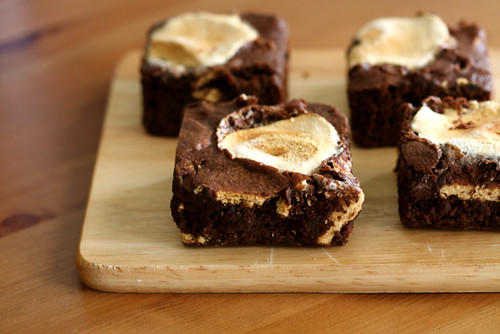 Today marks an important holiday for the Wilson family!  It’s Aunt Dede’s birthday!  Aunt Dede was my dad’s sister, the baker of every family birthday cake for as long as she lived, and the patron saint of The Bakehouse.  Today we’re celebrating Dede’s birthday and celebrating the ever present smile on her face with Dede’s…

END_OF_DOCUMENT_TOKEN_TO_BE_REPLACED

Just peeking my head in here. I know we’re in the absolute dog days of August. We’re at the beach (God willing). We’re eating ice cream with the freezer open. We are most certainly not wearing pants. We are walking on the shady side of the street when we venture out. We are prone and…