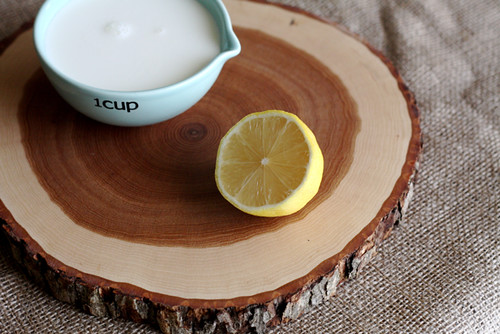 Let’s take a quick minute to talk about buttermilk.

Say you wanted to make some butter and buttermilk waaaaay back in the day.  First you’d take your fresh milk from the cow, let’s say a big old bucket full… and you’d leave it out at room temperature for a few days.  After a few days the rich cream would separated and formed a thick layer on top of the milk.  During these few days, the milk would fermented a bit from the lactic acid forming bacterias in the milk.  Gross?  Not at all!  The bacteria produced would help lower the pH of the milk and protect with milk from icky microorganisms, making the butter easier to churn.  Once the butter is churned the residual liquid that’s produced…. that’s buttermilk!

Nowadays, buttermilk is a whole other production.  Cultured buttermilk, as it is called in the United States these days, is a pasteurized milk product.  Instead of letting the milk ferment naturally, most dairies now add a culture of lactic acid bacteria to produce the same thickening and curdling of the milk.  Many dairies also add tiny yellow colored flecks of butter to simulate the old fashioned product.

Buttermilk is an important part of baking.  The acidic milk combined with baking soda in a recipe is a baker’s dream.  See… when baking soda is combined with the lactic acids of buttermilk, the soda releases carbon dioxide that when heated, released tiny bubbles that expand and lift and lighten whatever you’re baking.

But what if you’re plum out of buttermilk?  There are solutions…. let’s talk. 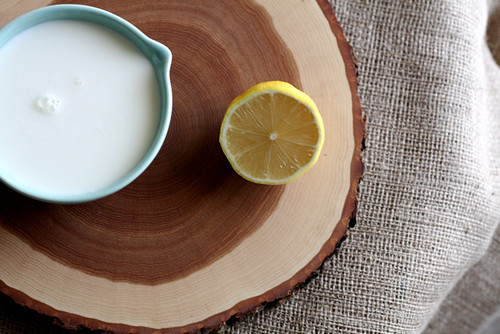 In a pinch and you’ve run out of buttermilk?

In a 1-cup measuring cup, add 1 Tablespoon of fresh lemon juice.  Top the lemon juice with with skim, low fat or whole milk.  Stir and let sit for two minutes.  After two minutes, your milk is both acidic and curdled.  Perfect!

Mix 3/4 cup plain yogurt with 1/4 cup of milk.  Stir and make it a quick substitution for buttermilk.

Milk and Cream of Tartar For the past few, oh I dunno…. decades the only real question for family gatherings is: who is going to make the Texas Sheet Cake? It’s goes without saying that this unassuming, pecan studded cake will be sliced up at the end of every family celebration. As sure as the sun will rise, ya know?…

END_OF_DOCUMENT_TOKEN_TO_BE_REPLACED I haven’t had to pull out all the stops, and all of my party tricks to host brunch and dinner guests this year. In some ways it’s been a luxury to let the dishes pile and air dry on the kitchen counter and I’ve been a little lazy about keeping champagne cold in the fridge…