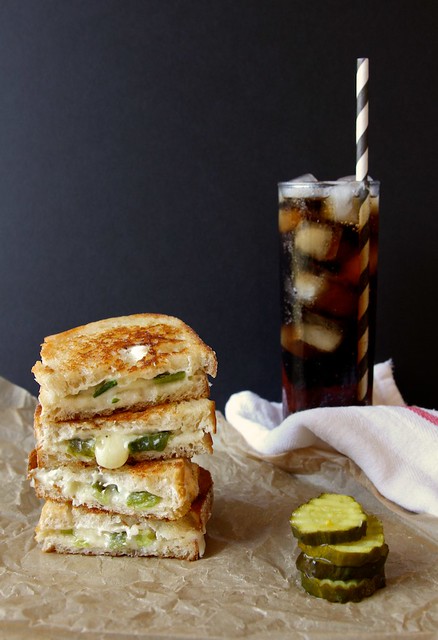 I can’t figure out dry-cleaning.  I think it has something to do with folding clothes perfectly then covering them in plastic.

I can’t figure out why people enjoy karaoke so much when it’s so clearly just the singing version of public speaking… which makes is SO MUCH WORSE YOU GUYS!

I can’t figure out why saying ‘yes’ is easier than saying ‘no’.  Actually I have figured that out.  The face of disappointment is terrifying.

I can’t figure out why Taylor Swifts “We Are Never Ever Getting Back Together” is sooooo dang singable.  Help me.

There are a lot of things I CAN figure out… namely:  Shrimp and Grits and Potato Chip Sandwiches.

And while I still may stumble on the grammatical difference between laying and lying… I know that at least… at the very least, I can make an AMAZING (seriously…) spicy grilled cheese sandwich.  The rest I can Google.  Amen. 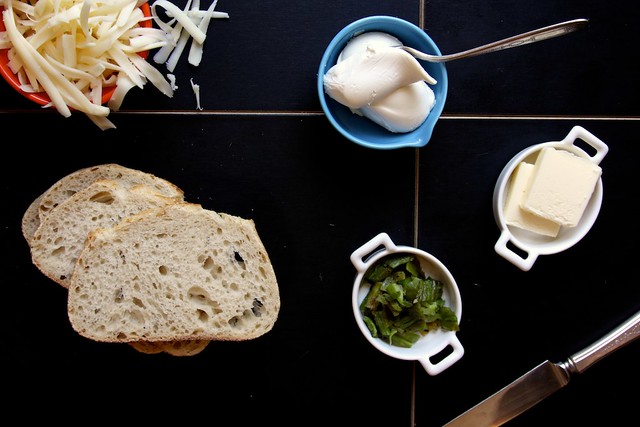 I feel like I don’t need to tell you how to make a grilled cheese sandwich.  You know what’s up.

You may not know that the addition of cream cheese and roasted jalapeno elevate this sandwich to heavenly levels. 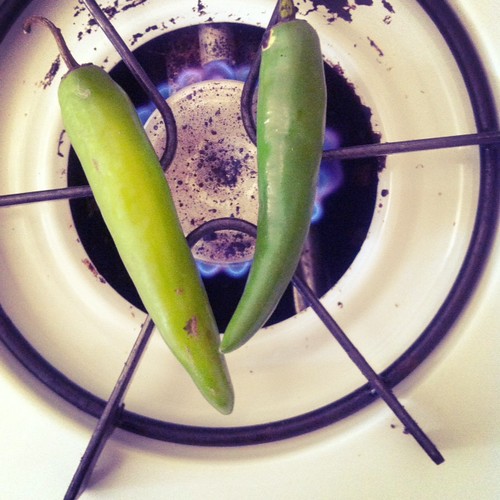 Let’s talk about these dang jalapenos.  We can’t just buy them from the store and go slicing them willy-nilly.

They need to be charred and have their skins removed.  I do this over my gas burner. 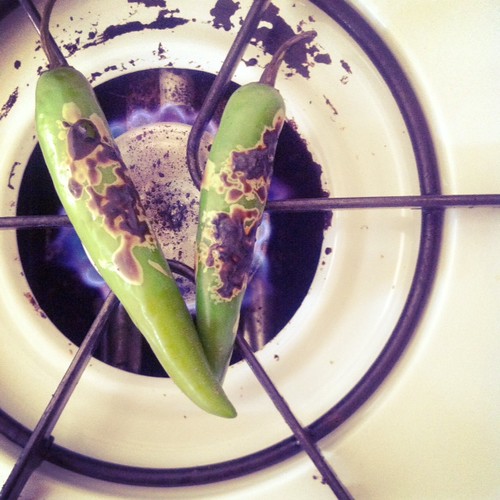 The pepper is blistered and charred over an open flame.  The broiler also works well for this treatment. 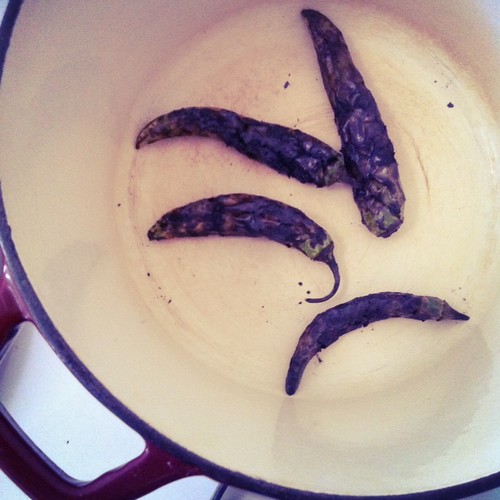 After the peppers are charred, they need to be steamed.  I steamed my peppers in a small saucepan with a tight-fitting lid.  Just place the hot peppers in a regular old pot.  No flame under the pot necessary.  This will help loosen the skins.  It’s pepper skin science. 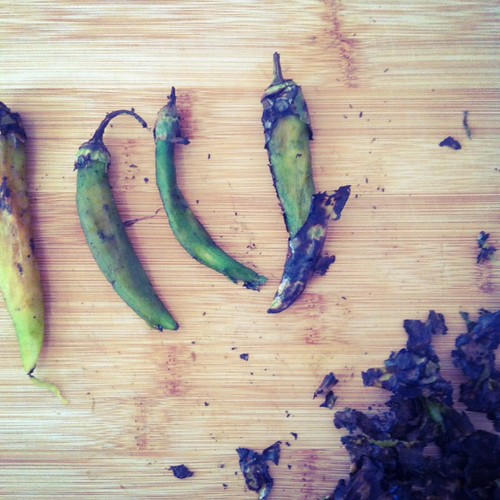 Peppers are peeled.  I used the business-end of a knife to remove the skins . The less pepper spice we get on our hands the better.  It stings. 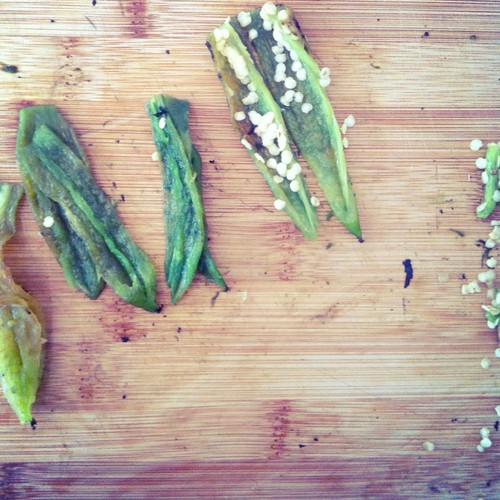 Peeled peppers are sliced open and seeds are removed (again with a knife).  Much of the unbearable heat of jalapeno peppers is in the seed. 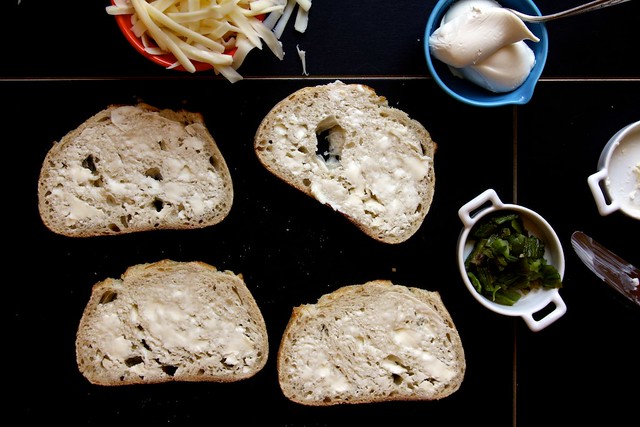 After a coarse chopping of the charred, peeled, and de-seeded peppers… we can get down to sandwich glory. 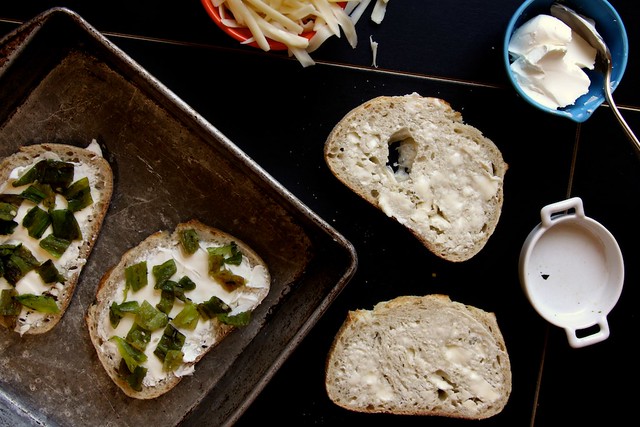 Let’s use two different kinds of cheese for these sandwiches:  cream cheese and Monterey Jack.  Let’s take inspiration from Jalapeno Poppers and just go for it! 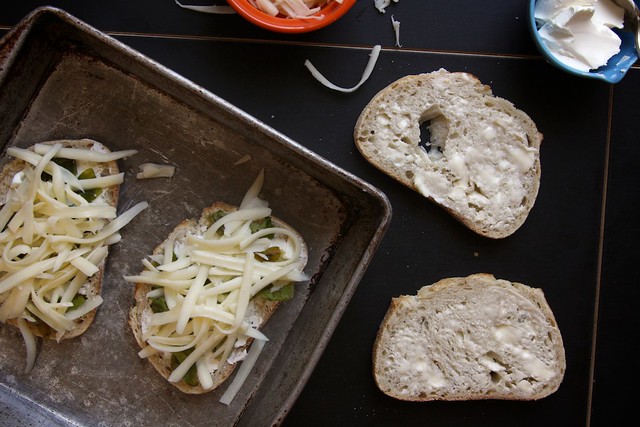 Sandwiches are slathered in butter, smeared with softened cream cheese, topped with roasted peppers, and then sprinkled with Monterey Jack cheese.

I really feel like I need to apologize.  It’s just too good.  Gosh. 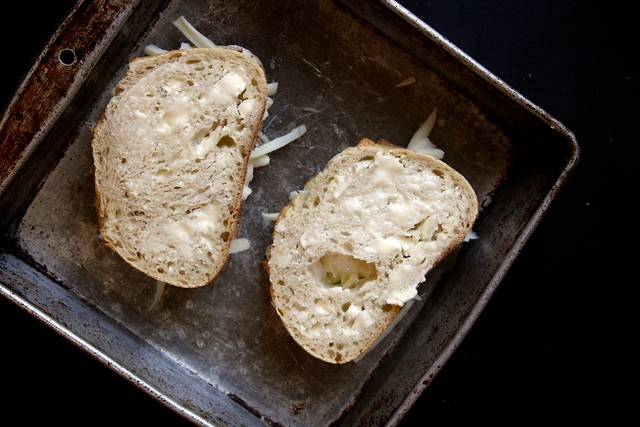 Sandwiches are ready for a hot pan.  I prepared these sandwiches in a square oven pan just so that I could transfer them to a hot skillet.  Let’s melt these! 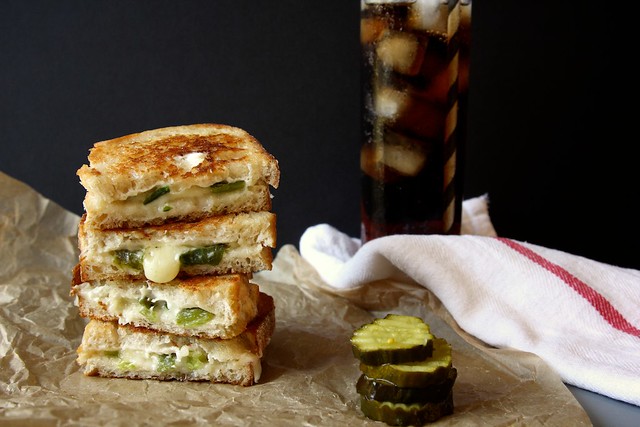 Creamy.  Melty.  Spicy.  Beyond everything you thought you knew about grilled cheese sandwiches.

I paired these with Bread and Butter Pickles and a Cola. 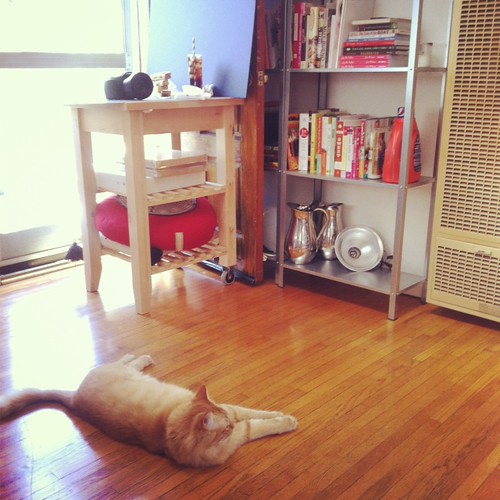 I take my food pictures in a super glamorous location… right by my front door.

This is real life.  Laundry detergent on the bookshelf. 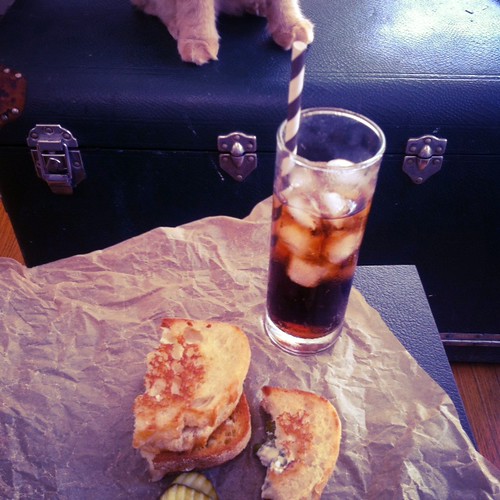 This is also real life.  Medium warm though pleasantly spicy grilled cheese sandwiches.  On the couch.  With a soda and pickles.  And a cat that’s watching, waiting, and begging.

Let’s first work with the jalapenos.  Char jalapeno skins by placing them over a low open flame, and rotating them until blackened all around.  You can also place jalapenos under the broiler and toast until blackened on all sides.  Remove from the flame (or oven), and allow the peppers to steam.  I placed my hot and blackened peppers in a small pot with the lid on.  You can also loosely wrap the peppers in foil.    After peppers have steamed for about 10 minutes, place on a clean work surface.  Use the sharp edge of a knife to scrape the skin off the peppers.  Once clean of skin, slice off the top, cup dow the center vertically, and use the knife to scrape out the seeds.  Coarsely chop and set aside.

I use a knife to peel and de-seed the jalapenos.  It’s best to touch the peppers as little as possible, or wear plastic gloves.

Grill sandwiches in a non-stick saute pan over medium heat.  Flip and cook until golden brown on each side.  Slice in half and serve immediately.

END_OF_DOCUMENT_TOKEN_TO_BE_REPLACED

Each week this fall we’ll revisit a recipe from last year’s Joy the Baker Magazine with new tips, tricks and insights.  The latest issue of my holiday magazine will hit grocery store shelves nationwide (and in Canada!) November 1st!  This week, let’s make Chicken and Andouille Gumbo.   So many hours and so much pure love goes…

END_OF_DOCUMENT_TOKEN_TO_BE_REPLACED

Let that thermometer drop a few three degrees and you’ll find me inside (with the air conditioning still on) in a sweater, with a cozy sandwich to match. Yes that is correct. The calendar reads fall and the forecast calls for Lasagna Grilled Cheese Sandwiches. It’s not often (read: never) that I make myself an…