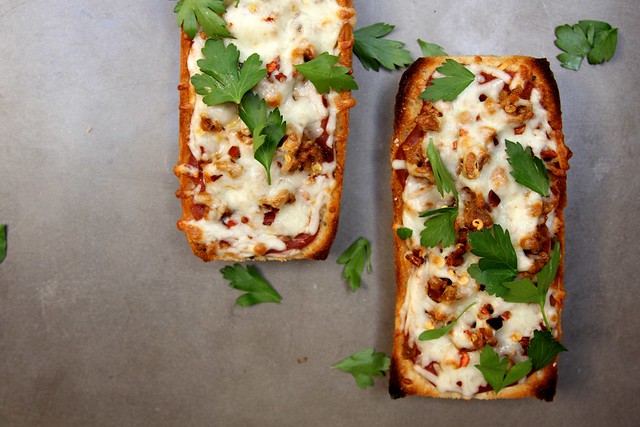 Two things you should know before this whole pizza extravaganza begins.  One: a ‘maj’, short for major… is a best friend.  Two:  Tracy is my maj.

I met Tracy a few years ago.  We caught one other rolling our eyes at the same thing.  It was frozen risotto that deserved our collective eye roll.  To be fair… it was gross and we were hungry.  Tracy is the kind of friend that you can bring to a party because she’ll compliment all the girls (most sincerely), give all the guys a much needed ribbing (most sincerely), and laugh at fart jokes.  She’s a crowd pleaser, and if you tend to be on the quiet side, like me… Tracy is a ringer.  She’s such a win. 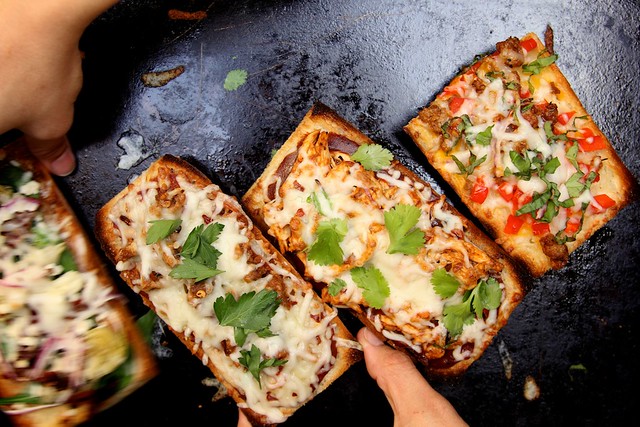 Also… if you were to say a sentence to Tracy like, ‘Hey what should I make for my blog?’, she’ll have the right answer… which is French Bread Pizza, always and forever.

Tracy and I live many miles apart, but found ourselves in the same kitchen this week.  This sort of rare occasion calls for carbs and cheese.  There was sausage and cheese, chicken and barbecue sauce, and a tremendous amount of laughter. 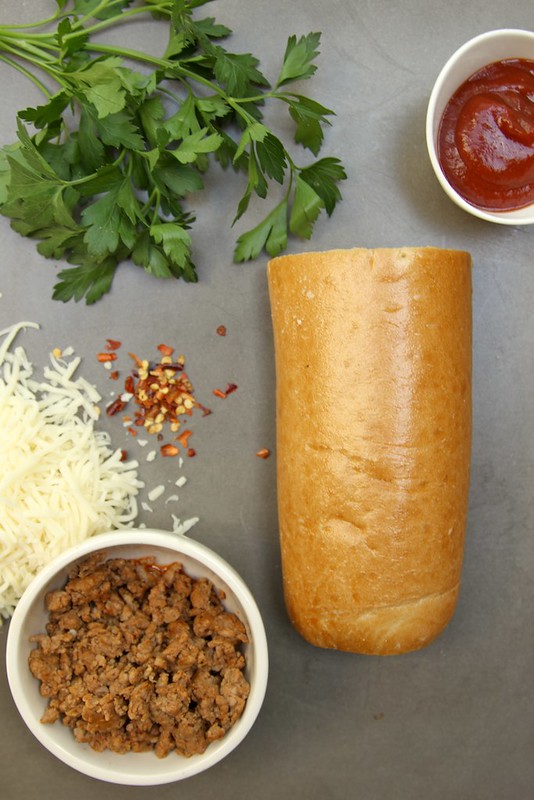 Let’s start with sausage and cheese.

There’s a back story behind this very simple combination of meat, dairy, and carbohydrates. 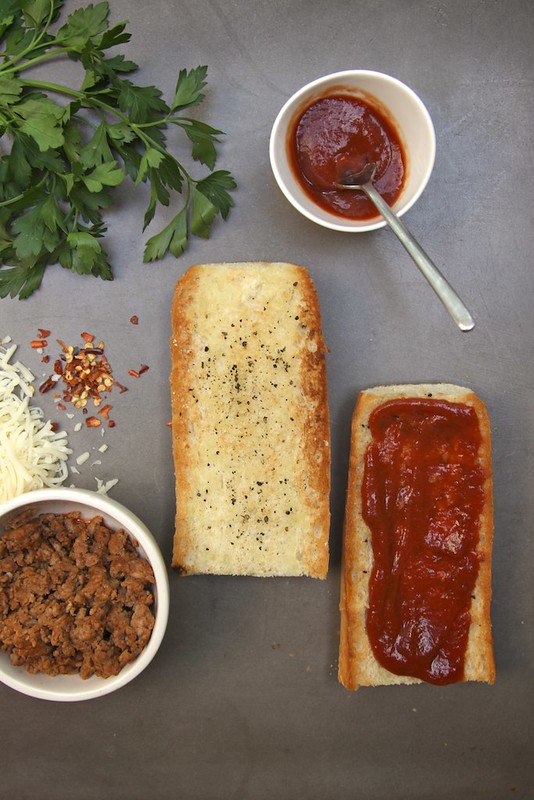 In grade school, I was allowed to buy one school lunch a week.  My choice was always a grease-bomb of a French Bread Sausage Pizza and I was convinced it was the best that had ever happened to me.

Don’t even get me started on chalupa and chocolate milk day… amazing(ly horrible). 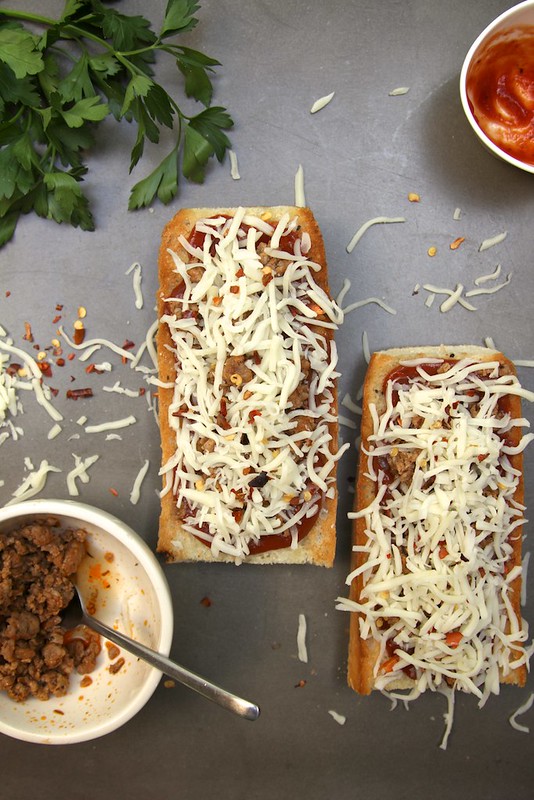 I respect the simplicity of these pizzas.  The sausage is spicy.  The sauce is generous, as is the cheese.

These speak directly to my 9-year old heart.  I just had no way of knowing that I’d go from eating this pizza at a kid-crowded cafeteria table to standing over the kitchen sink devouring a too hot slice.

Slice individual French bread loaf in half and place on a baking sheet.  Drizzle with olive oil and sprinkle with salt and pepper.  Toast under a broiler until edges are golden brown.  Remove from the oven and top with pizza sauce, cooked sausage, cheese and red pepper flakes.  Return to the broiler and heat until cheese is melted and bubbling.  Remove from the oven.  Sprinkle with fresh parsley and serve immediately. 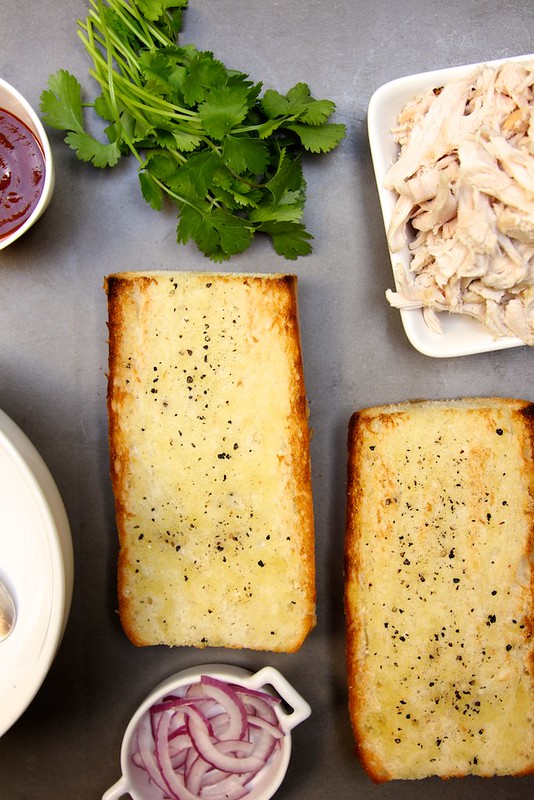 The second French Bread Pizza is inspired by my current adult cravings.

I love the combination of sweet, salty and spicy.  Basically, I want my food to taste like everything it can.  That sounds a bit bratty… maybe I never grew out of that. 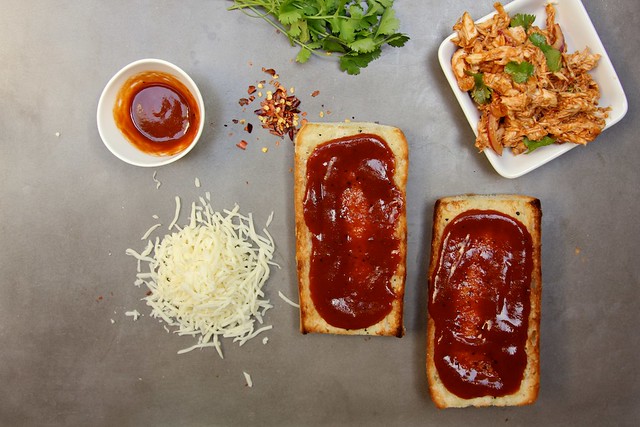 This pizza combined barbecue sauce with shredded chicken, red onions, and just enough (which is a good amount) of cilantro.  Kick the regular pizza sauce to the curb, but welcome the melting cheese with open arm. 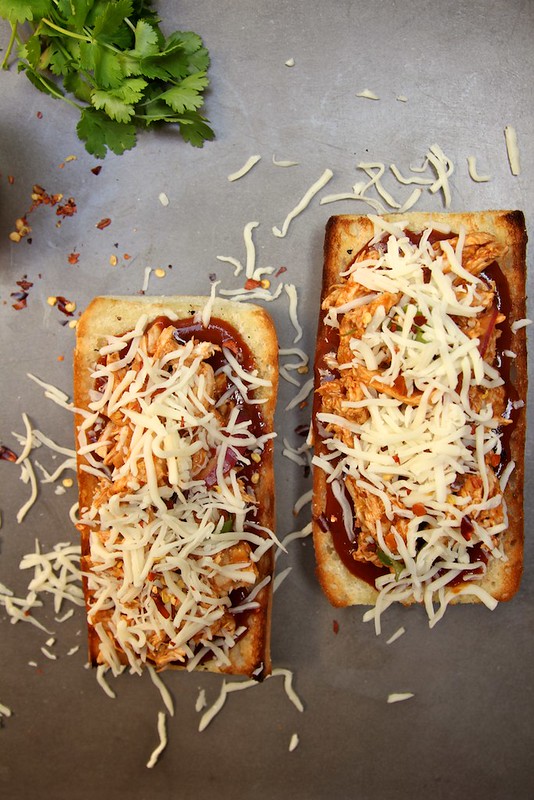 The sweet and spicy notes are out of control in these pieces. 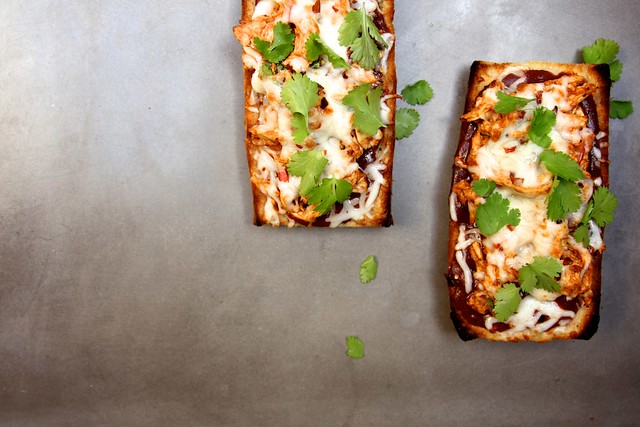 I clicked the shutter three times, then I started eating.  Enough is enough, ya know? 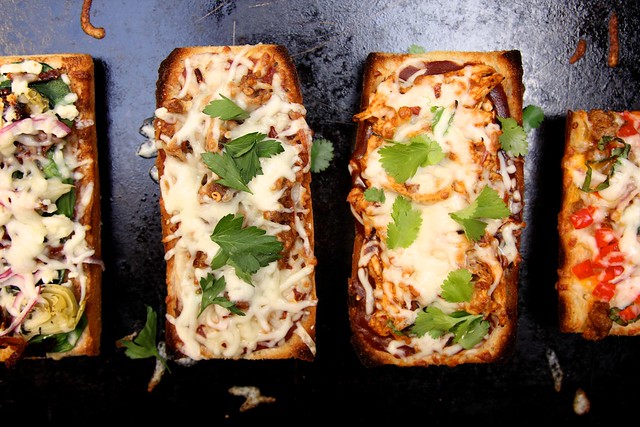 My 9-year old self is so pleased that my (older than) 29-year old self still respects the art of the French Bread Pizza.  This feeling is only amplified by having a maj that can get down with a simple cheesy and bready situation with no shame.  There’s power in that.

Slice individual French bread loaf in half and place on a baking sheet.  Drizzle with olive oil and sprinkle with salt and pepper.  Toast under a broiler until edges are golden brown.  Set aside.  In a small bowl, combine 1/4 cup BBQ sauce with shredded chicken, onion, and cilantro.  Stir until everything is coated in sauce.  Divide remaining BBQ sauce to top the toasted bread.  Top with chicken mixture.  Top with shredded cheese and sprinkle with red pepper flakes.  Return to the broiler and cook until the cheese is melted and bubbling.  Remove from the oven, top with fresh cilantro leaves and serve immediately.

A drink with a snack and me, a snack.

So far in Mexico we’ve eaten one poison beach ap

Good morning from me in my stretchy pants with my

A little photo album from Seattle summer 2019 with

My favorite bake of the year is these sweet lil’