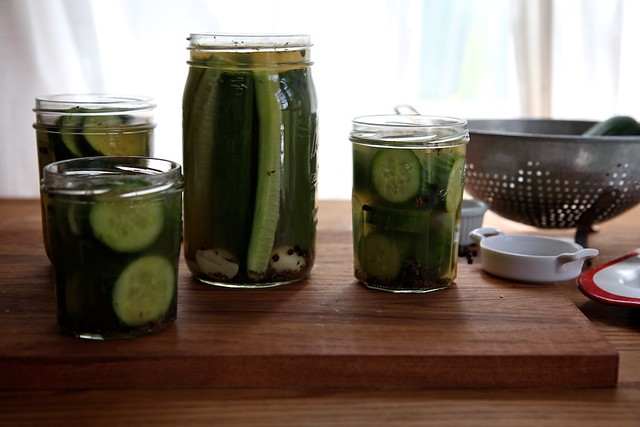 All that hard work we put in this summer… all the focus, and persistence, imagination, daydreams, lazy chats, and late sunsets…. it’s time to pack all of that up in some vinegar and spices and pickle it for the Fall.  All of that summer goodness doesn’t go away!  It’s just gets salty and tart and puts of a thick scarf for the new season.

I always have a hard time with the transition between Summer and Fall.

Summer is my favorite season, so getting into Fall is always a kicking and screaming endeavor until it’s just cold enough to eat doughnuts and hide in big chunky sweaters.

I’m trying to embrace this farewell to Summer with a little dignity and preservation… ie: pickles.

This is my first time making pickles.  It’s a whole new world!  Veggies in jars with vinegar.  Let’s ease our way in. 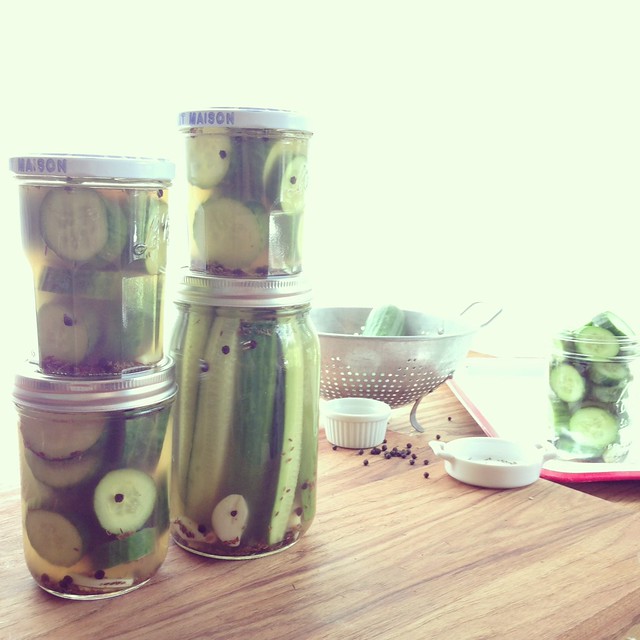 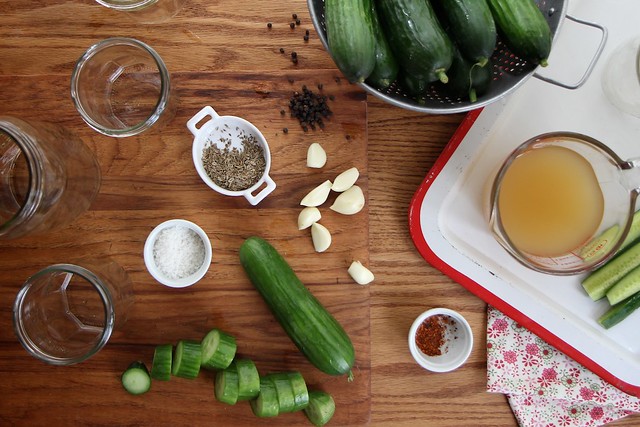 This is a small batch of pickles.

This feels like a manageable batch considering my amateur pickling skills and the small size of my refrigerator. 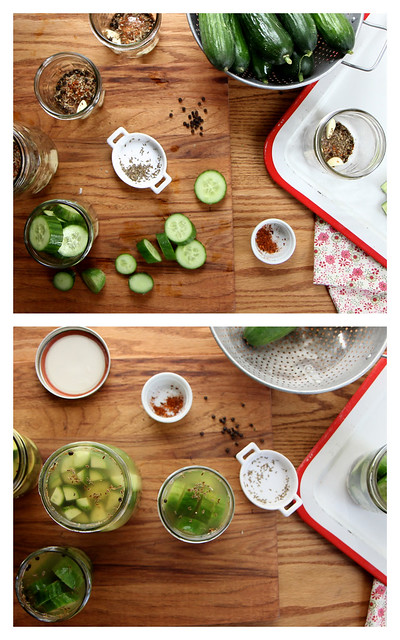 Spices like dill seed, red pepper flakes, and black peppercorn are added to the bottom of the pickle jars.  Garlic cloves too!  Let’s not forget those!

Cucumbers are packed in the jars and topped with a warm and salty vinegar-water solution.  It’s really quite simple! 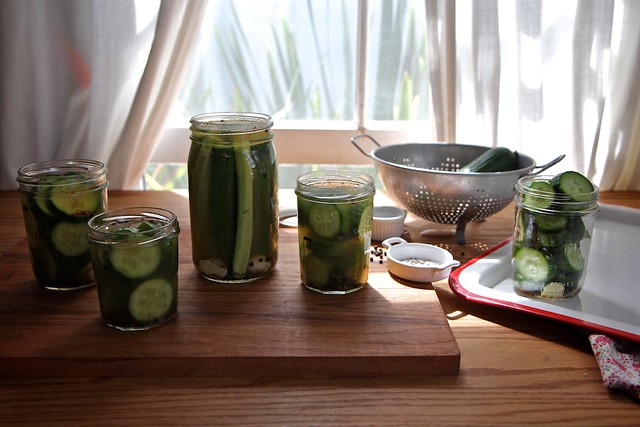 Here are some questions that might come up for you, because they came up for me.  Do I really need pickling salt?  Can’t I substitute with a salt I actually have? (Yes… I sure did.) Also, why can’t I just make Strawberry Jam and call it a day.

Canning can feel a bit daunting, but there are ways to get the canning fix without being entirely overwhelmed.

I’ve found some wonderful recourses are Food in Jars: Preserving in Small Batches Year-Round by Marisa McClellan, and Canning and Preserving by Ashley English.  Love both!

Also… the pickles are spicy and stellar!  Next up: scarf shopping.

inspired by The Kitchn

In a medium saucepan, bring vinegar, water and pickling salt to a simmer.  Once simmering, remove from heat.

Divide the spices between three clean pint jars.  Add the sliced cucumbers and pack tightly.  You don’t want to pack hard enough to bruise the cucumbers, but make sure they’re as cozy as can be.  Pour warm brine into each jar, leaving about 1/2-inch headspace.

Tap the jars on the counter top to loosen and air bubbles.

Place lids on the jars and let cool to room temperature before storing in the fridge.

Allow to rest for 2 days before enjoying.  Pickles will last up to two weeks.

Hi sweet friends.  The calendar flipped to September without me really being able to wrap my mind around it. Here we are;  Time waits for no one.  With the flip into September we spiritually have to set aside our watermelon wedges (noooo, not yet!) and reach for the apples and cinnamon (honestly, not a bad…

END_OF_DOCUMENT_TOKEN_TO_BE_REPLACED

Hello friends! Are you ready for a little summer weekending? I’m just getting back from a few days in Puerto Vallarta, Jalisco and I’ve settled on this very important fact – the hotter the weather the better the margarita tastes. With that in mind, in these very dog days of summer, I bring you the…