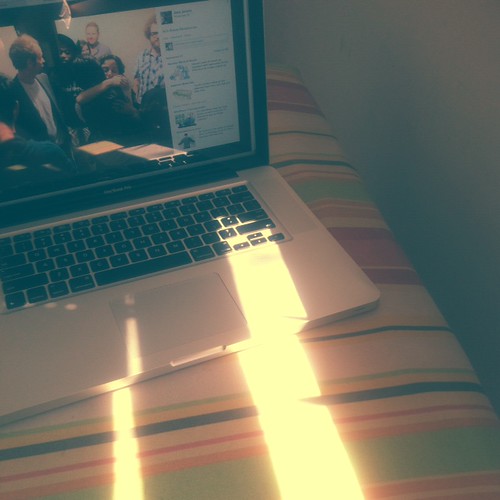 I accidentally saw a picture of you because you are still a friend of a friend of the Internet.

It was a picture of a party with the appropriate amount of cool people in hip glasses… and a dude in a Paris, France t-shirt.  I didn’t know that Paris made shirts.

In this photograph, people are mid-conversation, their mouths shaped with what are surely interesting words.  One man stands awkwardly in his beard choice.  Old friends embrace center frame, most sincerely, with open clenched hands and softly closed eyes.

You stand in the back, slightly off-center, the only one looking at the camera.  You have that half-smile I recognize.  The one between pleasure and obligation.   You’re wearing your shirt the way you did… and do… down to the third button (or is that the two and a halfth button?).  You look comfortable and relaxed, with just the most tender amount of self-doubt.

You’re with a girl.  She’s brown-haired and side-swept.  I imagine that she’s the kind of girl who can easily shop for jean shorts, and speaks kindly more often than not.  She seems like the kind of girl who hates New York City because it wreaks havoc on her shoes (really she just thinks it’s a big and scary place), but once had the time of her life in Spain on a backpacking trip when she was 23.  Her gaze is focused on the embracing couple as near strangers capable of judgement.  She stands bolted next to you like you’re her anchor in the social storm.

You two seem finely matched… but what do I know?  (Nothing at all.)

I accidentally saw a picture of you and it reminded me that I was dating a man rightfully shaking his fist at God, while trying to hold my hand with the other.  I was reminded of how fiercely we tried to hold our relationship together,  and how devastated and relieved we were in its destruction.  There’s water under that bridge.

I accidentally saw a picture of you.  No big deal.  I wrote about it.