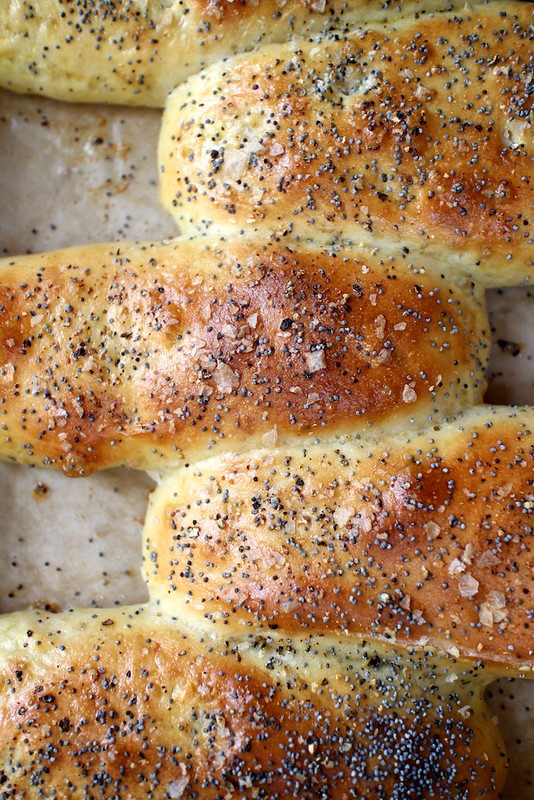 We are officially in ‘Last Meal’ territory.

It’s complicated in this brain.  Too real. 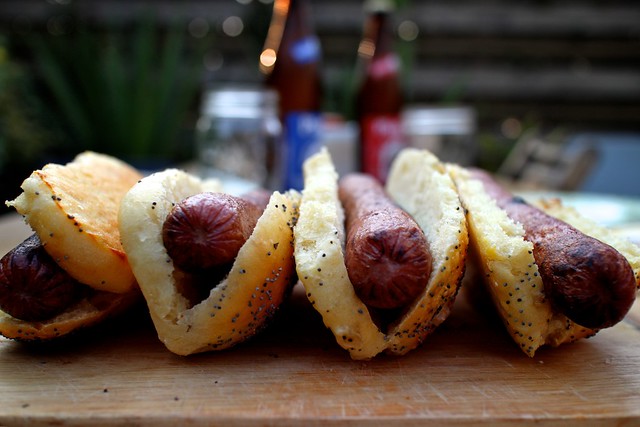 Hot dogs would totally be my last meal.  But …since it’s my last meal, these hot dogs must be exactly perfect. 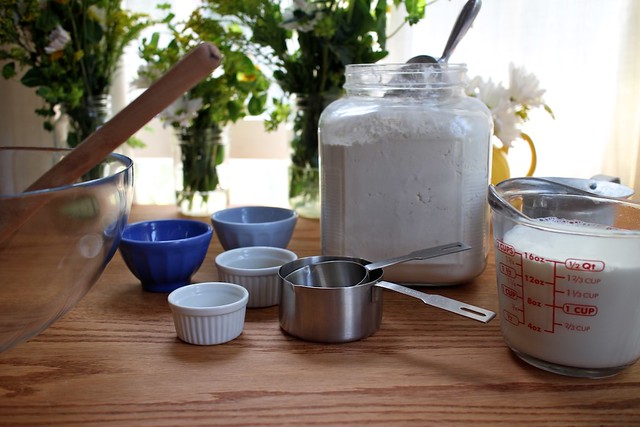 Let’s get this show on the road! 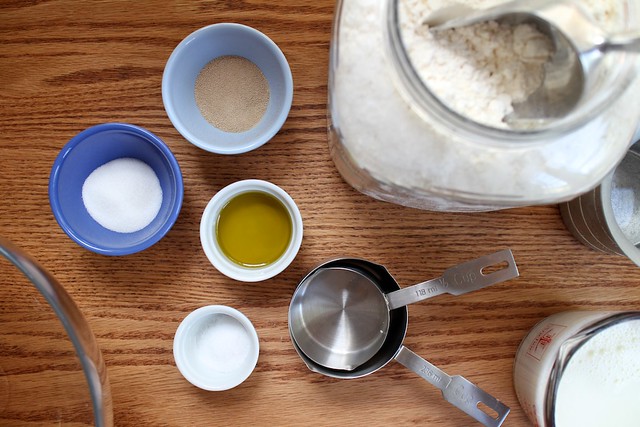 Hot dog buns are made from a yeasted dough.  For this reason they require time, patience, and courage.  We’ve got loads of all three, don’t we? 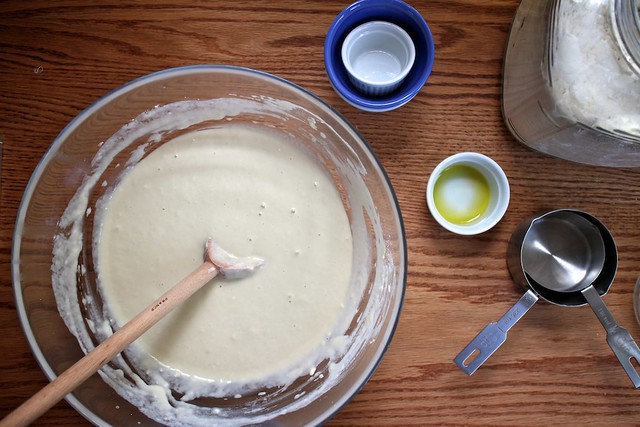 This dough comes together in a large bowl with a wooden spoon.  No mixer or dough hook required.

That also means that we have no excuses.

This dough is brought together a little at a time.  Here we have two cups of yeasty milk mixed with three cups of all-purpose flour.

It’s soupy but we’re on our way. 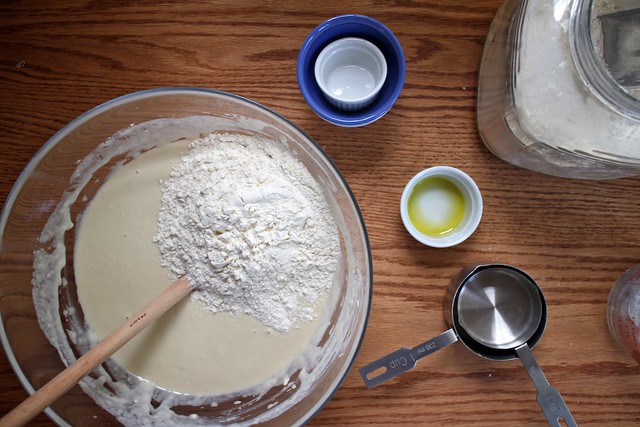 Flour is added a half cup at a time. 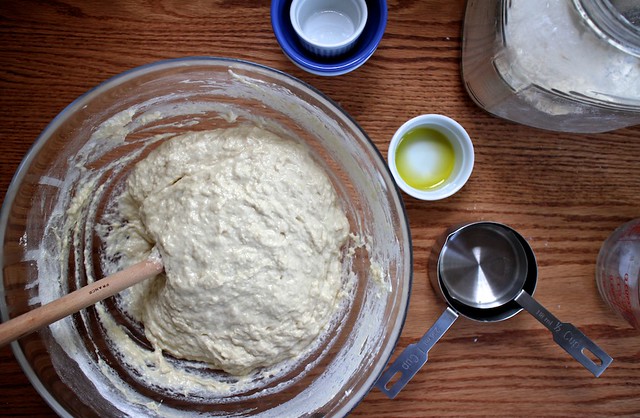 We’re getting there.  We’re trusting the process. 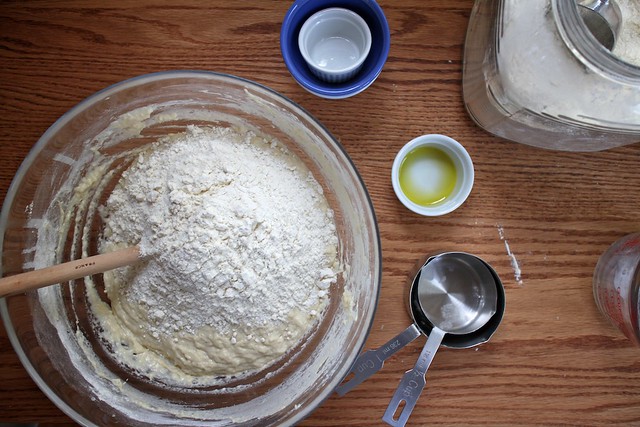 This is cup six of six and one half.  Almost there! 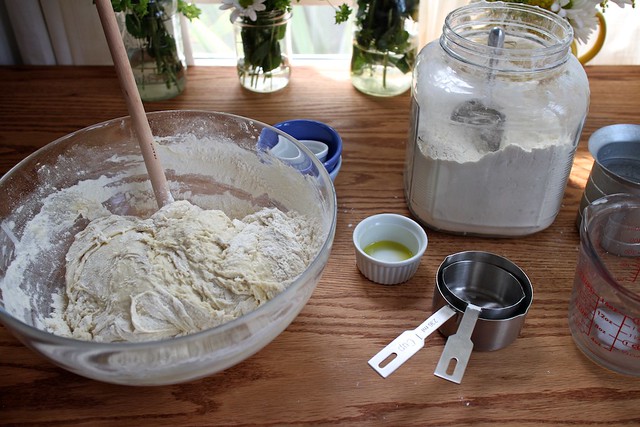 My dough was shaggy and lax.  It’s a mellow dough.  Still wet and sticky, and doesn’t want to hold its shape.  Perfect! 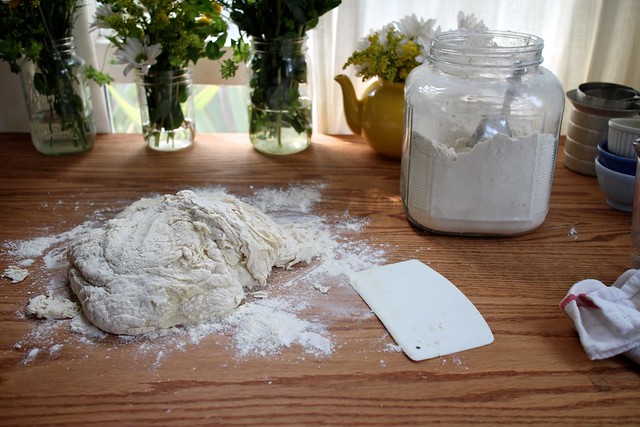 Our mellow dough can be kneaded with a bench scraper.  It’s folded and kneaded until it comes together. 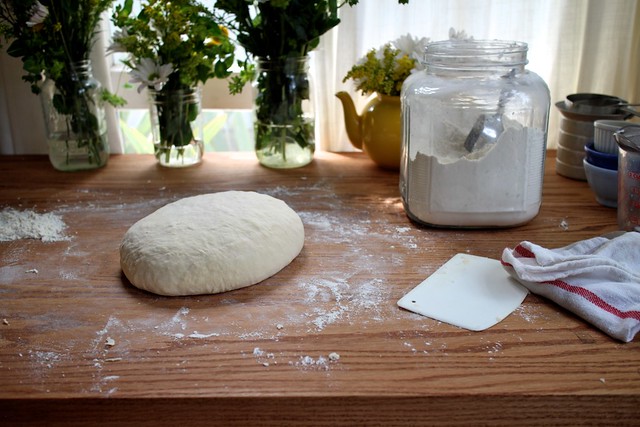 The dough should come together into a big ol’ loose dough.  Technical term. 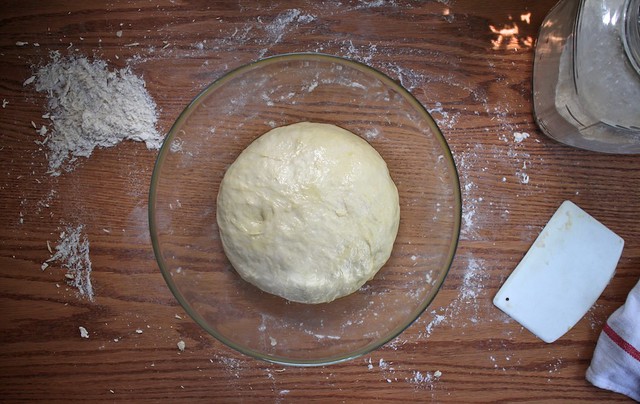 Time for oiling, resting and rising.

This dough rests until double in size. 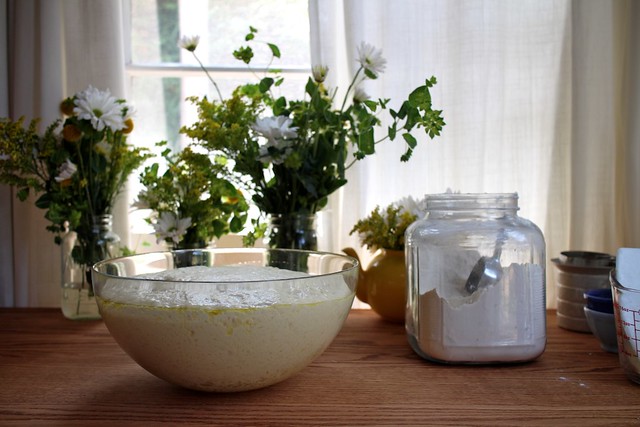 It’s time for the shaping! 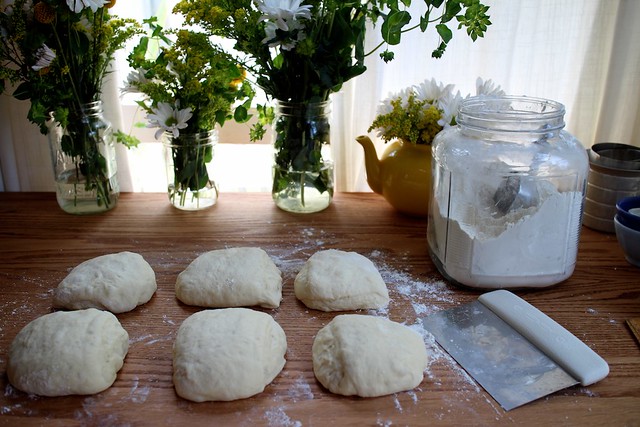 We’re going to divide the dough into eighteen pieces.

First though, we’re going to divide the dough into six pieces.  Baby steps. 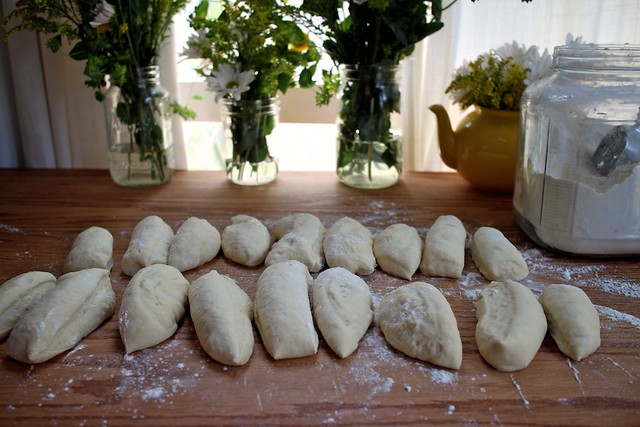 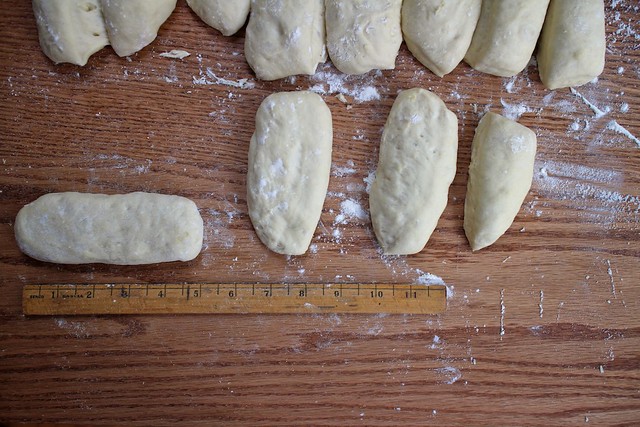 Four and a half inches long.  That’s what we’re going for. 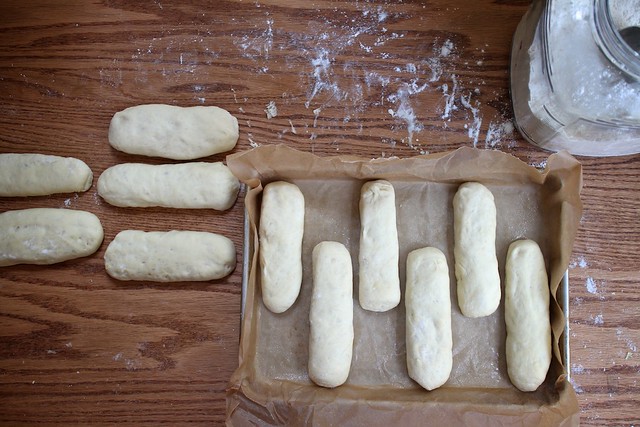 Hot dog dough gets all cozy on a tray and ready for its second rise.

It’s really important not to futz with the dough too much during and after its second rise.  You don’t want to deflate the precious rise you’ve created.  A tender hand and a light kitchen towel to cover the dough will do. 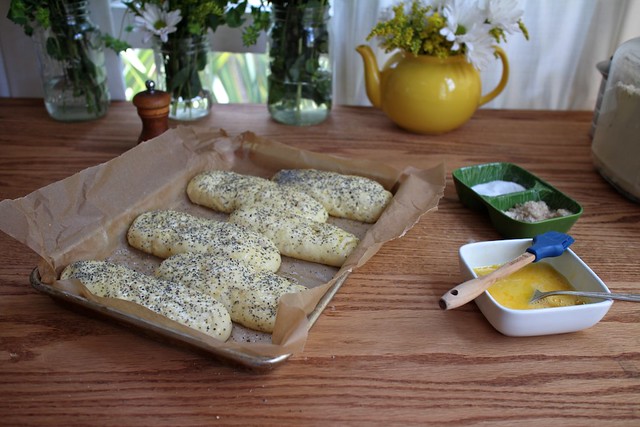 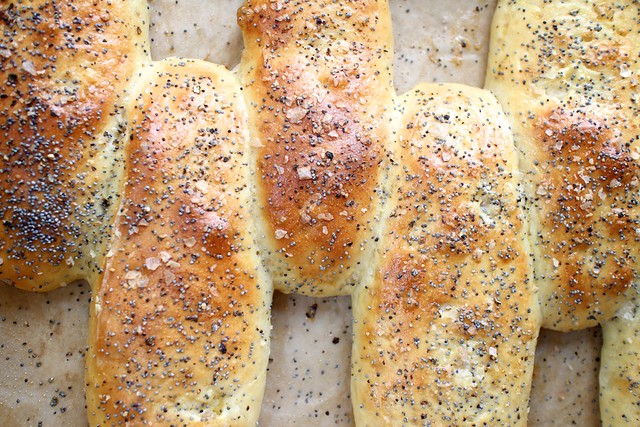 They sound hollow when tapped.  That’s how you know they’re done. 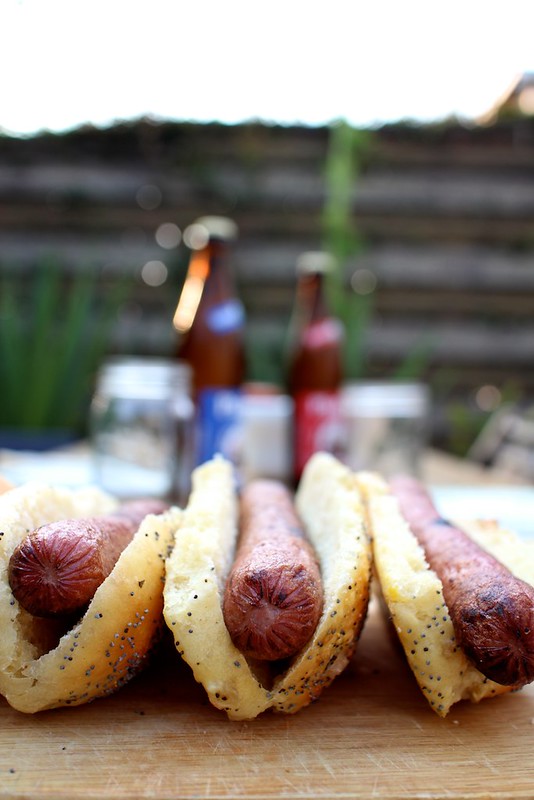 This yeasted dough is pretty forgiving, but to get the best results, try not to over-proof the dough and don’t get too touchy with it after the dough is shaped.  It’s an exercise in letting it be.

*King Arthur Flour gives a fairly wide flour measurement variation for a couple of reasons. First, you’ll find in the summer that you’ll need a bit more flour to absorb a given amount of liquid than you will in the winter. This is because it’s humid and flour acts somewhat like a slightly dampened sponge as a result.  I used 6 1/2 cups flour for my hot dog buns.

King Arthur Flour also notes that this particular dough should be quite slack, i.e., very relaxed in order to make soft and tender buns. So you want to add only enough more flour, past the 6-cup point, to make the dough just kneadable; sprinkling only enough more to keep it from sticking to you or the board.

To mix the dough:  In a large bowl, dissolve the sugar and then the yeast in the warm water. Add the milk, oil, salt and 3 cups of flour to the yeast mixture. Beat vigorously for 2 minutes.

Gradually add flour, 1/2 cup at a time, until the dough begins to pull away from the sides of the bowl. Turn the dough out onto a floured work surface.

To Knead the dough:   Knead until you have a smooth, elastic dough. Because this dough is so slack, you may find that a bowl scraper or bench knife can be helpful in scooping up the dough and folding it over on itself.

To rest and rise the dough:  Put the dough into an oiled bowl. Turn once to coat the entire ball of dough with oil. Cover with a tightly-woven dampened towel and let rise until doubled, about one hour.

To shape the buns:   Turn the dough out onto a lightly oiled work surface. Divide into 18 equal pieces. This is done most easily by dividing the dough first into thirds, then those thirds into halves, then the halves into thirds.

Roll the dough into cylinders, 4 1/2-inches in length. Flatten the cylinders slightly; dough rises more in the center so this will give a gently rounded top versus a high top.

Second Rising: Cover with a towel and let rise until almost doubled, about 45 minutes.  Just drape a towel over the buns for the second rose, a piece of plastic wrap may stick and deflate the buns when the plastic is removed.

To Bake:  Fifteen minutes before you want to bake your buns, preheat your oven to 400°F. Just before baking, lightly brush the tops of the buns with the egg wash and sprinkle with whatever seeds strike your fancy.

Bake for 20 minutes or until the internal temperature of the bread reaches 190°F. (A dough thermometer takes the guesswork out of this.)

When the buns are done, remove them from the baking sheet to cool on a wire rack. This will prevent the crust from becoming soggy.

Each week this fall we’ll revisit a recipe from last year’s Joy the Baker Magazine with new tips, tricks and insights.  The latest issue of my holiday magazine will hit grocery store shelves nationwide (and in Canada!) November 1st!  This week, let’s make a Sweet Potato Biscuit recipe which will serve us well on nights…

END_OF_DOCUMENT_TOKEN_TO_BE_REPLACED

Friends, I have a last minute holiday offering for you. Oh just the most pillowy-soft, tender sweet baby angel, carb-on-carb dinner rolls. I don’t know what your Thanksgiving looks like this year, certainly different than we anticipated earlier this January.   I hope that you’re finding ways to be safe and enjoy a sweet meal with…