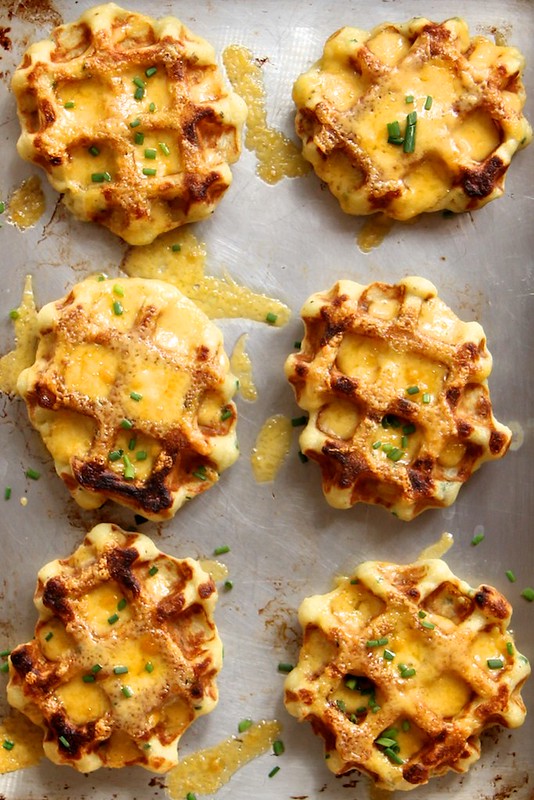 What am I going to do with all of these leftover mashed potatoes (said no one ever!)?

How is there a solution to a problem that isn’t really a problem at all? I’d eat mashed potatoes straight out of the fridge with a serving spoon. Maybe I’d put mustard and pickles on the cold mashed potatoes. That either makes me super gross or kinda genius. Most likely somewhere in between.

I’ve been daydreaming this waffle situation for a few weeks now. It’s mostly about the transformation of carbs. There’s a formula:  transform carb, add cheese, melt, sprinkle chives.  This works for any baked potato, nacho, and pizza happening.  Look how smart we are. 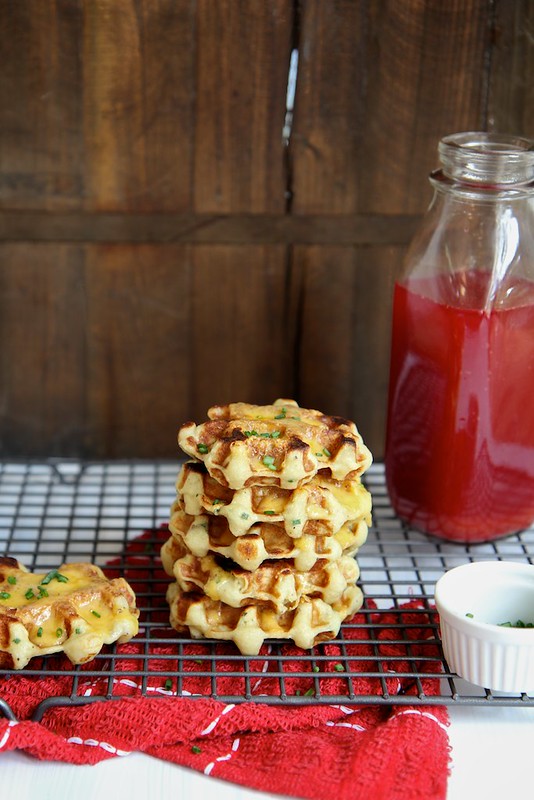 Ps.  I figured out what you’re doing this weekend.  Waffles. 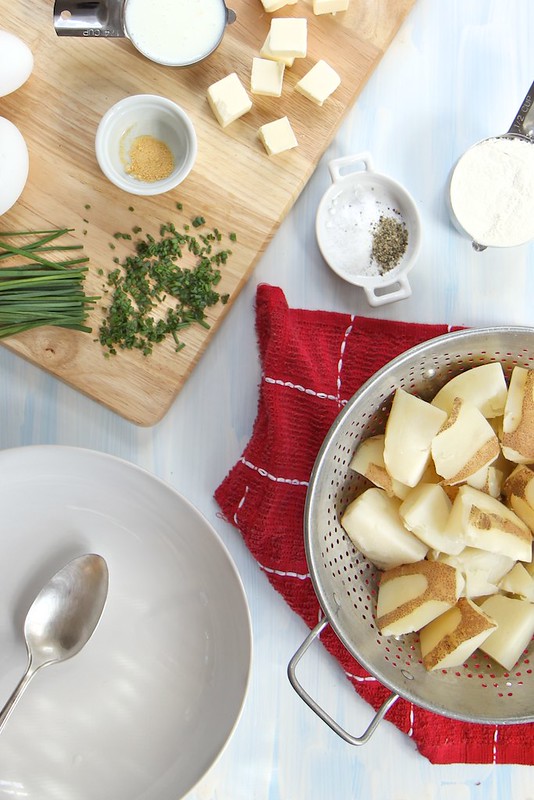 It should go without saying that Mashed Potato Waffles start with mashed potatoes.

Since I don’t often have mashed potatoes lingering in my refrigerator, I made some from scratch just for this waffle occasion. 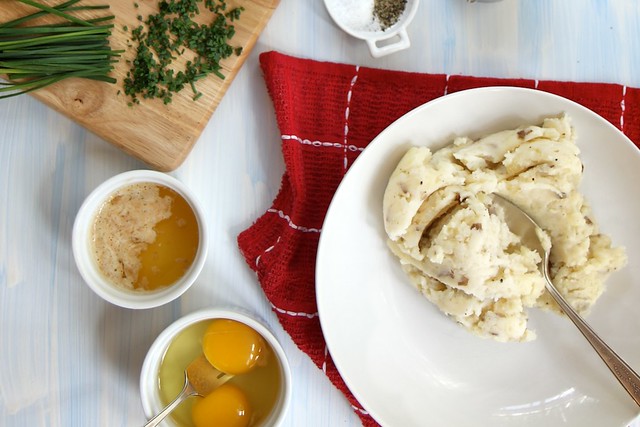 These mashed potatoes have some skins mixed in.  It’s cool to keep things rustic.

These mashed potatoes are also seasoned to taste with salt, pepper, a bit of butter, and milk.  I like to make things taste good before I mix them with other things that taste good.  Ya know? 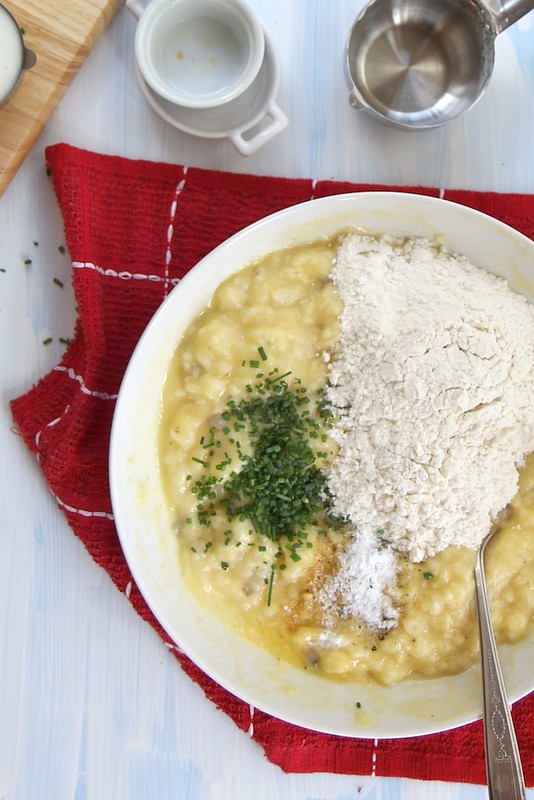 A few chives and a little mix. 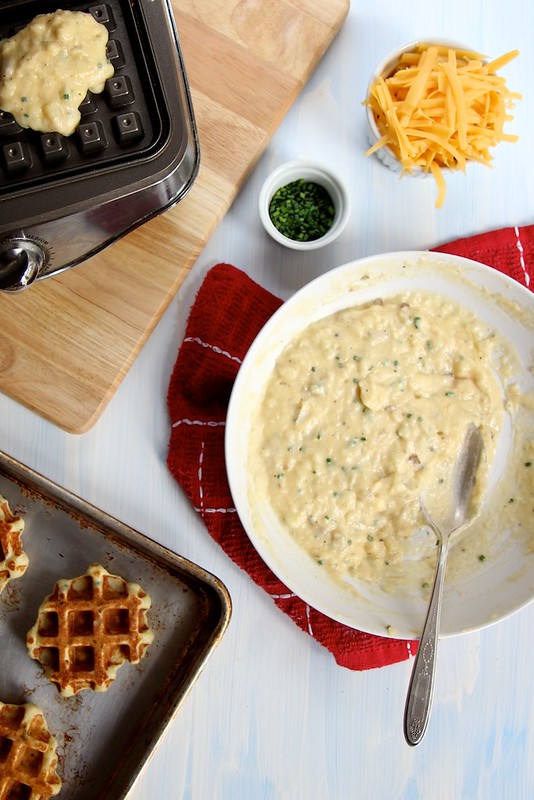 The batter has a few potato chunks.  Perfect.  I like to cook the waffles  so they bake up as slightly uneven rounds.  Cheese comes in after the waffles are baked in the iron.  Yessss….

My parents gave me this waffle iron for my birthday last year, and I quite like it a lot. 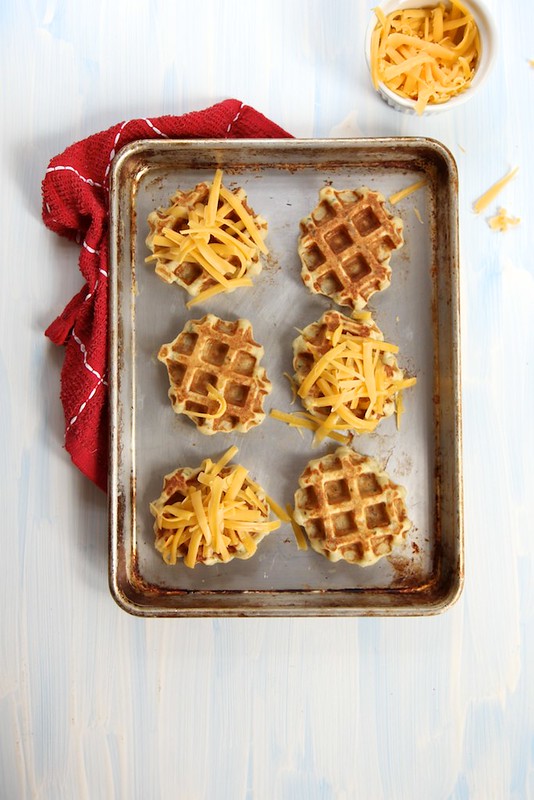 It’s time to crank the broiler!

I topped the waffles with cheese.  I’m going to melt it because that’s just what feels right. 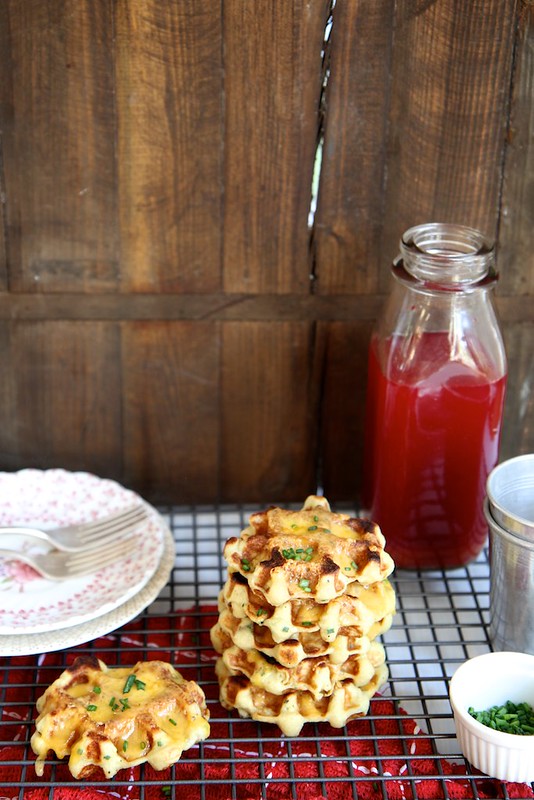 Let’s talk about these waffles… as if we haven’t talked about them enough.

They bake soft and solid.  There’s also a surprising lightness to the waffles.  I like to cool the waffles on a wire rack, because that keeps them from being soggy as they sit and cool.  A little time in the oven also helps to crisp the waffles, melt the cheese, and make things that much more enticing.  Serve with fried eggs and/or salsa?  Good idea.

Melt butter in a small saucepan over medium-low heat.  As the butter melts it will begin to crackle and pop.  That’s the water evaporating out of the butter.  Continue to cook the butter until the crackling subsides and the butter begins to brown a bit.  The butter will smell nutty.  Immediately transfer the browned butter into a medium bowl. Whisk in buttermilk and eggs until thoroughly combined.  Add the mashed potatoes and 2 tablespoons chives and gently stir to combine.

In a small bowl, whisk together flour, baking powder, baking soda, salt, pepper, and garlic powder.  Add the dry ingredients to the wet ingredients.  Use a spoon to mix until all of the flour is thoroughly combined.  Try not to overmix the batter.  Just stir it until the flour is combined.

Heat a waffle iron and grease if necessary.

Just before serving the waffles, turn oven to the broiler setting.  Place waffles on a baking sheet and top with cheddar cheese.  Place waffles under the broiler until cheese is melted, about 30 seconds to 1 minute.  Remove from the oven, sprinkle with remaining chives and serve warm (with salsa is delicious!).