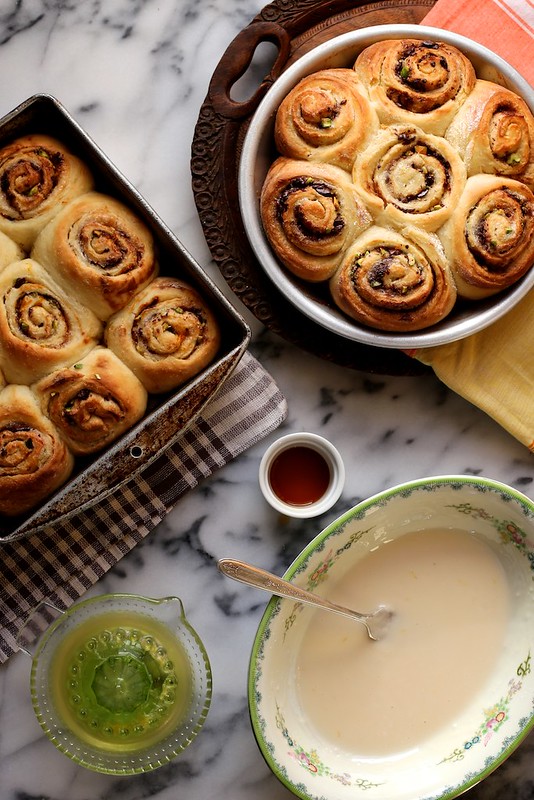 Have I told you about that one time I invited myself over to the Pioneer Woman’s ranch and insisted that she show me how to make her world-famous cinnamon rolls… at which point I twisted her arm into adding pistachios, orange zest, and dark chocolate?  Yea.  That happened.

Ree Drummond has been on of my favorite people on the internet for years. The Pioneer Woman blog has taken over the internet, for real.  I think of Ree as part mentor, part big sister, fellow butter enthusiast, and just an overall inspiring lady.  She knows how to work a blouse and she’s always smiling.  Ree is just the best.  When I invited myself over (like aaalll the way over in Oklahoma), Ree was kind enough to open her doors and feed me macaroni and cheese, cinnamon rolls, and wine.

We had the very best time together!  It rained.  Ree showed me her mom’s famous cinnamon roll recipe.  We laughed. We used an embarrassing amount of butter.  Here’s the Bonkers Awesome episode to prove it!  Please note… I’m trying my best to play it cool, but totally freaking out about being on the ranch.  It would seem that Bonkers Awesome is a series about me freaking out about meeting people who I admire.  Normal. 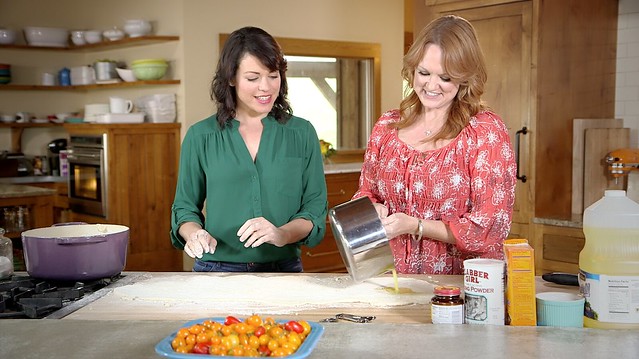 I just have to say… there are few people in the world who enjoy butter more as I do.  Ree is one of those people.  The way she poured the melted butter over this cinnamon roll dough, even I was like dang-girl-dang.  She was unphased.  It’s just a lifestyle. If this much butter goes into the cinnamon rolls, I can only imagine how amazingly buttery Ree’s mashed potatoes must be… right?  The above photograph is a picture of me looking at cinnamon rolls and thinking about mashed potatoes.  Send help. 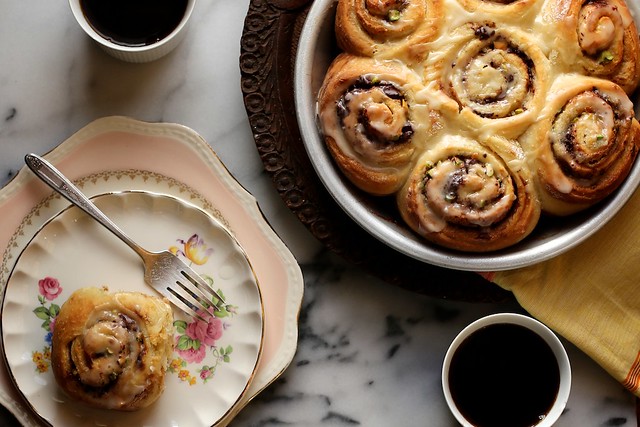 Melted chocolate, salty pistachios, and fragrant orange all packed into a gooey-centered Ree-inspired cinnamon roll?  Exactly zero things are better.  Does this scream Christmas morning to you?  What if I told you you could make them a day in advance and bake them off Christmas morning?  Yea… Happy Birthday, Jesus. 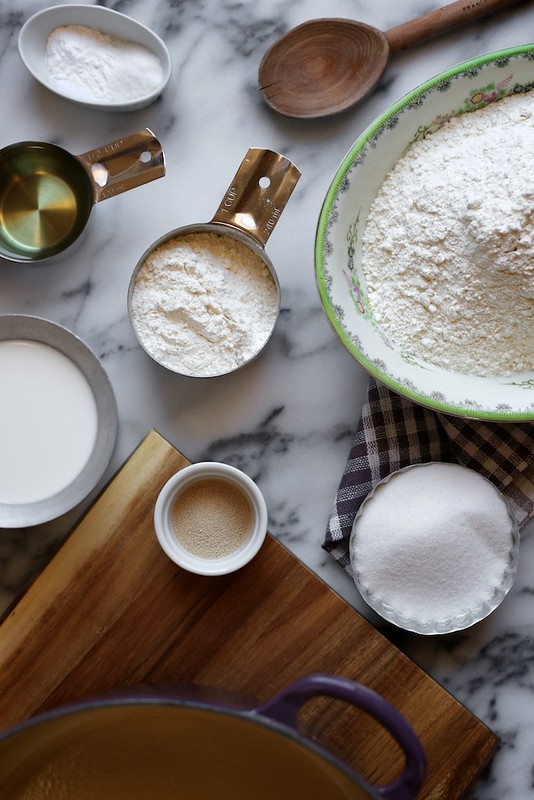 I’ve had my eyes on these rolls for years.  No joke.

The only slightly intimidating part of Ree’s recipe is that it’s (for lack of a better hyphenated word) RANCH-SIZED.  Her recipe makes about 1,476 rolls.  I’m exaggerating, but barely. Since I live more of a bunglaow-sized life, I’ve cut this recipe in half and made about 16 rolls.  Much more manageable for me. 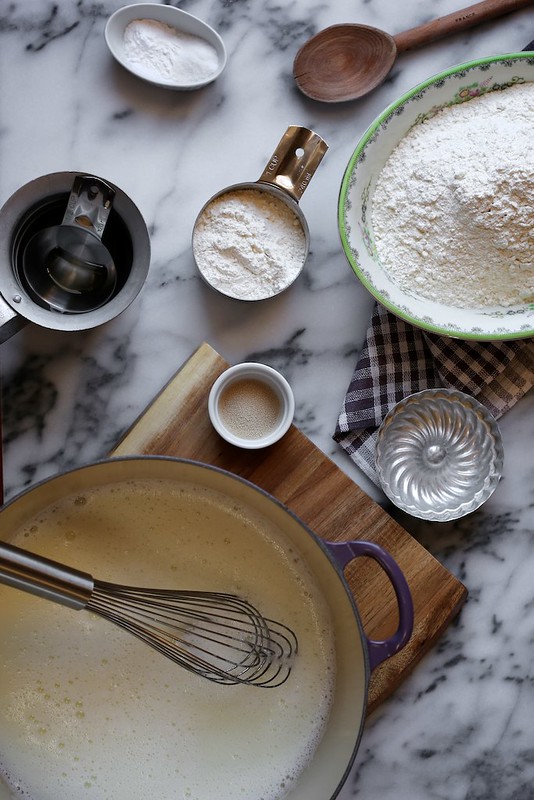 Milk, vegetable oil, and sugar are heated in the dutch oven until the milk is warm but not boiling. 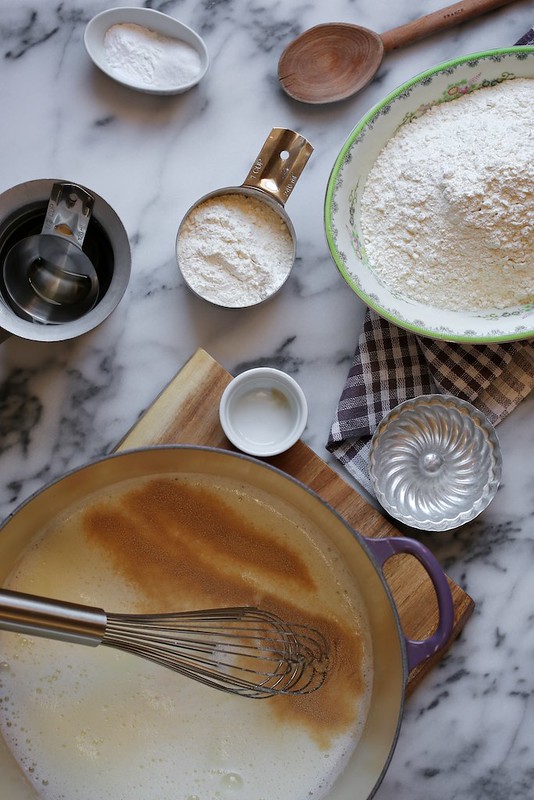 Allow the milk to cool to juuuust above room temperature before adding the yeast.  If the milk mixture is too hot, it will kill the years.  I like my milk to be about 105 degrees F.  It’s a balancing act. 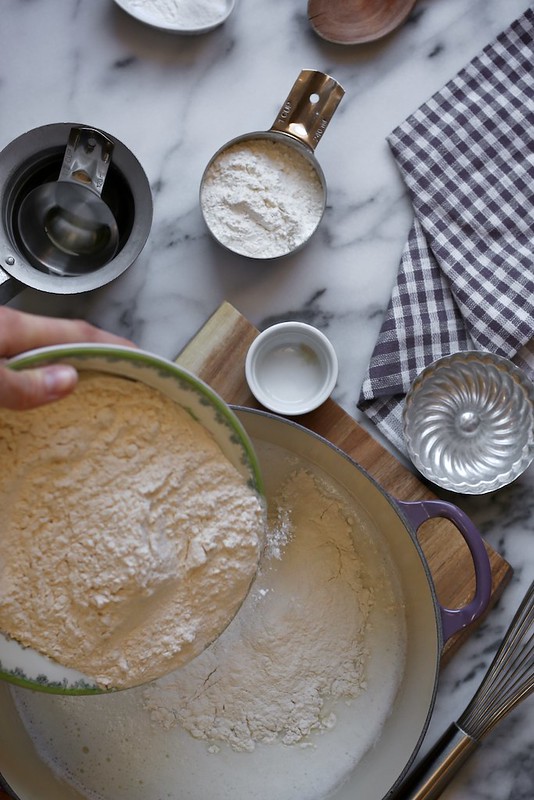 After the yeast, in goes the flour! 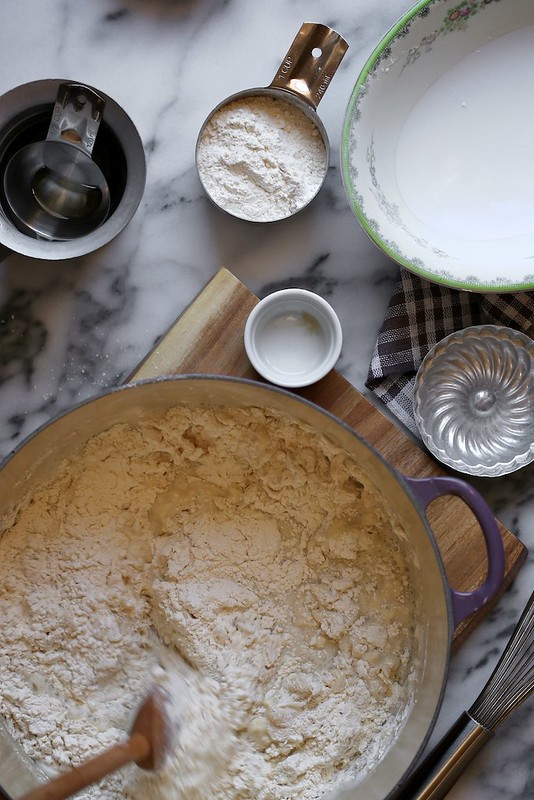 Time to stir with a wooden spoon.  This is Ree’s mom’s cinnamon roll recipe, and it feels exactly like a family recipe.  It’s not fussy.  I cherish this kind of baking. 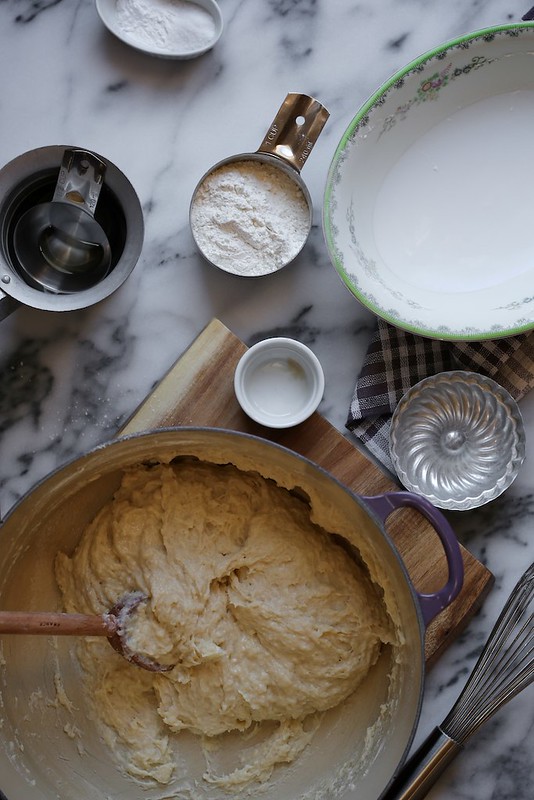 This dough is moist.  We’re going to add more flour after it rises, so we’re great for now! 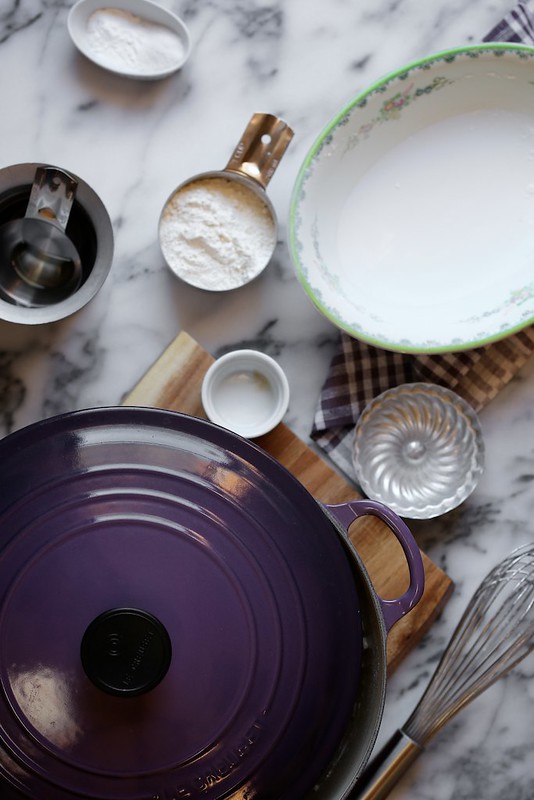 On goes the lid and off to rest and rise!

I put my pot on the back burner of the stove.  With the oven and burners off, the top of the stove is still a warm and cozy spot to rest the dough.

I checked my dough after 30 minutes to make sure that it was rising and happy.  If not… welp… time to start over (I did… it’s cool). 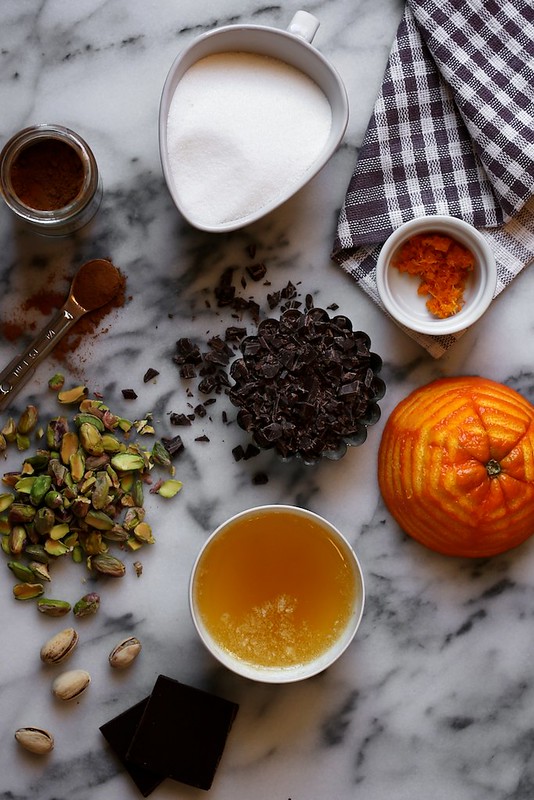 I like to buy salted pistachios in the shell and shell the nuts by hand.  You’ll get the freshest pistachio.  (And you’ll get to snack.)

Orange for that bright morning fragrance.  Zest for the rolls and fresh juice for the glaze! 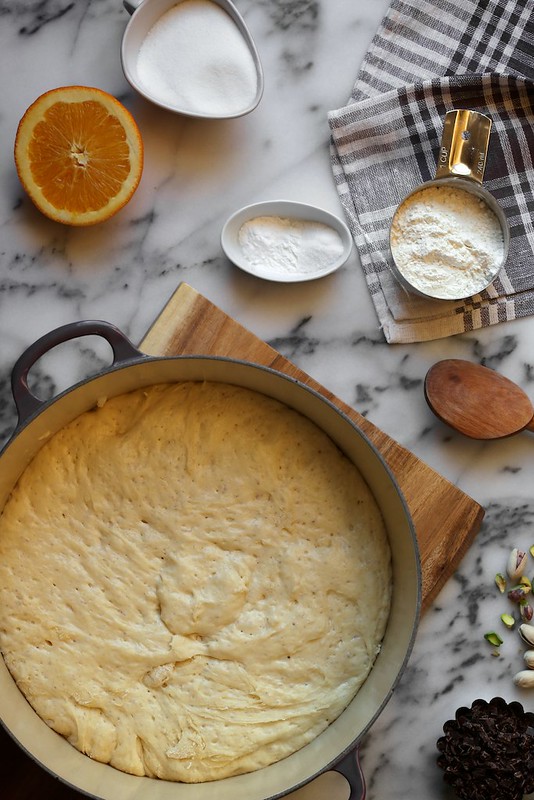 After an hour in the dutch oven the dough is this sort of fluffy. 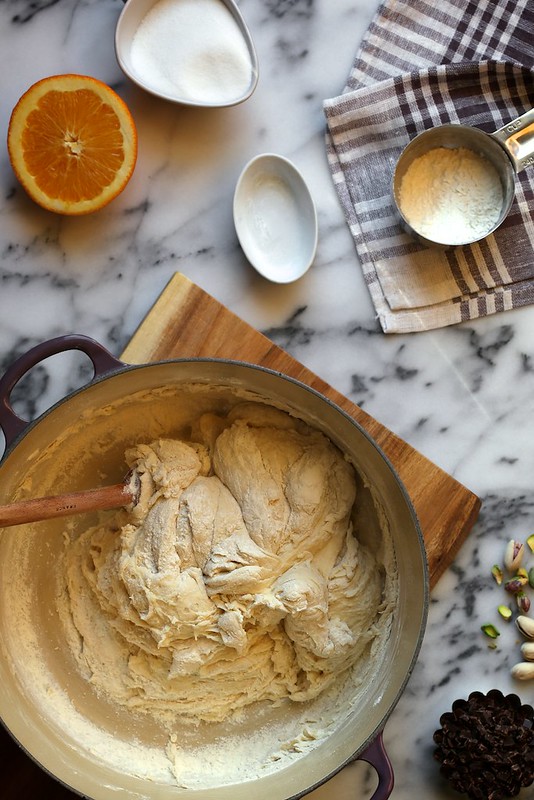 In goes another half cup of so of flour and a bit of baking powder, baking soda, and salt.

I don’t usually put baking powder and baking soda in my yeasted doughs, but when Ree says that’s what you do… that’s just what you do.

Besides, there’s nothing wrong with a bit of extra insurance when it comes to dough rising. 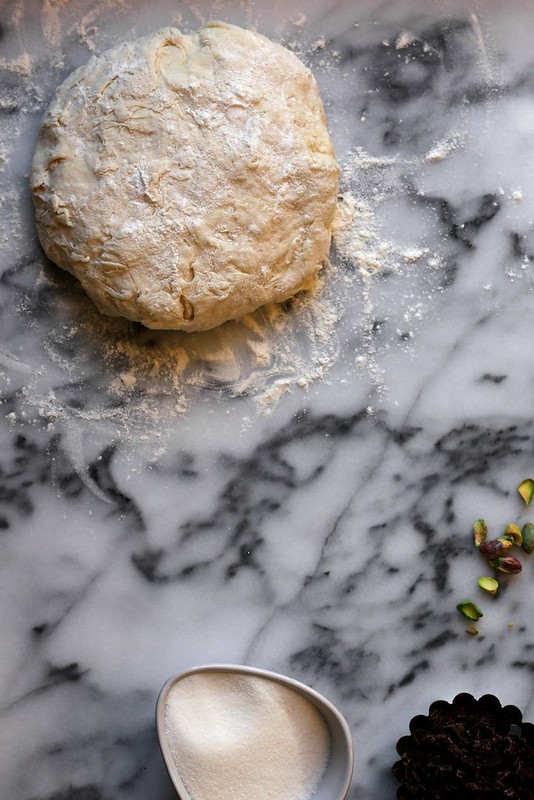 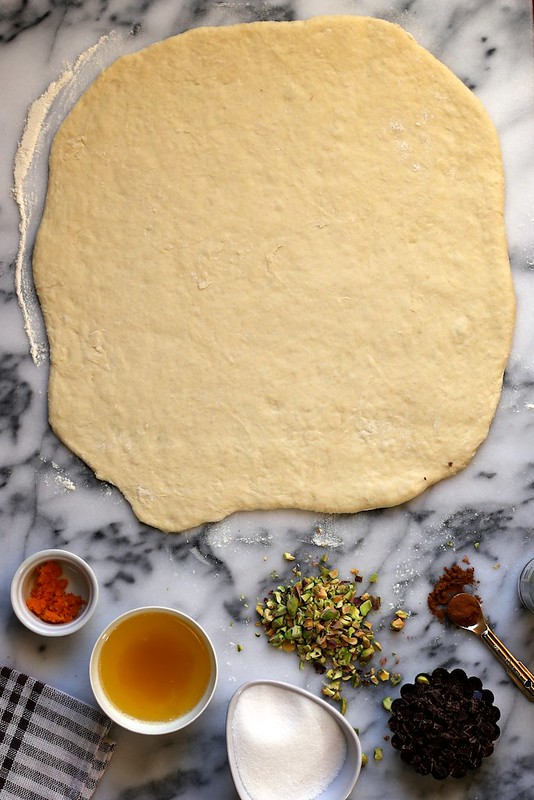 This dough is so soft and easy to work with.  Dreamy! 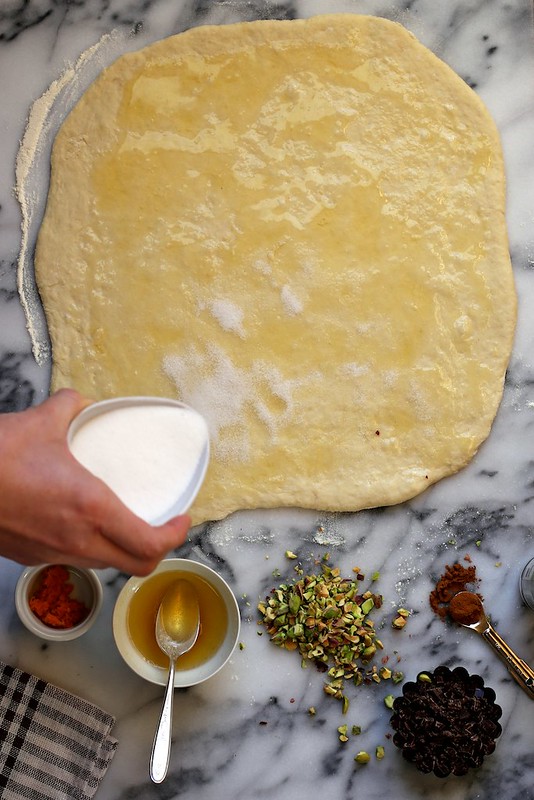 Melted butter first, then a generous amount of granulated sugar.  You can measure the butter and sugar precisely or you can just melt, drizzle and sprinkle. 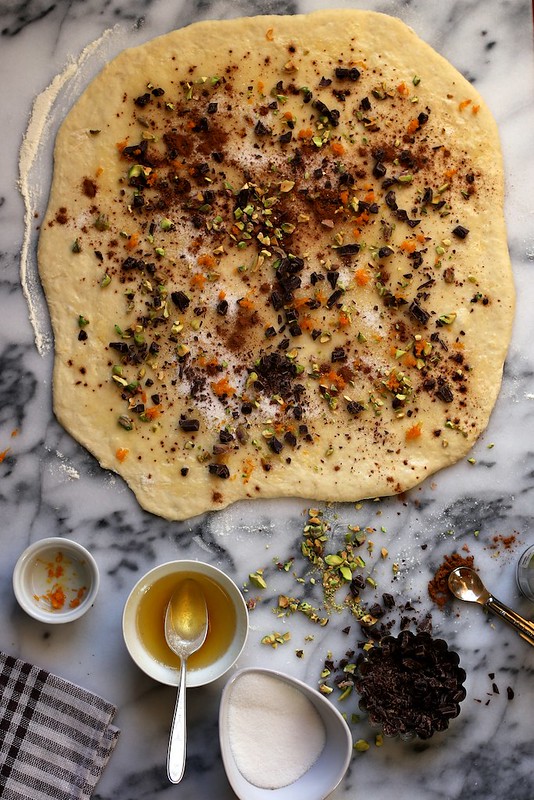 Ground cinnamon is essential.  The nuts, chocolate, and orange is just because we can. 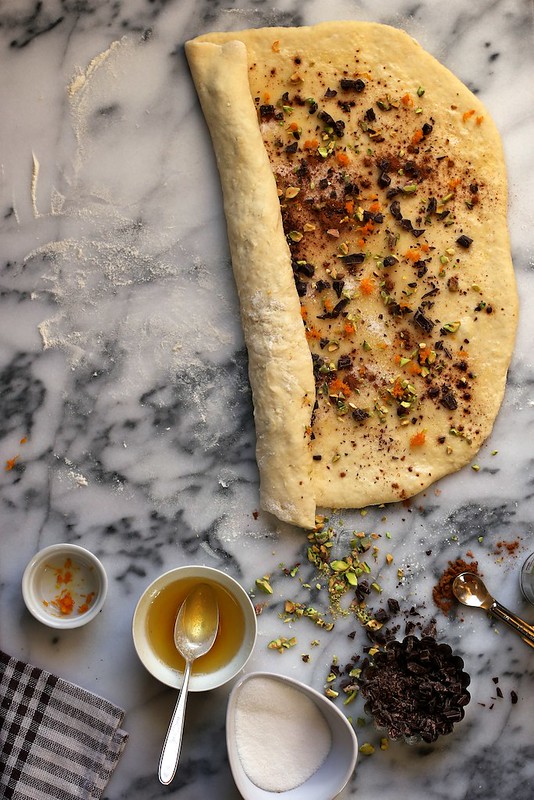 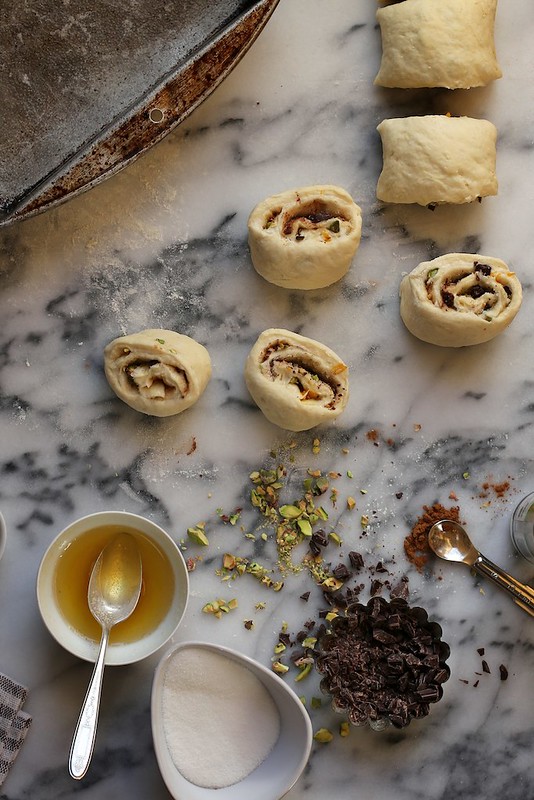 Sliced and ready for an 8×8-inch pan! 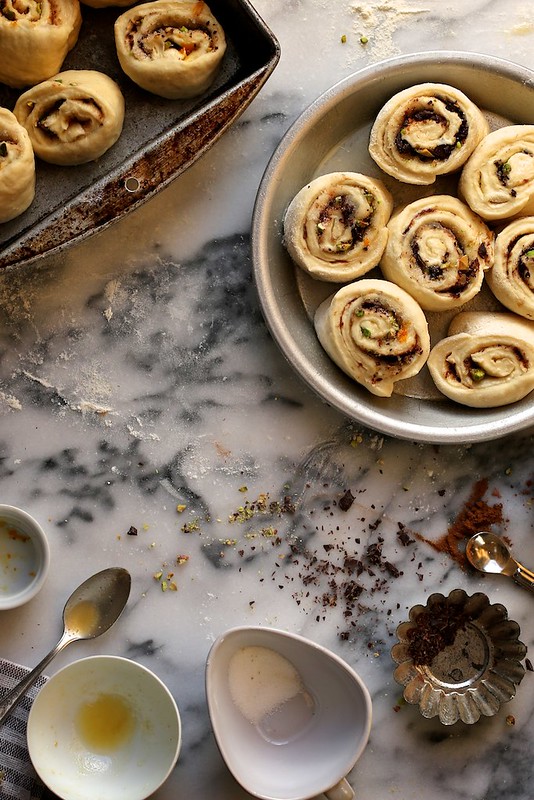 A metal pie plate also makes an excellent cinnamon roll baking device.  I love how they bake together in a round pan. 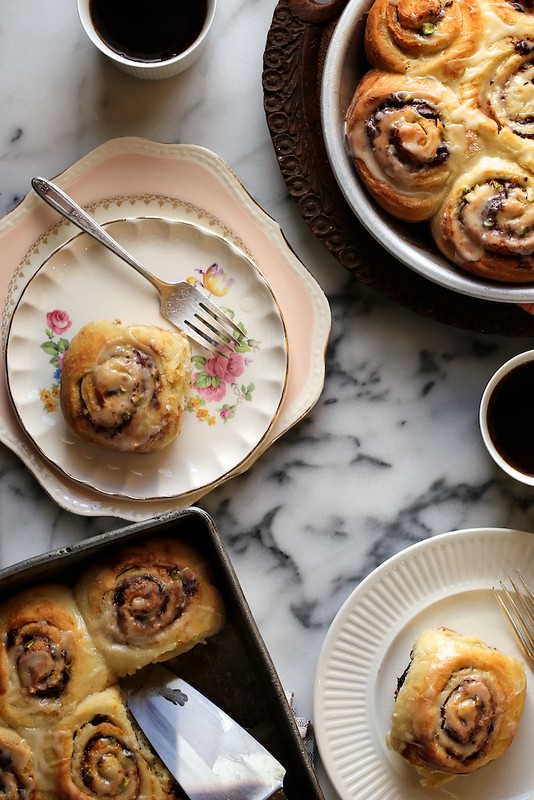 You were with me this whole cinnamon roll journey.  You know what’s up!  These rolls are beautifully soft and they smell of yeasty dough, butter, orange and chocolate.  I mean… come on!  The crunchy outsides are as good as the gooey centers.  I say that as a strict consumer of gooey centers.  These are all the way delicious.

This dough is forgiving and friendly.  You can make the dough, assemble and roll pastries, then place them (covered) in the refrigerator overnight until you’re ready to bake them.  They’ll rise just slightly in the oven, but the cold temperature will halt some of their rise.

It was such a treat to visit Ree.  It is a super-mega treat to enjoy a little piece of ranch-life in my own kitchen.  So great!

adapted from The Pioneer Woman

For the dough, heat the milk, oil, and sugar in a large saucepan (I used my large dutch-oven) over medium heat to just below a boil. Set aside and cool to warm.  You’ll want the mixture to be just warm to the touch.  Not hot at all. About 105 degreess F. Sprinkle the yeast on top and let it sit on the milk for 1 minute.

Add 4 cups of the flour directly to the saucepan. Stir until just combined, then cover with the lid to the pan (or a piece of plastic wrap if your pan doesn’t have a lid), and set aside in a relatively warm place for 1 hour.  Check the dough after 30 minutes to ensure that it’s rising well.  If the dough hasn’t risen at all, you may want to start over.   After 1 hour, remove the lid and add the baking powder, baking soda, salt, and the remaining 1/2 cup flour. Stir thoroughly to combine. Use the dough right away, or refrigerate for an hour before using.  You can also cover the dough and refrigerate to use the next morning at this stage, or you can continue on to fill and roll and slice the dough before allowing the rolls to rest in the refrigerator overnight.

Place racks in the upper third and center of the oven and preheat the oven to 375°F. Grease 2 pie plates, or 2 8×8-inch square baking pans.  Set aside

To assemble the rolls, remove half the dough from the pan/bowl. On a floured surface, roll the dough into a  rectangle, about 12 x 8-inches. The dough should be rolled fairly thin.

Now, beginning at the end farthest from you, roll the rectangle tightly towards you, finishing seam side down.  Tuck in the ends if they’re particularly loose and floppy.  Slice the dough into 8 equal slices and arrange in one of the prepared pans.  Set aside and repeat the process with the remaining half of dough and place those sliced rolls in the remaining pan.

Allow to rolls to rest for 15 minutes.

Place in the oven and bake for 20 to 22 minutes, or until the rolls are bubbling and golden brown.  While the rolls are baking, make the glaze by whisking together powdered sugar, orange juice, and vanilla extract.

Remove baked rolls from the oven.  Allow to rest for 10 minutes then drizzle the glaze over the warm rolls.  Serve warm (or room temperature, or cold… they’re good no matter what)!