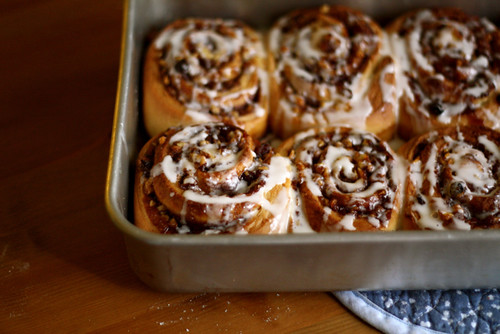 I made rolls, of the cinnamon variety.

See… there was this thing invented a good long while ago called the 10 Year Class Reunion.  It’s where you get together with all the people that made fun of you during your painfully awkward teenage years.  Yea.  Why?  Why do I have to do this?  Can’t we all just become friends on Facebook and Twitter and consider ourselves properly reunited!?

Seriously.  The future is now!

Since I think I’m going to gracefully bow out of the reunion festivities, here’s the CliffsNotes of what I might have said to my old classmates.

Hi.  Yea, it’s me Joy.  I sat behind you in.. a bunch of classes probably.  Here’s the update.  I went to college.  I read a lot of books.  I graduated.  I traveled around some.  I haven’t gotten married or pregnant yet.  Yea.. I’m prettier now, but that’s mostly because I was actually really ugly when you knew me.  I’m a baker.  I think it’s the most awesome thing ever.  I know a crap ton about food.  Would you like to discuss French cheeses at all?  I have a blog… also awesome.  Sure, I’d like to meet your boyfriend Steve.  I recognize him from your Facebook photos.  Your relationship status is “complicated” though… care to discuss?  No?   Hm… well, sure I’d like to see pictures of your kids.  Would you like to see pictures of my cinnamon rolls?  It’s only fair.

I need counsel and another cinnamon roll. 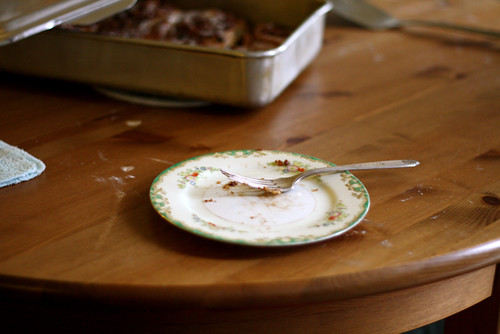 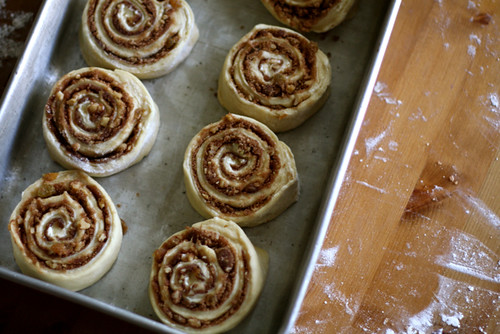 These cinnamon rolls are nothing short of amazing.  The cream cheese is folded (literally) into the dough, creating an extra moist, truly irresistible roll.  They take time… sure.  Yes.  But when it comes to things like your 10 Year Class Reunion… you just take the time to make the rolls.  It’s necessary.

Below the recipe are my step by step photos, in case you get knee deep into the recipe and panic.

8 Tablespoons (1 stick) unsalted butter, at room temperature, plus more for the pan

In the bowl of a stand mixer combine yeast, 1/2 teaspoon sugar and 1/4 cup water heated to 115 degrees F.  Stir to combine and let sit until frothy and foamy, about 10 minutes.

Add remaining sugar, milk, light brown sugar, vanilla, egg, and egg yolk.  Beat with a wire whisk until well combined.  Fit the bowl onto the mixer, fitting with the dough hook attachment.  Add the flour and salt and mix on medium speed until the dough just begins to come together.  Turn the machine on medium-high and knead the dough for 4 minutes.

Add the butter and continue to knead for about 6 minutes.  The dough will the wet and sticky.  Place the dough on a well floured work surface, and knead about 1/3 cup all-purpose flour into the dough.  Don’t worry, the dough still might be a little sticky.  It’s ok.  Just set the dough to rest in a large greased bowl.  Cover the bowl with plastic wrap and a kitchen towel and allow to rise in a warm place for 1 1/2 to 2 hours, or until doubled in size.

While the dough rises, make the filling.  Combine the sugar, dark brown sugar, pecans, walnuts, raisins, cinnamon, salt and cloves in a large bowl.  Stir to combine.  Stir in the maple syrup.  Set aside.

When the dough has doubled in size, dump if from the bowl onto a heavily floured work surface.  Gently knead the dough until it is no longer sticky, adding more flour as needed.  I think I added about 3 Tablespoons of flour.  Work the dough for about 1 or 2 minutes.  Once it’s no longer sticky, place a kitchen towel over the dough and let rest for 5 minutes before you roll it out.

Using a floured rolling pin, roll the dough into a 10 x 10-inch square.

In a small bowl, mix the cream cheese with a knife until it’s smooth and spreadable.

Spread the cream cheese evenly over the dough square.  Fold the square into thirds like you would fold a letter to fit into an envelope.  Take the open ends of the rectangle and fold into thirds again, to make a smaller dough square.

Invert the dough so that the seam is face down and, using the rolling pin, gently roll it into a 10 x 20-inch rectangle.  You make find that some cream cheese sneaks through.  Be as gently as possible with the dough, but continue to work it until you reach the size you need.

Brush the top of the dough with half of the melted butter.  We’ll use the rest of the butter after the rolls are baked.

Using your hands, lift up the bottom edge of the dough and roll it forward into a tight cylinder.  Place dough cylinder seam side down on a cutting board.  Using a sharp, thin knife, trim off the uneven edges.

Cut cylinder into 8 equal slices.  Nestle the slices, cut side up and evenly spaced in a butter 9 x 13-inch (light colored) metal baking dish.  Cover pan with plastic wrap and set aside in a warm place to let rise for 2 hours.  You may also refrigerate rolls overnight.

Heat the oven to 375 degrees F.  Uncover the rolls.  If you refrigerated the rolls, let them sit at room temperature for 15 minutes before baking.  Bake until golden brown and a toothpick inserted in the center comes out clean, about 30 minutes.

Make the icing:  While the rolls are baking, whisk together the sugar and buttermilk in a small bowl until smooth.

Transfer the pan of cinnamon rolls to a cooling rack.  Brush with remaining butter.  Let cool for 5 minutes.  Dip the tines of a fork into the icing and drizzle over the rolls.  Serve immediately. 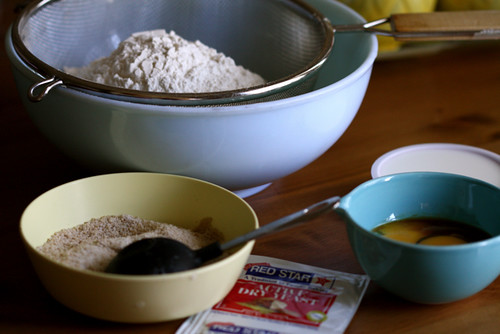 Some of the stuff you’ll need. 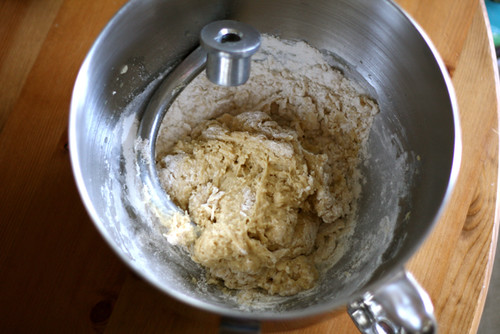 This is what the dough looks like as it’s coming together after the flour is added. 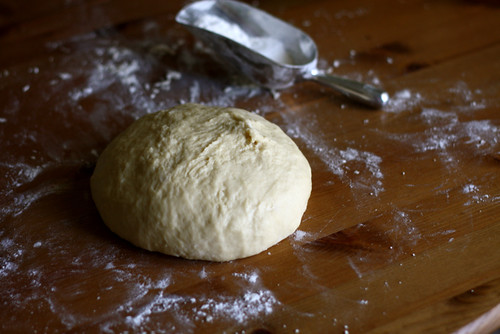 After kneading in the mixer for 10 minutes, I took the dough out, added 1/3 cup more flour and kneaded. 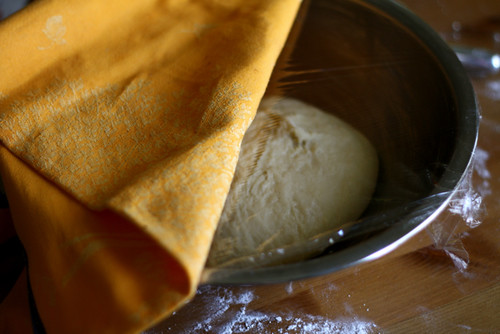 Gettin’ ready for the first rise. 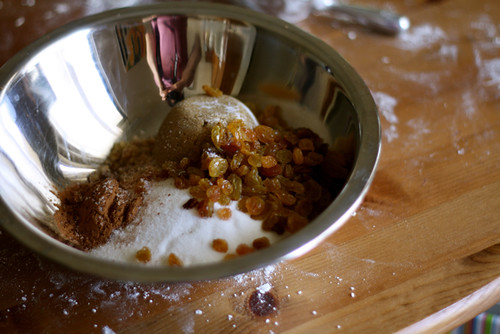 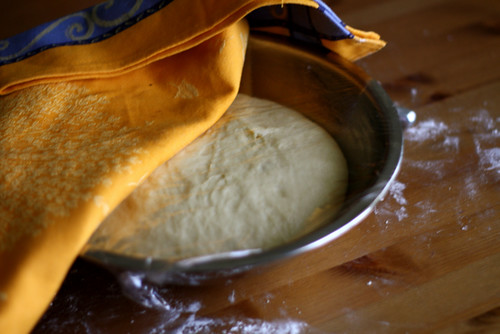 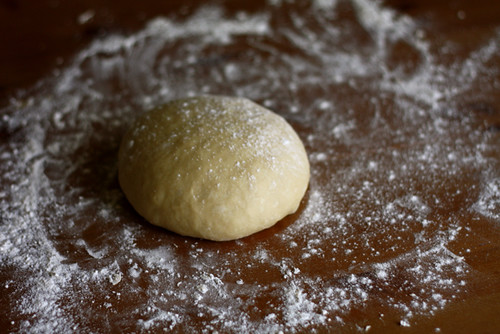 Knead the dough on a heavily floured surface, adding more flour so the dough is no longer sticky. 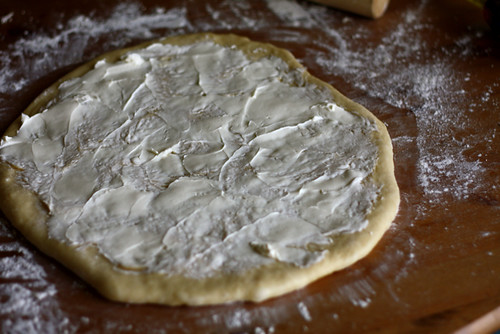 Roll that darling in a 10 x 10-inch circle and cream cheese it! 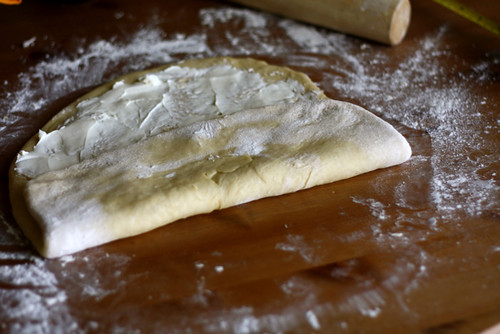 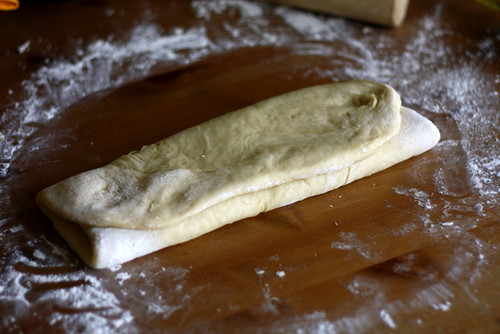 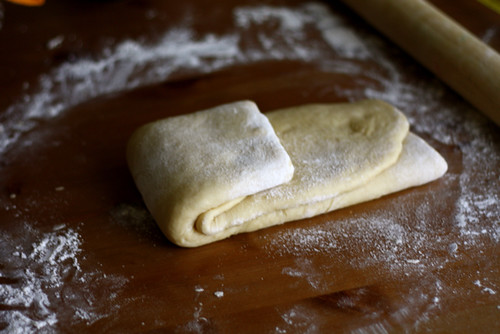 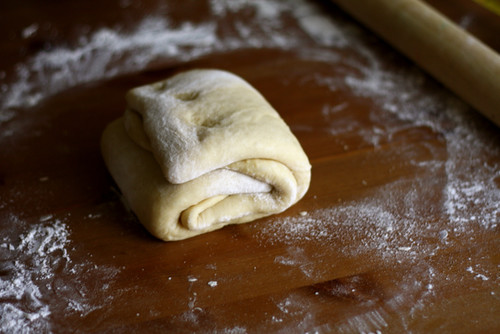 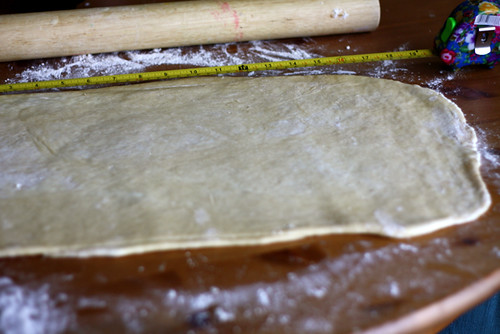 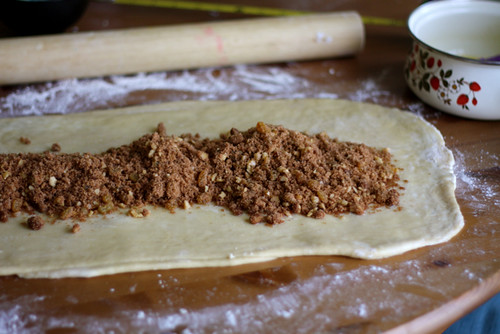 Time for the good stuff. 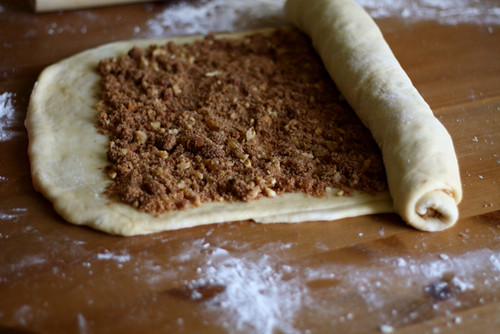 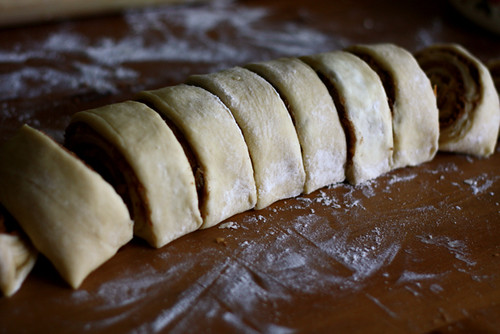 Trim the edges and slice into 8 slices. 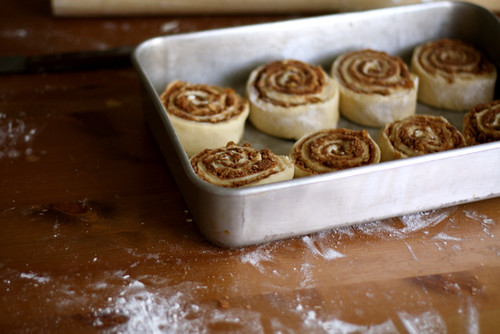 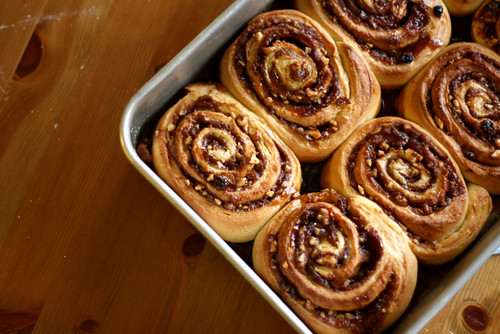 Solo homeowner tip #12: I always keep a batch of E