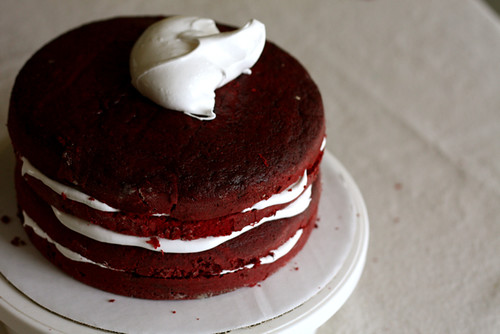 Ooooh God.  This is embarrassing.  This is about to happen.

Here’s a small excerpt from Joy’s (before she was the Baker) diary circa late 1996.  I had strong feelings about a lot of things back then… my first crush named Hayden, my best friend turned enemy, the television show Seinfeld, making the volleyball team and…. MTV’s The Real World.  Yea… I’m not so sure about that last one either.  I dunno.  Here’s an actual excerpt:

Reasons to be on Real World…

2) I’m funny… so how bout them Dodgers… who’s on first… knock knock.

5) I’m from Los Angeles… with bright lights and clear skies.

My heavens! I laughed out loud when I found this little gem in my teenage diary. Ooooh but believe me… that little book is full of all sorts of priceless wallowing and poetry so terrible… so foul… that I can barely even stand to revisit it. This little list though…. hot dang… so funny.  I think I love reason number three the most.  Why did I feel the need to put the ‘woman’ in parentheses?  My heavens.  What a weirdo.

I just had to get that off my chest… now, cake. 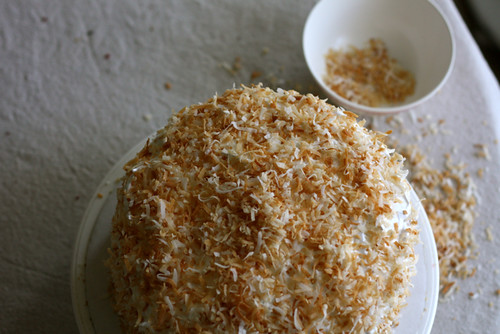 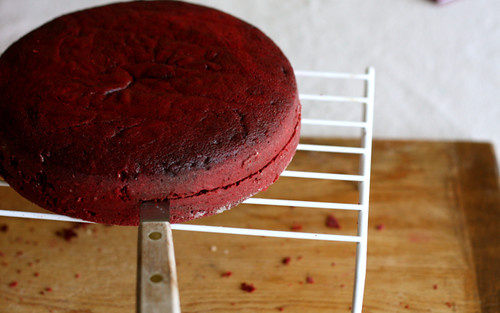 I have gone through many a Red Velvet Cake recipe but I’ve finally found my favorite.  The Humming Bakery Cookbook is just a dream when it comes to cakes and cupcakes.  I turned my favorite Red Velvet Cupcakes into a cake with Fluffy White Seven Minute Frosting and topped with whole monster with toasted coconut.  The recipe has a good dose of cocoa powder and buttermilk, making the cake both flavorful and moist.  This beauty makes for a super lovely party cake.  It’s impressive.

Can’t imagine Red Velvet without Cream Cheese Frosting… we’ve got that recipe too! 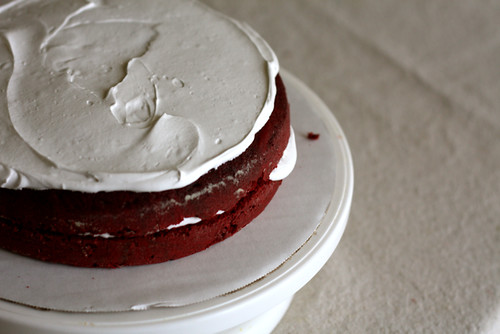 In the bowl of a stand mixer fit with a paddle attachment, cream the butter and sugar until light and fluffy, about three minutes.  Turn mixer to high and add  the eggs.  Scrape down the bowl and beat until well incorporated.

In a separate bowl mix together cocoa, vanilla and red food coloring to make a thick paste.  Add to the batter, mixing thoroughly until completely combined.  You may need to stop the mixer to scrape the bottom of the bowl, making sure that all the batter gets color.

Turn mixer to low and slowly add half of the buttermilk.  Add half of the flour and salt and mix until combined.  Scrape the bowl and repeat the process with the remaining milk and flour.  Beat on high until smooth.

Turn mixer to low and add baking soda and white vinegar.  Turn to high and beat a few more minutes.

Spoon batter into prepared cake pans and bake for 25-35 minutes or until a skewer inserted into the center cupcake comes out clean.

Let rest in the pan for 20 minutes, then invert onto a cooling rack to cool completely before frosting. 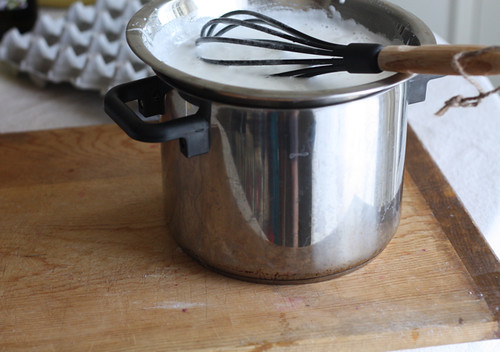 Transfer bowl from pan to folded kitchen towel on counter and continue beating until mixture is cool and billowy, about 2 minutes more. Beat in vanilla. (Frosting can be made 4 hours ahead and chilled, covered.) 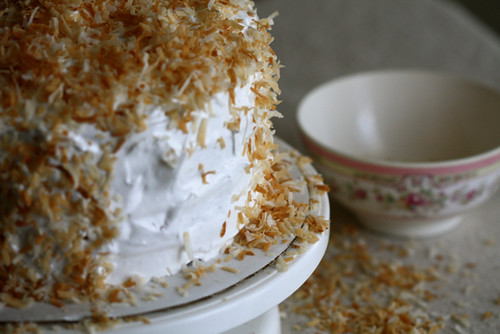 Spread coconut on top of a foil lined baking sheet.  Bake at 350 degrees F for 6-10 minutes, tossing coconut occasionally so it browns evenly.  Keep a close eye on the coconut, it burns quickly!

Every cake I pull from the oven, stack and frost,