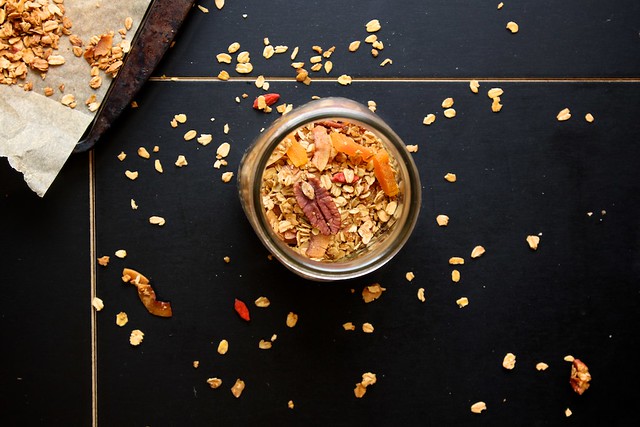 I fell in love.

I fell in love with the state of Maine.

Last week I lovingly, though hapazardly thrust tofu lemon cremes your way.  I did so from my phone on a bus driving through Maine.

See… I went on a vacation and for a work-brain maniac like mine, it seemed… hard.  Which (I know I know I know) sounds bonkers dumb.

I went to a place that solved many, if not all, of my work-brain maniac problems.  Maine Maine the state of Maine!  Maine doesn’t glorify work-brain-busy.  Maine glorifies big blue skies, small farms, chicken coops, bee-keeping, and the connection of people over, well… my connection to the internet.  It was just what I needed and I’m absolutely smitten.

Today I want to show you a particular part of my trip to Maine.  It involved big sails, gusting winds, sailors, lobster, and big hearts.  This leg of my Maine journey left me craving the comfort of Maple Granola… and that’s what bring us to this here point. 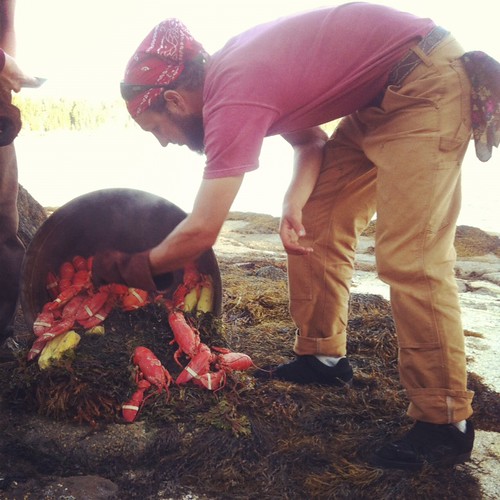 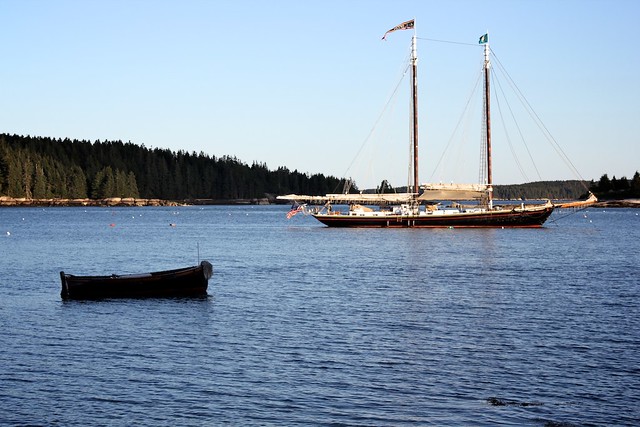 This is the J & E Riggin.  It’s a national historic landmark… which is pretty incredible considering that I slept inside of her.  The J & E Riggin was built in 1927 as an oyster dredger.  Back in the day it was manned by seven big ol’ sailor dudes who worked this schooner up and down the coast of Maine collecting massive amounts of oysters.  The schooner was transformed into a passenger boat in 1977.

These days the J & E Riggin is run and loved by Captain Jon Finger and Captain Annie Mahle.  Each summer John, Annie, their daughters and sea family welcome people onto the schooner for 4 or 6 day adventures.  When I say adventure… I do mean it!  Cabins on the boat are small,cozy and are equip with a small cold water sink.  Ok… I had one mild cabin freak-out because I’m a touch bit claustrophobic.  Nothing a little red wine can’t solve.  Besides, not much time is spent down in the cabins… 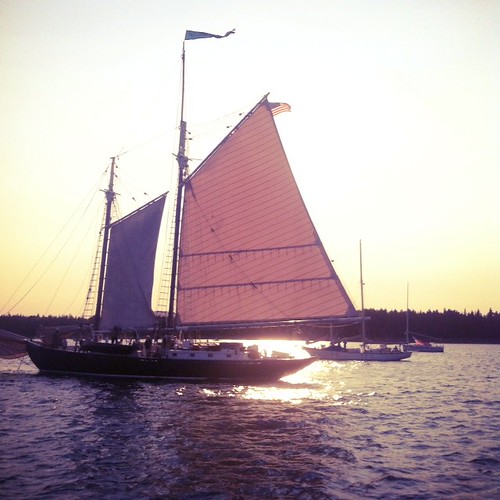 … not when view like this exist up on deck.

This is a neighboring boat.  I’m pretty sure we’re racing. 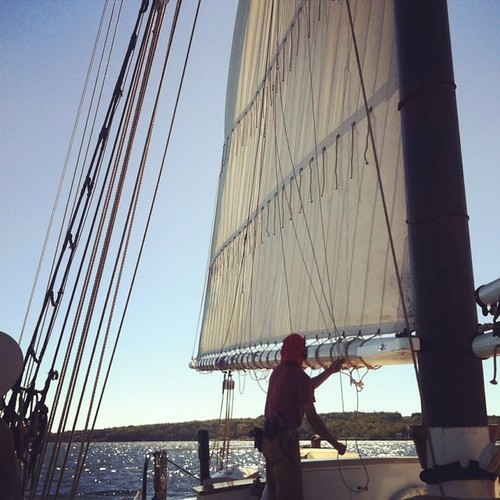 Schooners like the Riggin are no joke.  They take knowledgable people and strong hands to run.  The guests help to raise sails, fold sails, do their dishes and pull in the anchor.  It takes a village… and we’re not even raising a child.

Here, First Mate Scott is doing some sort of something to the sail.  Porting?  Starboarding?  Hulling?  Shucking?

Ok… to be fair, I helped to raise some sails, but I didn’t really do a good job of learning boat language. 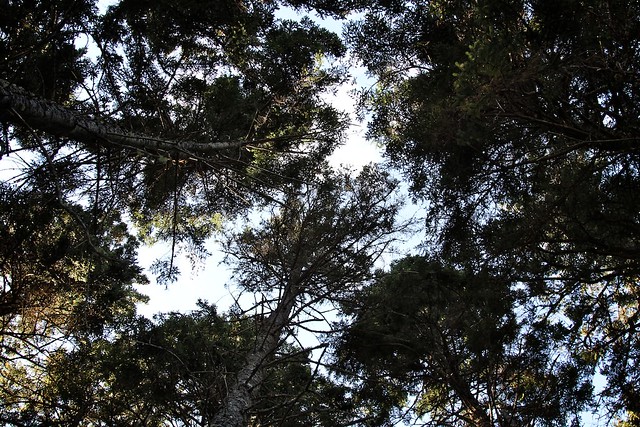 We dropped anchor and explored a few tiny islands.

This is me not at all missing Breaking Bad or The Real Housewives of Awfultown.  This is me just taking it all in. 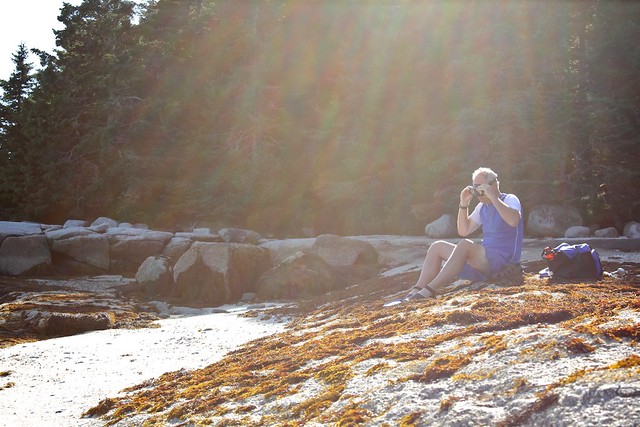 Some of us went for a swim.  When I say ‘us’… I mean that one dude went in the chilly Maine waters to lobster gawk. 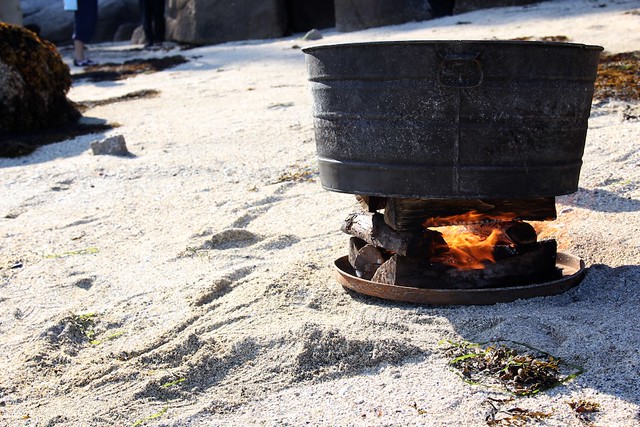 We gathered on tiny Russ Island with one purpose… to put lobsters and corn in a kettle and eat them with too much butter.

This open fire kettle situation is my idea of romance. 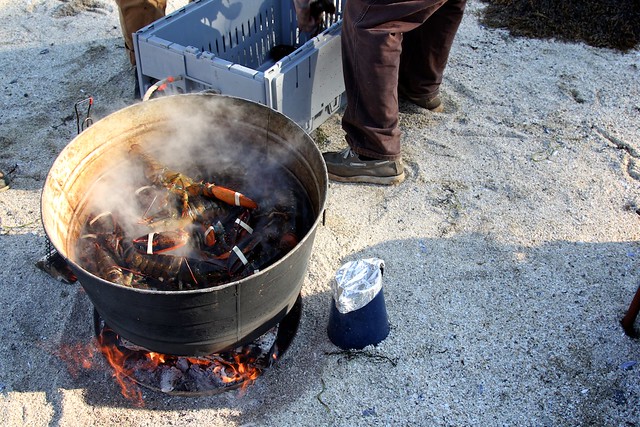 This doesn’t happen in California.

Can I tell you what I learned about these darlings?  In Maine we ate soft-shell lobster.  These are the lobster that molt their hard shells and are in the process of building back their shells when they wander into a lobster trap.  The shells are softer so they don’t really hold up to continental shipping.  They also hold a bit more water than regular lobster… so they’re best eaten standing up, outdoors, with new people that you love. 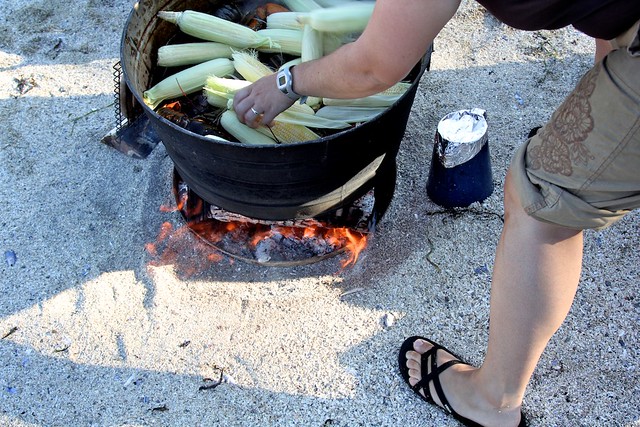 Atop the lobster go the corn.

In the foil covered pitcher?  BUTTER! 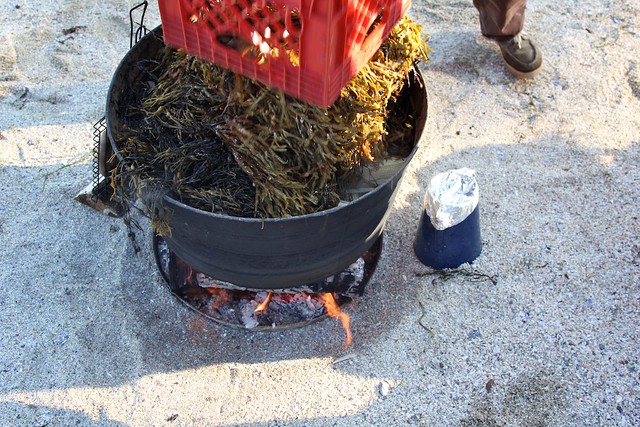 Atop the lobsters, atop the corn, beside the butter… piles of seaweed. 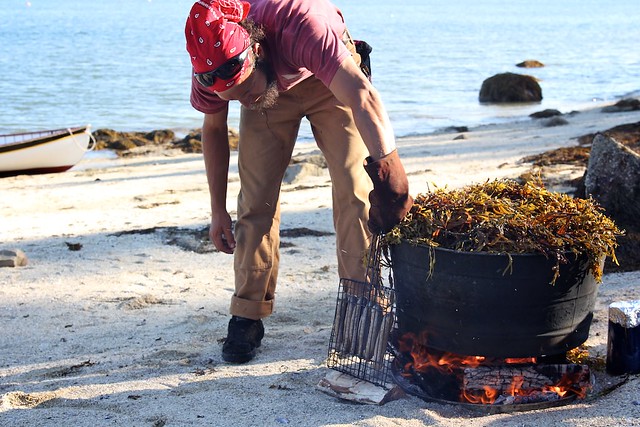 Grill some sausages next to the kettle… like it’s no big deal or whatever.

If we could just figure out how to make a chocolate cake in this kettle at the same time, my dreams would be complete. 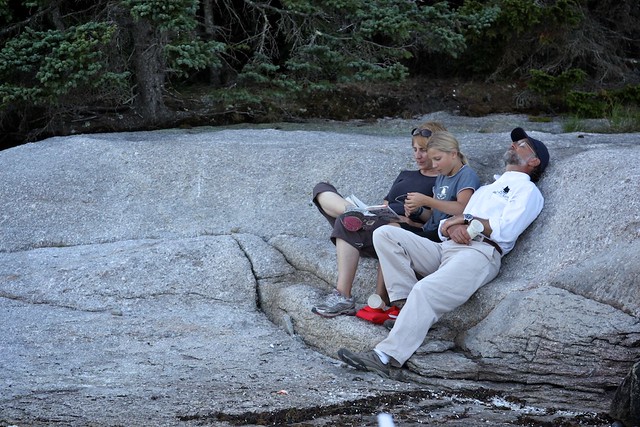 Lobsters take about 30 minutes to bake.  The perfect amount of time for Captain Annie and Captain Jon to read a story with their daughter Ella. 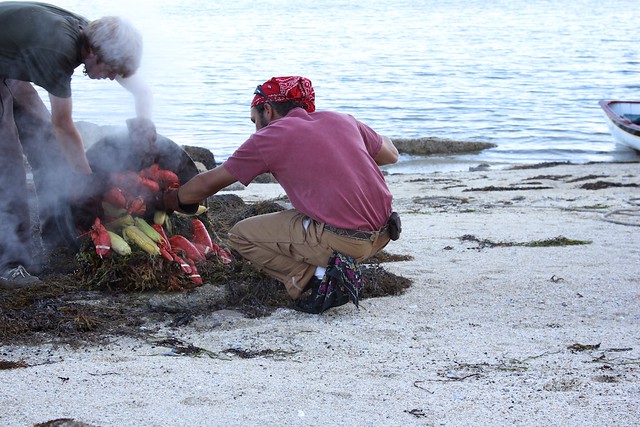 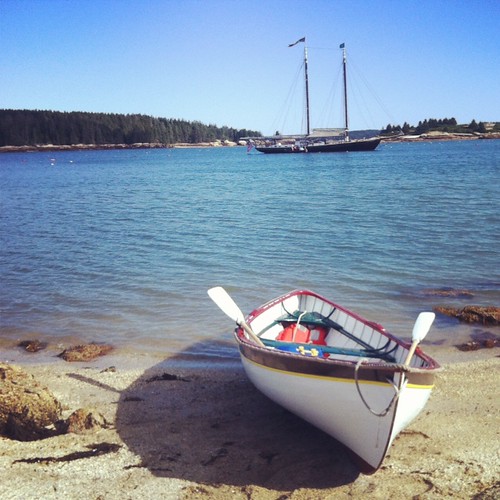 Especially when an island beach lobster bake exists in this reality. 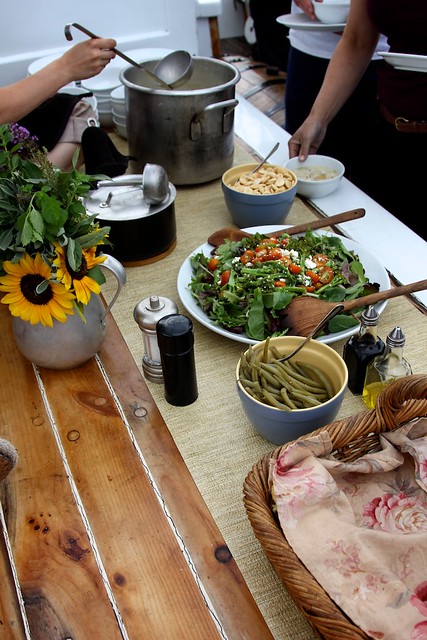 Captain Annie is the chef on the Riggin.  When I say chef… I mean cheffy chef for real.  She’s classically trained and her appreciation for Maine summer produce just shines.  Food is fresh, thoughtful, and actually tastes like the place it comes from.

I’ve been to great restaurants and foodie (I hate that word) cities, but I’ve never had food so naturally considered and humbly appreciated. 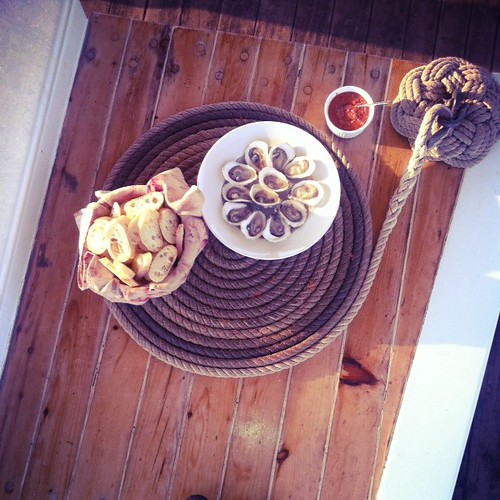 So many blessings abound. 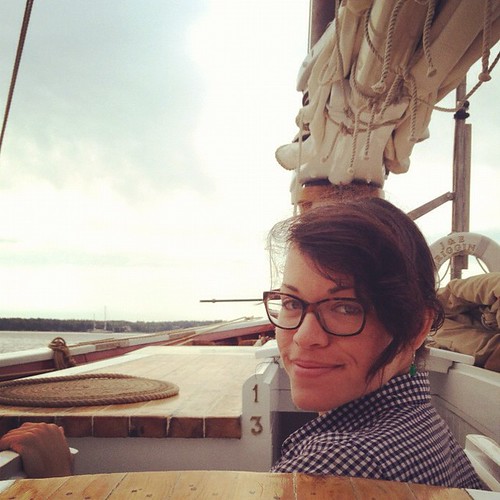 Head on a schooner aka day something-or-other without a shower. 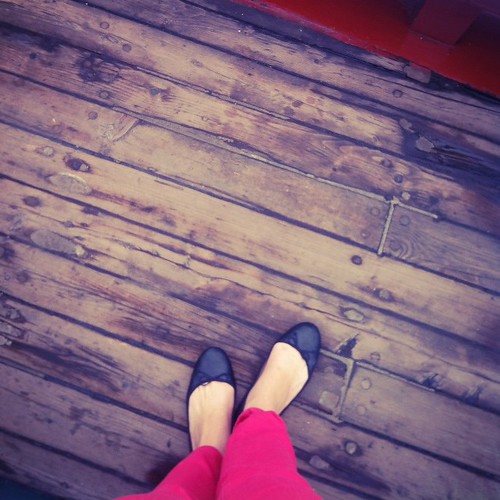 Feet on a schooner.

I just really like thinking about how old this wood is, and the different kinds of people who have trod across it. 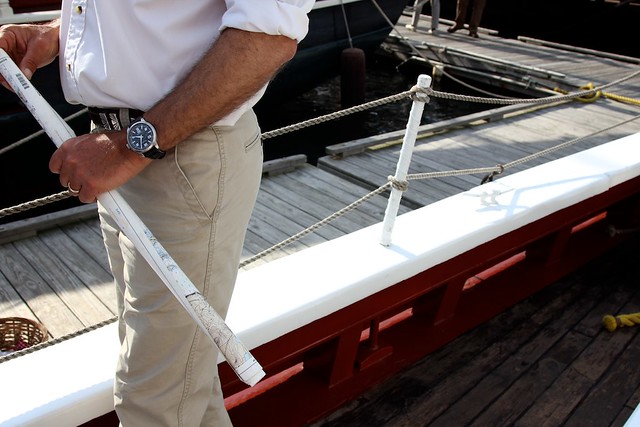 Captain Jon and his maps.

Some vacations just happen to you, but other vacations really fill you up.  My four days on the J & E Riggin with Jon, Annie, their daughter Ella, and the amazingly hardworking crew really blew me away.  It was so special.  It wasn’t about going to the right restaurants, rushing first thing to the best doughnut shop, or finding the best cocktail… it was about being a part of something much bigger and much older than us.  There’s history, respect, reverence, and learning… and we got to take it all in (without instantly tweeting about it).  It’s feels like what it might be like to ride a whale… with new friends and really good food.

Captain Annie along with her kitchen partner / fellow mastermind Toni coaxed some really amazing food out of the tiny galley kitchen.  Her granola was my favorite thing (besides the view) to wake up to every morning.  It was simple, studded with big coconut flakes and had a hint of bourbon vanilla.  I flipped through her cookbook when I returned home to find her recipe. 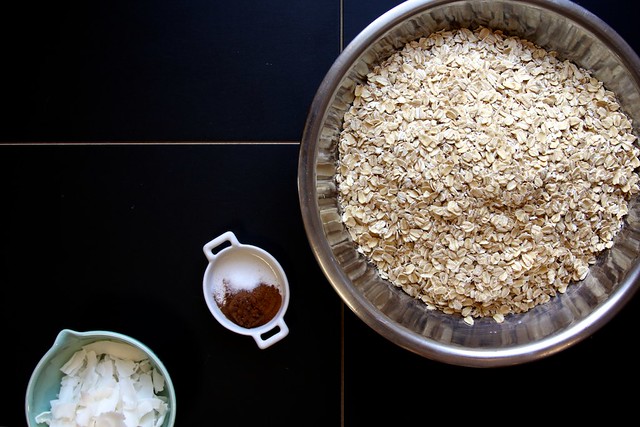 It all starts with oats, ground cinnamon, a big pinch of salt, and unsweetened shredded coconut.

I am addicted to this big flake coconut that I often find at Whole Foods. 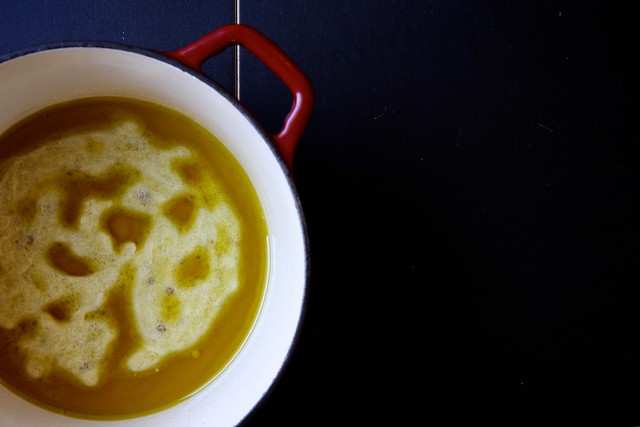 Let the good times roll.  …that was a joke about oats. 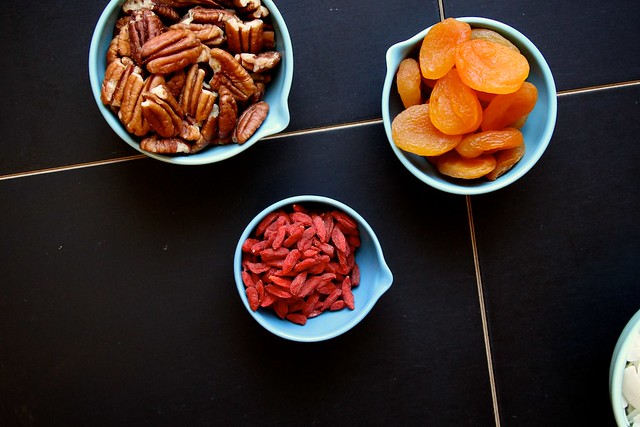 This is the part where things get selfish.  The best part of making your own granola is choosing exactly what makes you happy in it. 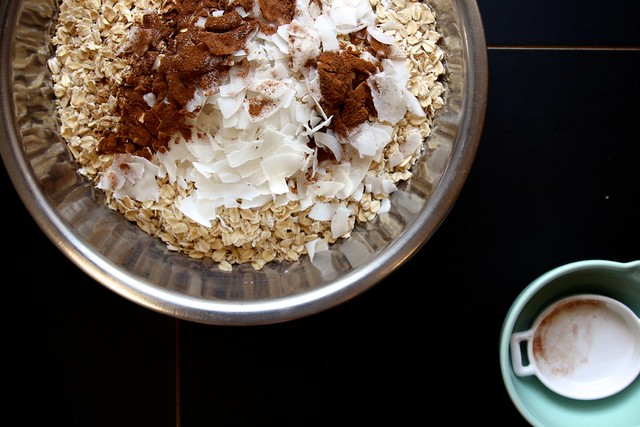 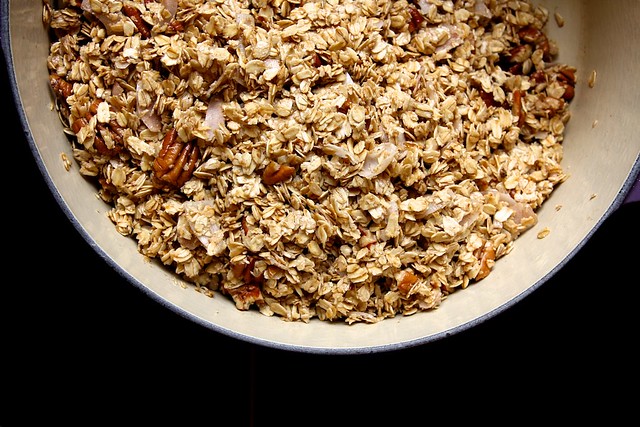 So this weird thing happened in my house.  It’s about me and my mixing bowl situation… namely that I don’t really have one.  My largest mixing bowl is actually my big ol’ soup pot. 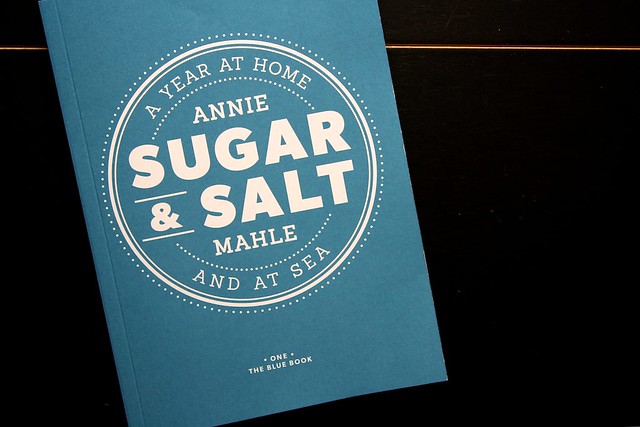 This granola recipe is inspired by Captain Annie’s cookbook Sugar & Salt.  It’s just one of many totally comforting recipes.  Plus, there’s all kinds of information about schooner living, which I’m now totally smitten with. 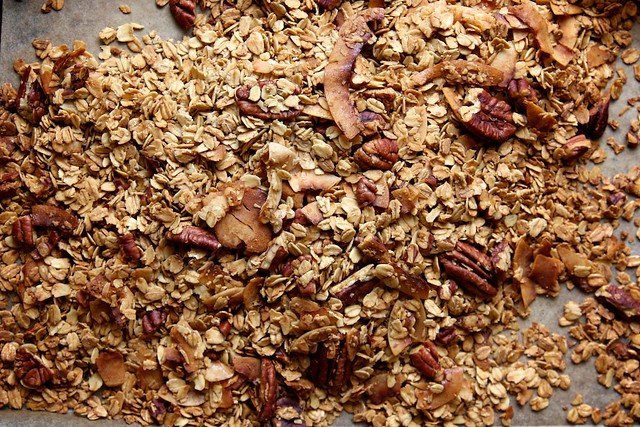 Warm and toasted.  Suited and booted. 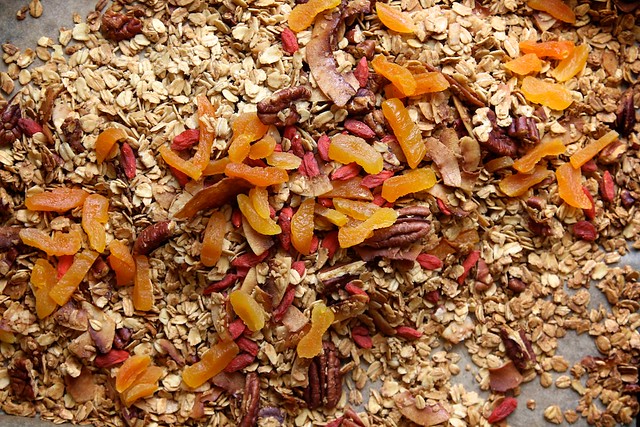 I adapted the granola just a bit by adding maple syrup and dried fruit.  It tastes of comfort and love and is most fitting to gift by the jarful.

adapted from Sugar and Salt

In a large bowl, toss together coconut, pecans, rolled oats, cinnamon, and salt.

In a medium suacepan over low heat, stir together the oil, maple syrup, and honey.  Stir until melted together.  Remove from heat and add vanilla extract.  Stir together.

Add the wet ingredients, all at once, to the rolled oat mixture.  Toss to coat, insuring that all of the dry ingredients are coated in the maple syrup mixture.  Divide the mixture between the two prepared baking pans.  Spread into an even layer.

Bake granola for 45 minutes to 1 hour, removing the pans from the oven twice during baking to toss and stir.  Once mixture is evenly browned and toasted, remove from the oven and allow to cool completely.  Add dried fruit and stire granola in an airtight container at room temperature.

Granola will last for several weeks.

Every cake I pull from the oven, stack and frost,