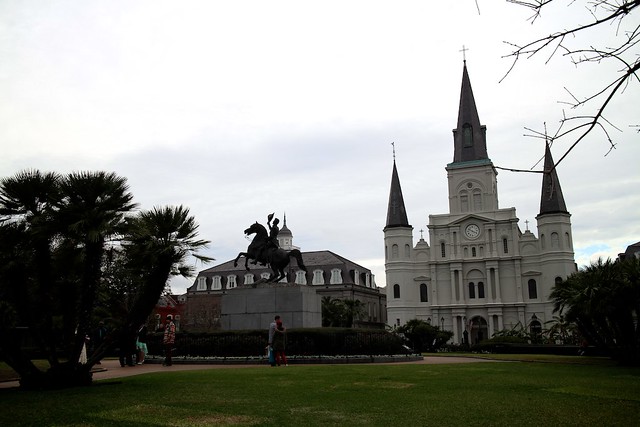 Do people write love songs about New Orleans?  Do they write sonnets?  Hold a boom box over their heads to profess their love to this city?

Or do they just visit and return home full of gumbo, beads, bloody marys, and just a tinge of regret? 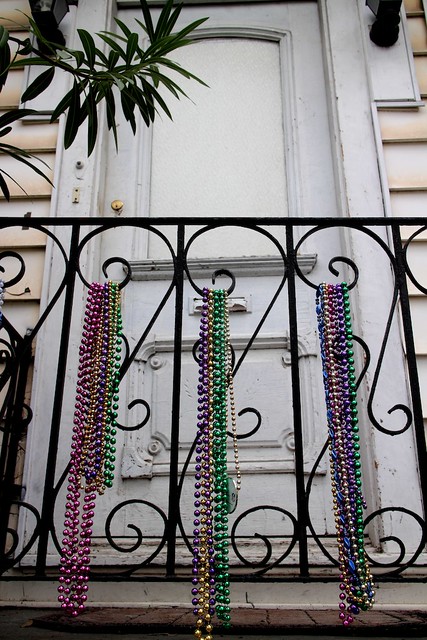 I spend twelve glorious days in New Orleans this Mardi Gras season and I came away feeling different.  There’s something about this city that feels nostalgic.  It goes much deeper than the colorful plastic beads and French Quarter fortune tellers… it’s a feeling that lingers in the air.  It feels like all that once was in this city is still so close.    It’s hard to describe.  Maybe it’s the passing streetcars, the above ground tombs, and the always uneven cobblestone.  Something seeps from the ground here, and it feels old and relevant. 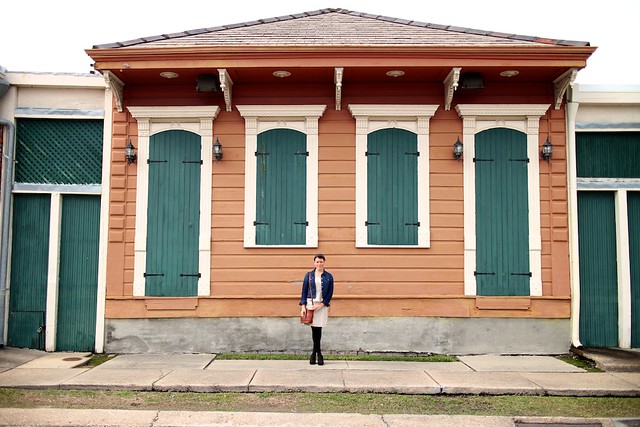 New Orleans is special.  It’s proud.  It’s colorful.  The city  totally wants you to come for a visit, and come back to stay.  What follows are the things I saw and the things I loved.

(If I were actually standing in the middle of the two center windows I’d be a much more successful blogger… I’m cool with imperfection.) 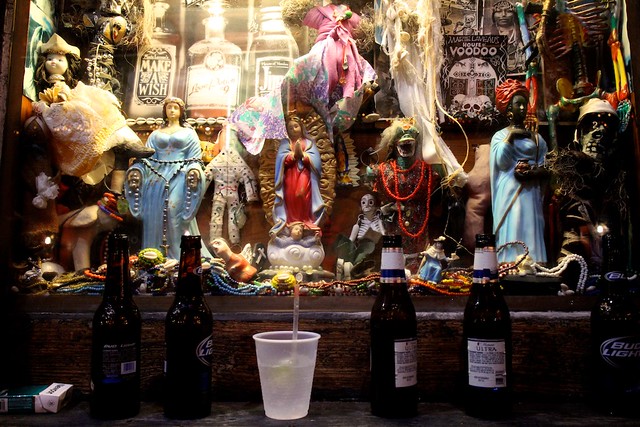 The nights in New Orleans can be positively bonkers.  It’s the intersection of celebration and madness… people just explode into it with tequila shots and music in the streets.  This picture sums up the happenings. 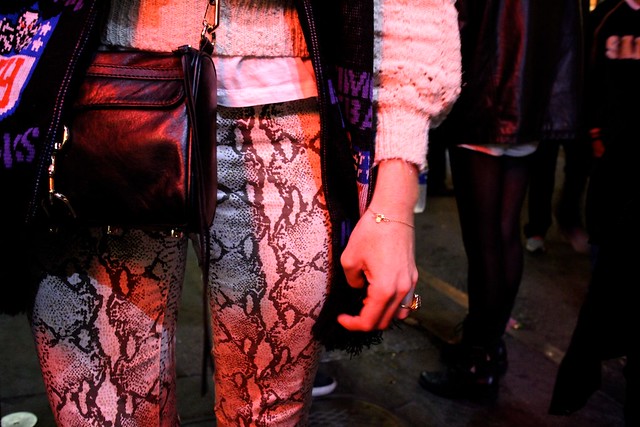 Nightlife pants are a total must in the French Quarter… as are flat, closed-toes shoes, a large bladder, good lipstick, and exposed shoulders if you’re feelin’ it. 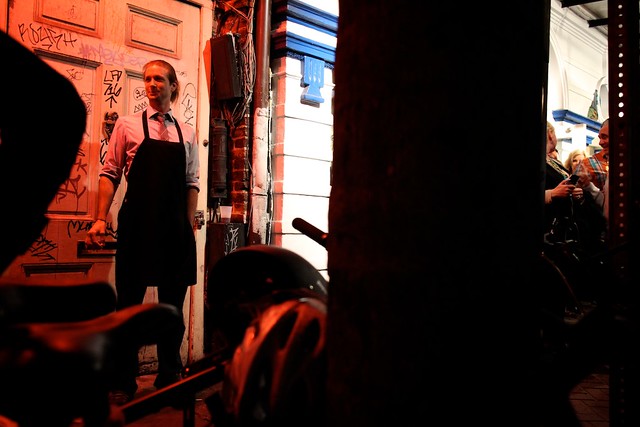 The people watching is everything.  A good bartender in New Orleans is equip with a certain kind of non-judgemental knowing.  I think this dude had it. 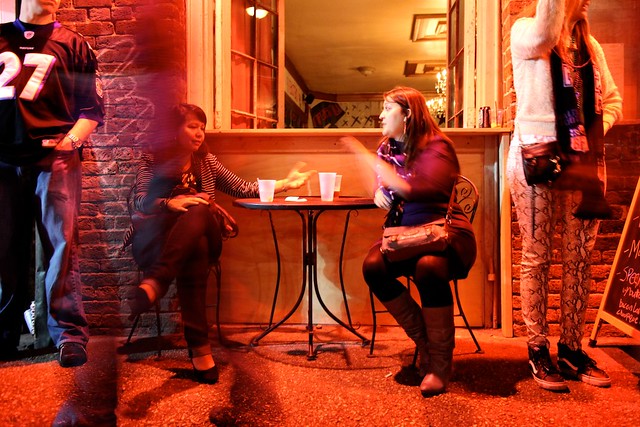 Sometimes it’s really wonderful to step back and just take in the people sipping, chatting, laughing, and passing.

Sometimes people fall on the ground in front of you.  Sometimes you catch a random dude peeing in the street.  Sometimes a dude will run his hand through your hair FOR ABSOLUTELY NO REASON AND IT’S TOTALLY NOT OK.  A lot is possible… so much is possible during New Orleans nights. 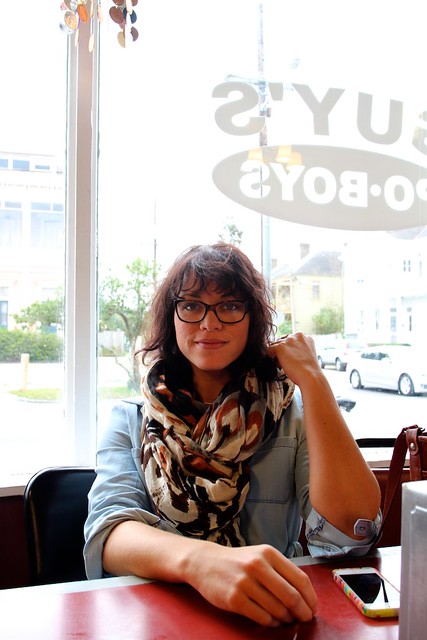 Days are filled with food.

Guy’s Po Boys in Uptown is the kind of place you go for awesome neighborhood sandwiches.  If you go just before they close in the afternoon, you’ll be surrounded by kids in plaid school uniforms ordering sandwiches.  The owner, Marvin seems to know all their names.  There’s something good in that. 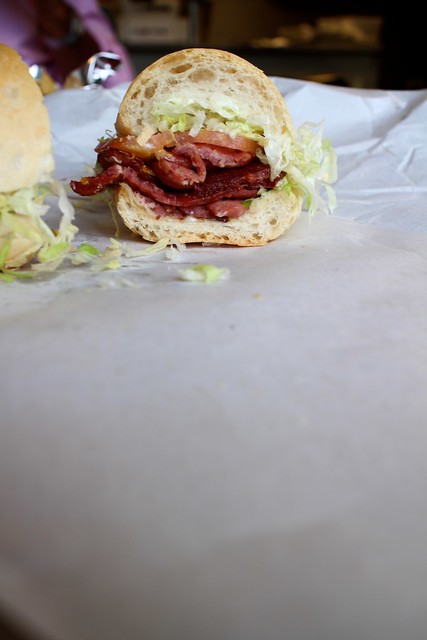 And there’s something totally major in his Smoked Sausage Po Boy.  Dang, dude. 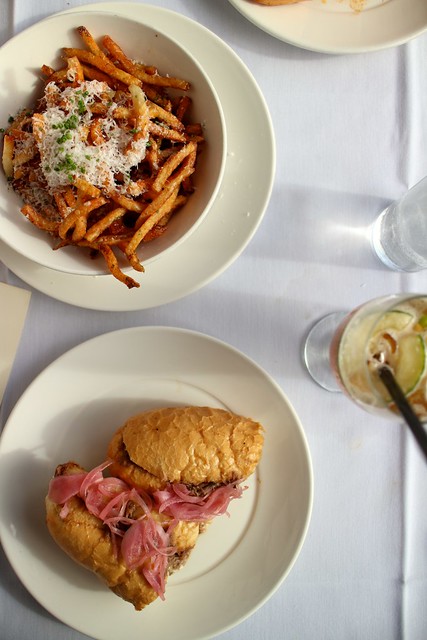 I had one of my favorite meals of the trip at Boucherie.  This little restaurant is so charmed and absolutely delicious!  This brisket po boy with horseradish cream and pickled red onions was gone in approximately 4 minutes.  I’m a lady.

Seriously though… the fries?  OUT OF CONTROL.  And don’t even get me started on the Pimm’s Cup.  I can’t deal. 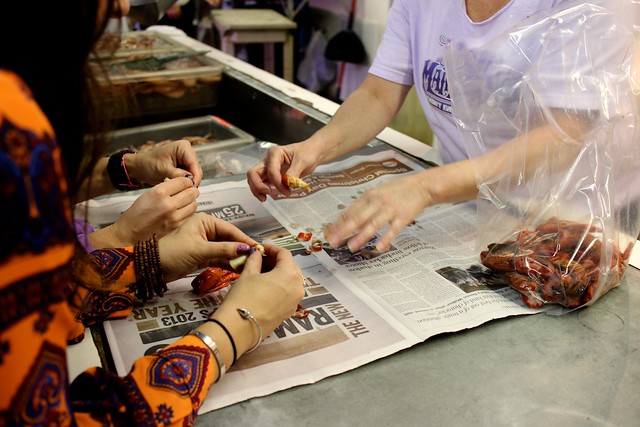 The streets were packed with parades as we tried to make our way to Big Fisherman Seafood for crawfish.  We walked many a block to sneak in before they closed for the night.  We ordered eight pounds of crawfish, and I captured the girls next to us getting a crawfish eating tutorial from the fishwife.

Yea… fishwife is what a female fishmonger is called.  Did you know this?  I totally just learned something. 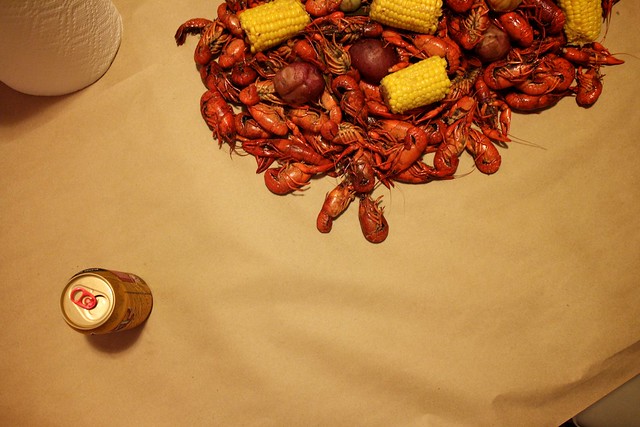 Walking for your crawfish.  Dodging beads and rainstorms.  The work makes the crawfish that much more delicious.  Eating off butcher paper with a cold beer and a giant roll of paper towels also makes for good quality time. 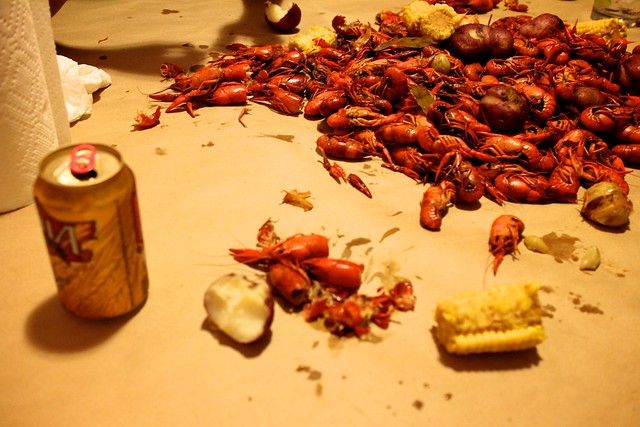 Elbows on the table.  Big easy laughs.  Whole potatoes.  Boiled corn.  Heads of garlic.  This might be as good as it gets.  I mean that most sincerely. 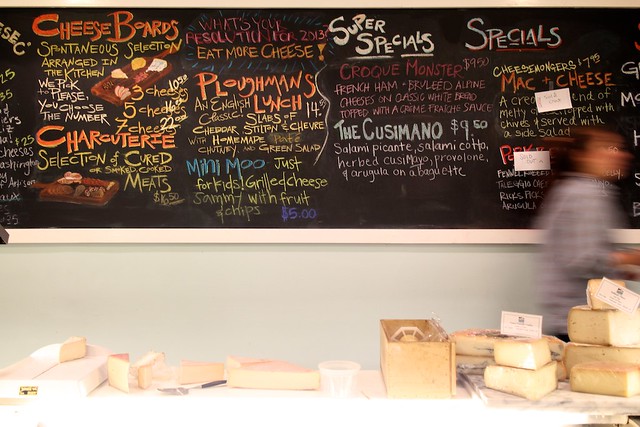 Some nights you just want to stay indoors with wine and illegal amounts of creamy cheese and strong olives.  St. James Cheese Company won’t judge you when you buy too much Brie.  Thank you. 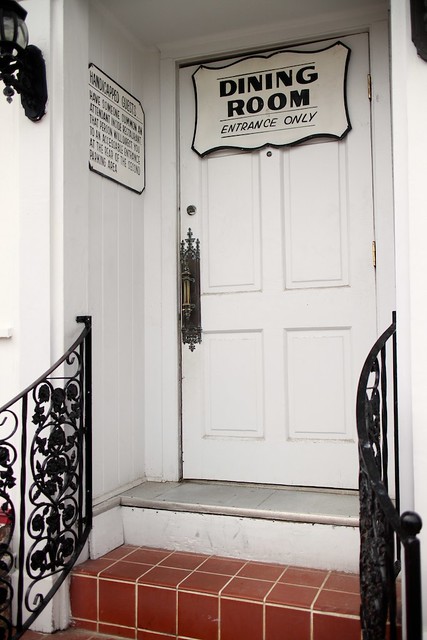 Dooky Chase is a New Orleans classic.  When I say classic I mean that my parents visited New Orleans in 1991 (aka the stone age), lugged their GIANT video camera into the restaurant, and filmed themselves eating the same amazing plate of Red Beans and Rice that I ordered during my visit this month.  My Dad was right… it’s AMAZING! 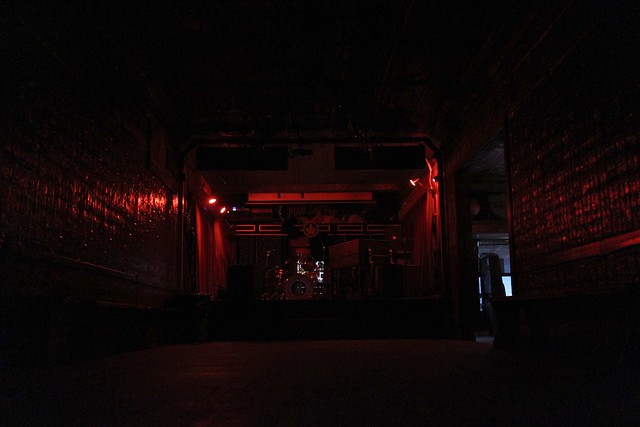 There’s something I noticed about New Orleans… they really have a thing for colored lightbulbs.  Adding a little color to a dark situation can hide a multitude of sins (and possible cockroaches) (I’m sorry… that’s real).  The Maple Leaf Bar is an old-school, bar-smelling bar with amazing and music… 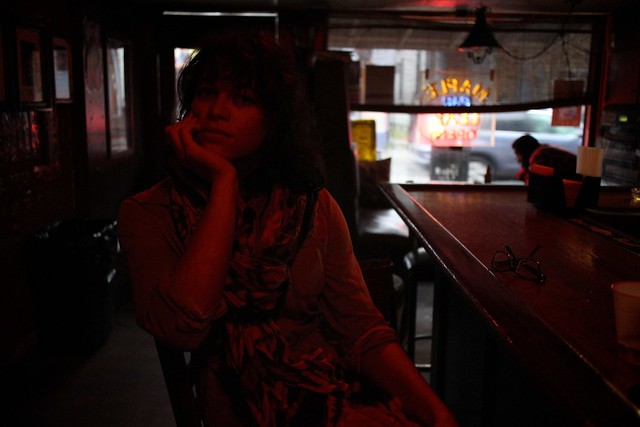 they served bourbon neat, and in disposable plastic cups.

Next door to the Maple Leaf Bar is a restaurant called Jacque Imo’s where I would encourage you to please please please go and order a watermelon mojito and shrimp and alligator sausage cheesecake.  Whoa.  Trust. 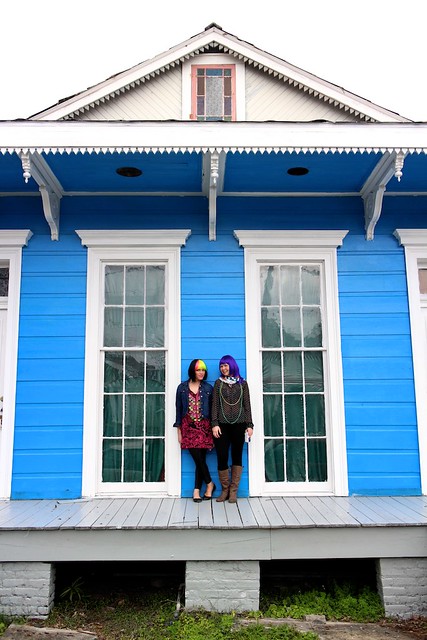 Maybe I’m wearing a Rainbow Bright wig from Fifi Mahoney’s.  That wouldn’t be the worst thing that ever happened. 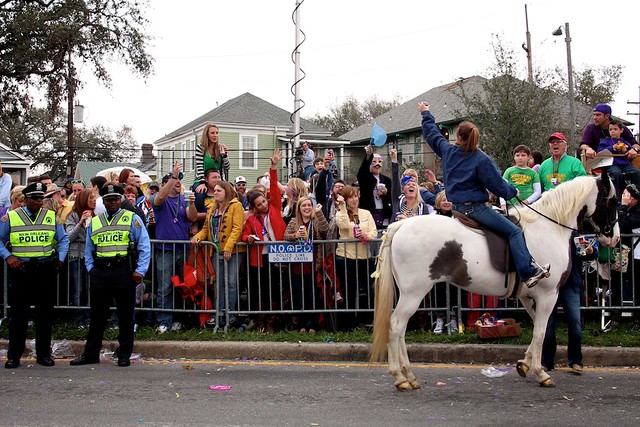 We can’t talk about Mardi Gras without talking about the parades.  I know what you’re thinking… no I did not flash my lady parts to get beads.  A) Most people at  parades don’t actually do that.  B)  Stop letting episodes of Bad Girls Club New Orleans tell you what to think about Mardi Gras.  C) Flying beads are hard enough to catch on their own, I can’t imagine catching them with my top over my head.  D) I’m going to stop talking before this gets any worse.

Suffice it to say that the mood at Mardi Gras parades is very celebratory.  Even the cops are sort of having a good time (on the inside). 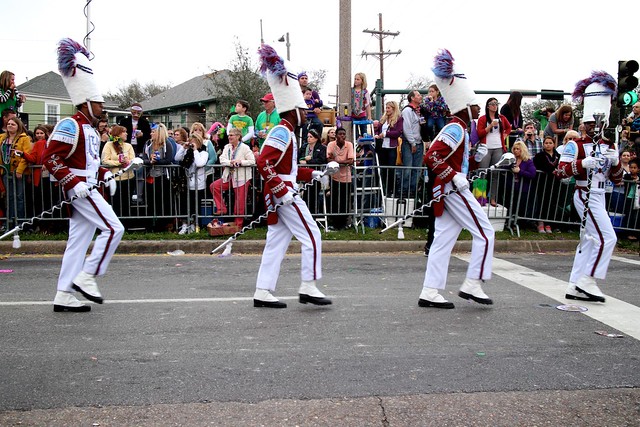 The marching bands are the hardest working parade people.  In many parades these dudes march for 10 miles. 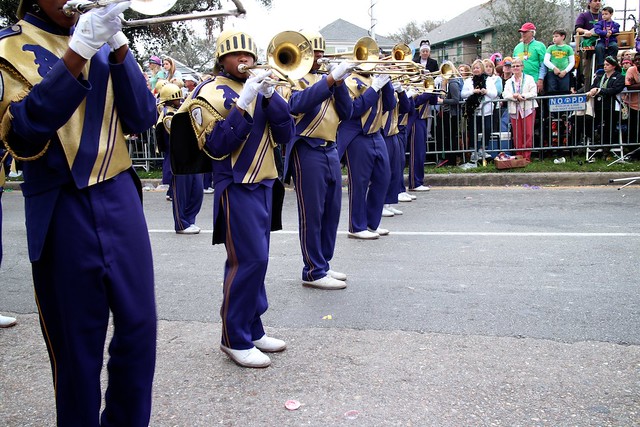 The kids of St. Aug grace almost every big parade.  These dudes WERK!  I love this kid’s half-hidden face. 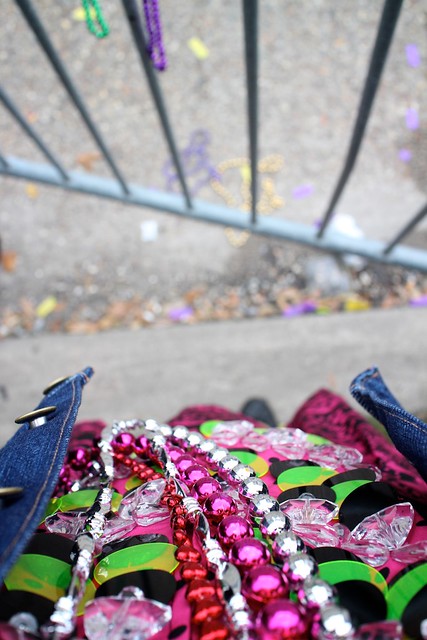 Beads, color, and the discard. 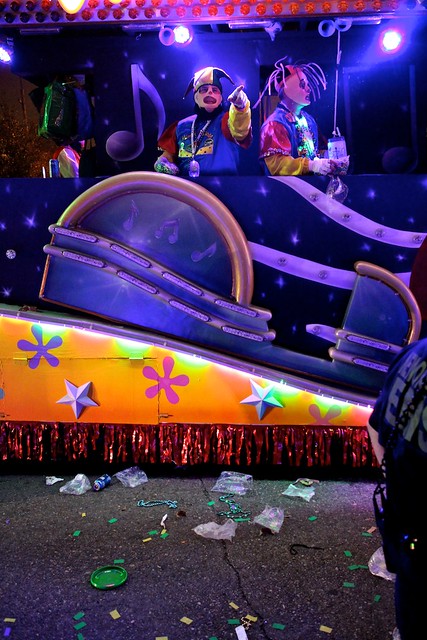 Let’s talk about the gentlemen (using that word loosely) on the parade floats.  After a few hours of being in the front lines of a parade you learn a few things.  These dudes throw beads HARD.  Making eye contact is essential.  Being a cute girl, child on a ladder, or really aggressive dude helps in the acquisition of beads.  Being a good catcher of things: also helpful.  Taking a flying strand of hard plastic to the face HURTS!  At a certain point, the quest for beads turns into a defense of your precious face.  That’s real.

Ps.  Sometimes these dudes look scary, are super drunk, and don’t actually seem that stoked about their bead-throwing lives.  It must be a long ten miles. 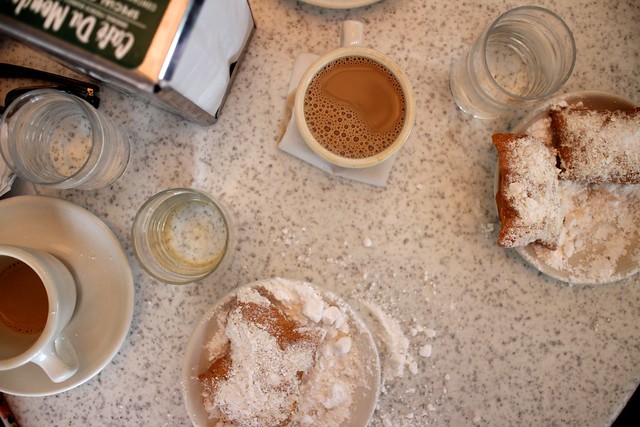 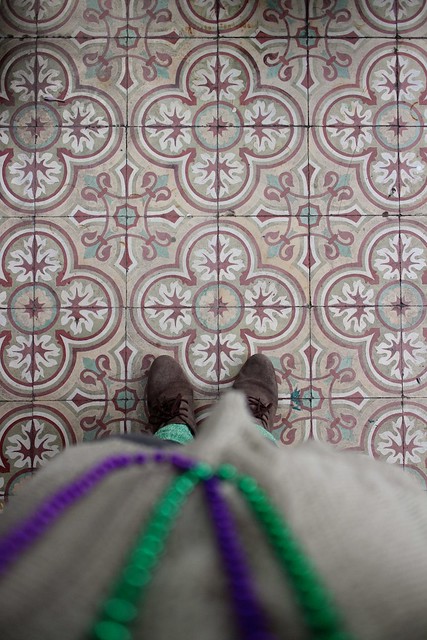 Looking down is ornate. 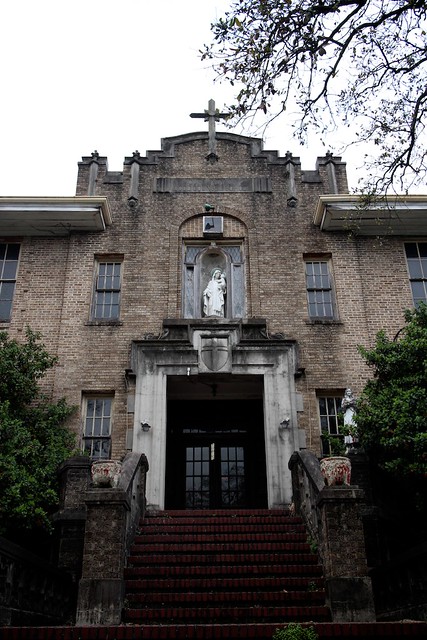 Looking up is pretty serious too. 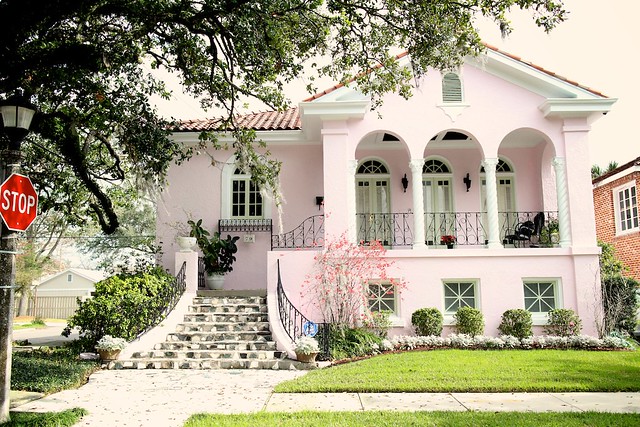 There are such special houses in this city!  This pretty pink dream stood out to me.  Sidenote:  There was a super tall older gentleman washing his tiny, though very barky, dog in the backyard.  I liked that. 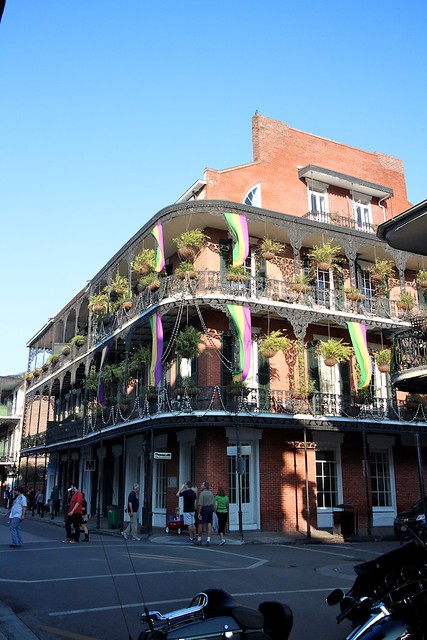 I must have a crush on this building. I took a picture of it the last time I visited New Orleans. 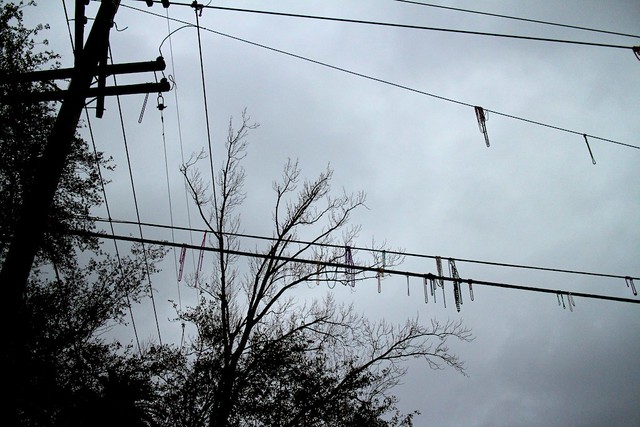 The streets are clean and clear after Mardi Gras.  Some minds look towards the Lent season.  Tourists find their way home.  Locals get back to work.  Beads hang and remain.

I love it all.

(All shots in this post taken with my new Canon EOSm that I’ll tell you more about soon.  Shots of Joy and Maple Leaf Bar taken by HC.) (That is all.)