We’re staring down the weekend and, for us lucky ones, it’s shaping up to be one of those perfect fall weekends. It’s that kind of early fall when you appreciate the perfection of cooler temperatures, the leaves are changing, and everyone you know is off apple picking.  I mean… that’s the most idealized version of our current reality but let’s hold on to pieces of it for our sanity.

This weekend I want to get us from wakefulness to pancake in the shortest time possible… without having to put on a mask. With that in mind, we’re going to whip up a loose Dutch Baby pancake batter and pour it into a skillet with almost too much melted butter.  It will crisp and puff and pancake itself in the privacy of our ovens after which we’ll rain down chocolate chip cookie flavor and pat ourself on the back for a job well done in pajamas.

That’s my plan for us. It’s ambitious but I think we have it in us. Here’s what you’ll need to get this giant pancake in your life:

•  eggs – 4 precisely.  This will add the oomph and voila to the pancake just as it comes out of the oven.  Eggs will also create a rich flavor and texture which is the hallmark of this sort of pancake and a testament to the magic of eggs.

•  brown sugar – a bit to sweeten the batter and more than a bit to sprinkle atop the baked pancake as a quickie cookie-like substitute for maple syrup.

•  milk – I used whole milk though you could use any fat more or less.  Full-fat oat milk is also a lovely substitute though any non-dairy milk will do if that’s what you’re into.

•  flour, cinnamon, salt, and a teeny tiny bit of baking soda. The flour will help add structure to the pancake and give it some stretch.  Traditionally a Dutch Baby is only leavened by eggs but we’ll add just a bit of baking soda to help make the flavor more reminiscent of chocolate chip cookies. 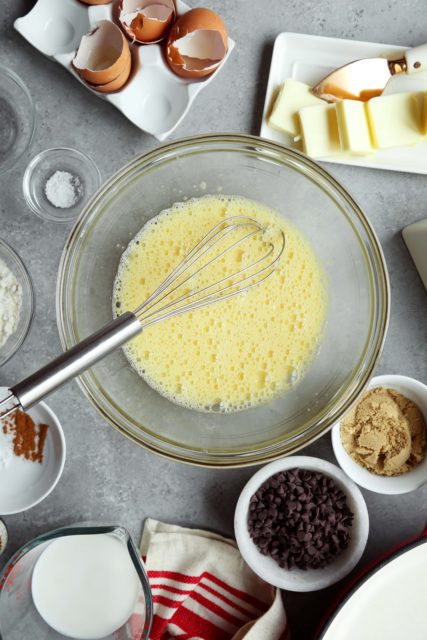 This goes like you might expect. Whisk together the eggs, sugar, and salt until well combined and a little bit frothy.

The eggs do all of the lifting in this recipe and you want to make sure they’re well aerated by whisking them really very well. Next, we’ll whisk in the dry ingredients. Whisk in flour, a tiny bit of baking soda, salt, and cinnamon until no lumps remain. If you’re feeling like the batter is super thin and you’re second guessing yourself – you’re doing it right. This is a loose batter that will crisp around the edges and puff in the center. Being a loosey goosey batter is part of the deal. Things to look for in the pan you’re using:

• it’s 12-inches wide. A smaller pan or larger pan will throw off the ability to puff and the cook time.

• it’s nonstick (that’s a bonus) – if you’re using unenameled cast iron that will be fine too.

Melt plenty of butter in the pan. We don’t have any butter fat in the pancake itself so don’t be shy about the 3 tablespoons melted into the pan. Next in the hot pan, all of the batter in one fell swoop.

Bake. No peeking until the end. While the pancake bakes mix together a casual bowl of brown sugar, mini chocolate chips, and salt.  We’re making a pancake that taste like a cookie from the outside in! Here’s the thing, if you want oooohhs and aaaahhhs at the puff of your pancake, have everyone gather around the oven as you pull it out.  The pancake deflates pretty quickly.  While the pancake is still piping hot, add a pat of butter and your chocolate and sugar sprinkles.  Let the butter melt.  Let the sugar and chocolate melt.  Pour the coffee. Now, you can slice this into pieces and plate it like a civilized person or you can stand around the counter and carefully tear pieces from the hot pan. It’s up to you. It’s your weekend and I want you to live your best.

Photos with my friend Jon Melendez who has loads of incredible recipes on his own site The Candid Appetite.

The best and easiest way to make weekend pancakes!

END_OF_DOCUMENT_TOKEN_TO_BE_REPLACED