Micro batch baking – the invitation is to get all the way into it with me!  This is all very Kristin Wiig  making herself a single, sad cupcake in the movie Bridesmaids, save for the fact that there is absolutely zero sadness in me eating a single cinnamon roll over the kitchen sink in my pajamas.  This is, in fact, what I call luxury.  This single-serve cinnamon roll deserves a proper home and printable recipe here on the blog before I decide if this whole series is an ebook or a zine something – this really is something (and a proper cookbook would take too long).

This singular cinnamon roll (which can, of course be doubled for two people or just because) is gooey and best enjoyed warm with cream cheese glaze dripping down your hands. You can absolutely use a fork if you need to keep up appearances, but really what fun is that? •  whole milk or any milk you prefer

•  butter, either softened or melted butter

* you could make this recipe vegan by substituting an alternative milk for the dough, vegan butter spread for the filling, and an easy powdered sugar glaze for the topping. In a small bowl, whisk together the dry ingredients:  flour, granulated sugar, baking powder, instant yeast (like RapidRise), and salt.

In the microwave, warm milk and oil until just warm to the touch.  It’s ok if the two don’t mix well together, it’ll come together with the dough. Turn the dough onto a lightly floured counter and knead for 25 turns or so.  You’ll feel the gluten start to form as the dough springs back from the pressure of kneading.  Drape a clean kitchen towel over the bouncy dough and allow to rest for 10 minutes. 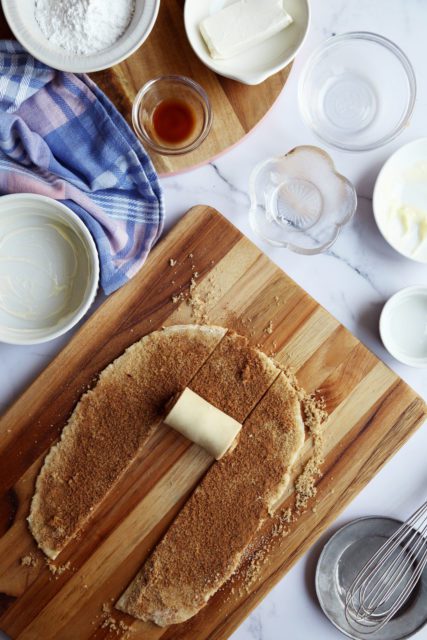 Roll the dough into a thin rectangle about 9×6-inches long.  I found it easiest to roll the dough on a very lightly floured surface so the dough can stick a bit to the surface.  A little bit of traction is helpful since the dough doesn’t have a ton of time to rest and relax.

Spread dough with softened butter and sprinkle with brown sugar and ground cinnamon.

To create an abundant roll, from the 6-inch side of the dough, cut three long strips.  Roll one strip into a coil.  Place that coil on the second strip and continue to roll the coil. Continue with the last strip of dough to create a generous roll. Place the roll in an oven-safe ramekin or dish coated with cooking spray or greased with butter.

Pictured above is a 1-cup ramekin. I like for the roll to bake in something cozy so it maintains its coil shape.

Cover the ramekin loosely with a kitchen towel and allow to rest and rise for 30 minutes while the oven preheats.  I leave the covered ramekin in the warmest spot in my kitchen for this short rise – right near the back burner outside the warming oven. Bake in the upper third of the oven until just golden around the edges and bubbling from the center.

While the roll bakes I make a quick cream cheese glaze, though you could always just make a simple milk and powdered sugar glaze if you don’t have cream cheese on hand. Remove the roll from the ramekin and coat generously with cream cheese frosting. Now, there’s no time to wait – this is a sweet treat for right now.

If rolls are your jam, here’s more!

A recipe for one very delicious, doughy cinnamon roll for one.  You can absolutely double the recipe and make two fine rolls.

END_OF_DOCUMENT_TOKEN_TO_BE_REPLACED