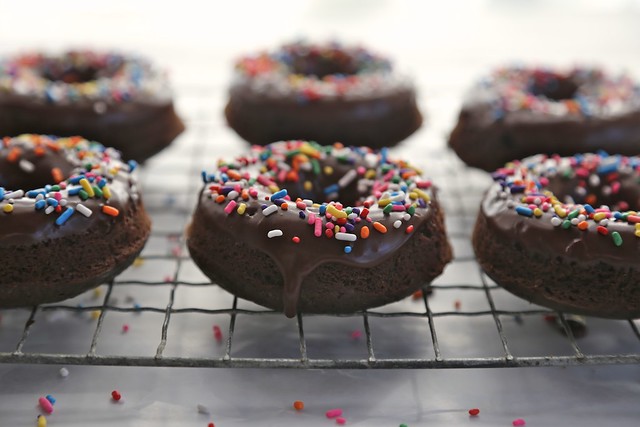 Perfectly cakey and soft with extra drippy chocolate glaze.  Basically, I’ll never make a cupcake again, especially since this is the very best way to eat chocolate cake for breakfast.

Sprinkles, too!  This is a total no-brainer. 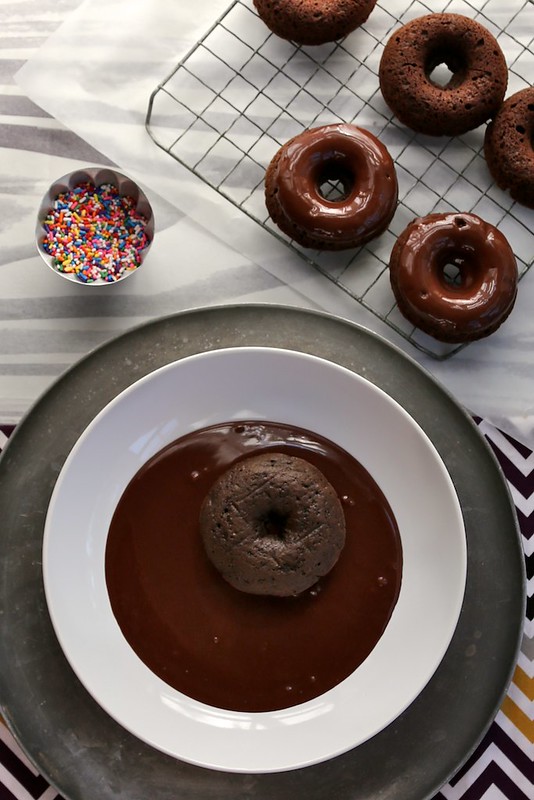 You should get a baked doughnut pan.  No pressure. 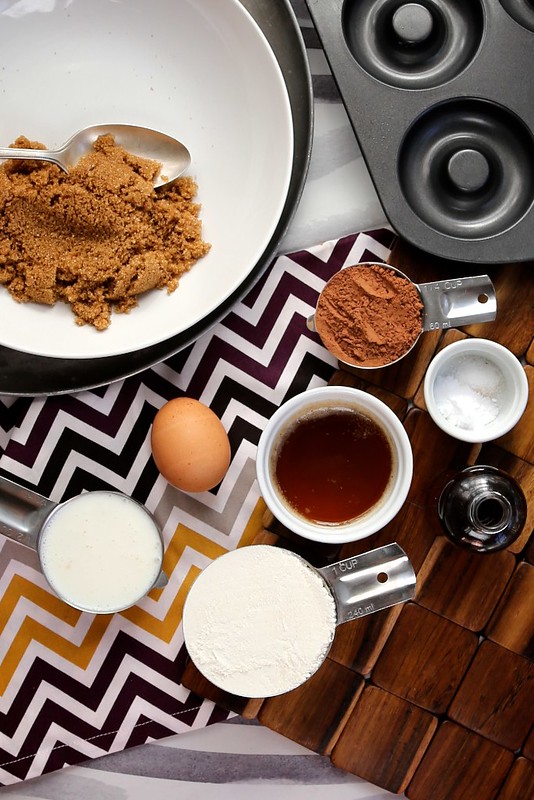 Pulling together the ingredients for baked doughnuts feels like taking it easy.

Just melted butter and buttermilk with a bit of flour and cocoa powder. 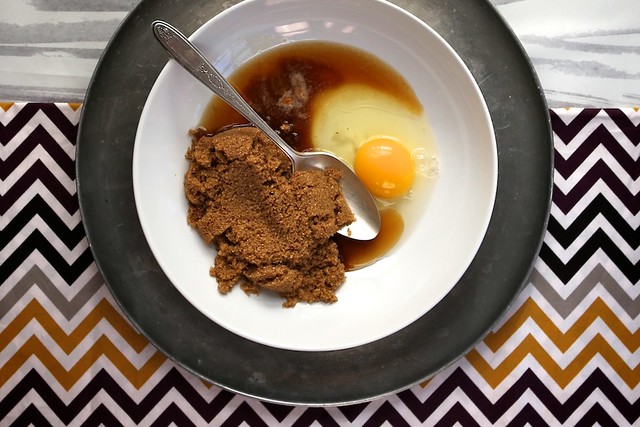 We use brown sugar as the sweetener for these doughnuts.  I like the extra depth that the molasses adds to the chocolate.

Should you be fresh out of brown sugar, I’ve totally got you covered:  How To Make Brown Sugar.

Melted and browned butter is whisked together with an egg, vanilla extract, and brown sugar.  Simple! 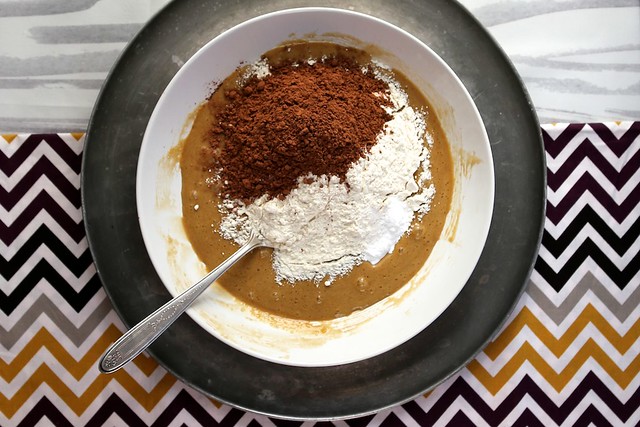 In with the flour, cocoa powder, baking soda, and salt.  No pomp or circumstance…. just in with it! 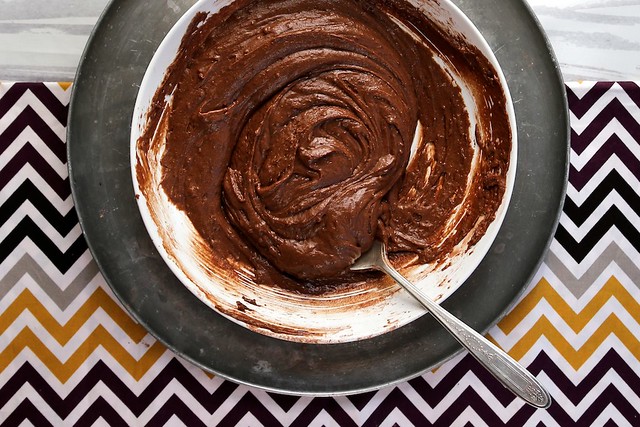 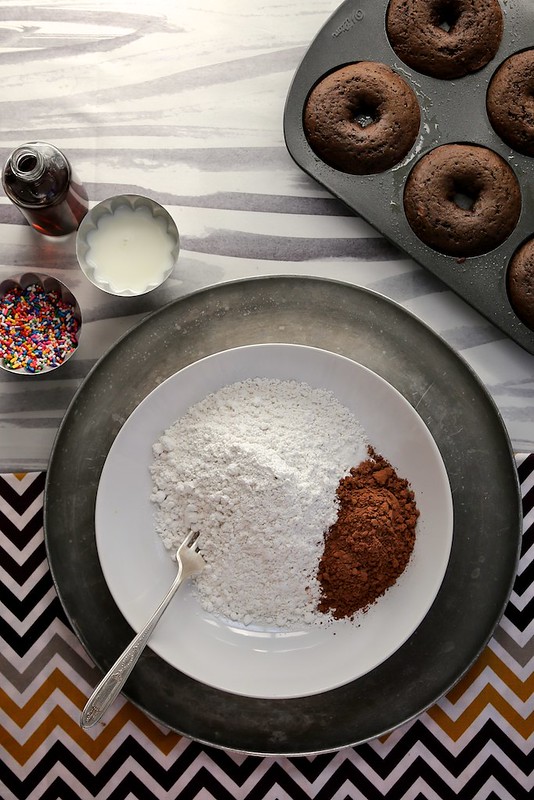 The doughnut molds are filled two-thirds with batter and baked up until soft and tender.  While the doughnuts cool, I made the glaze. 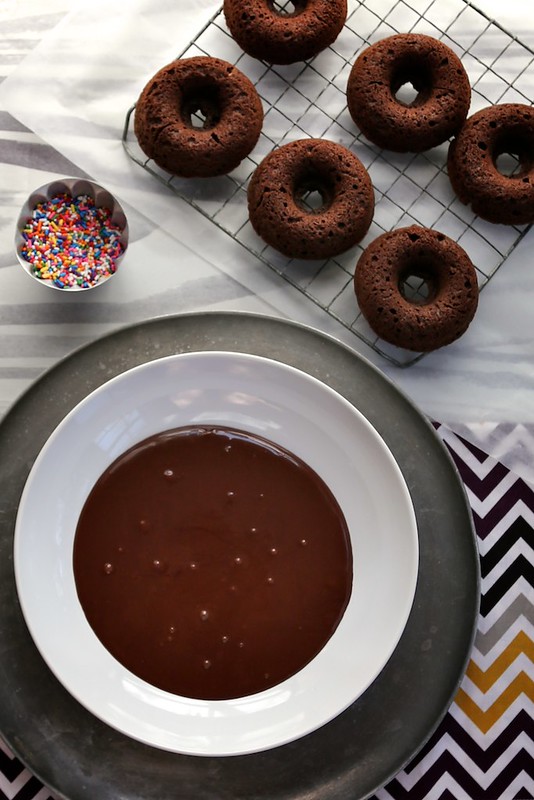 The chocolate glaze is glossy and juuuust pourable.

Consider it chocolate glue for the sprinkles.  That’s about right.

I like to dip the bottom side of the doughnut.  It makes for a more picture-perfect situation.  Really though… any which way works. 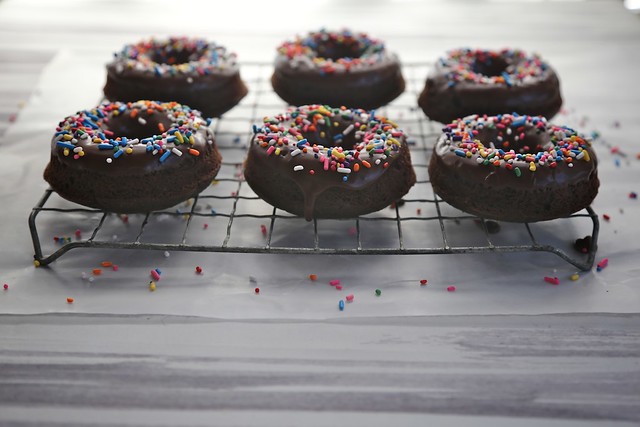 Double dark chocolate! The cake doughnuts aren’t overly sweet, and the glaze adds that shot of doughnut sweetness.  As with most things, I really love these doughnuts served with milky coffee.  Two doughnuts.  Two cups of coffee.  Go on with your bad self.

You might consider sharing these doughnuts!  They’ll make you (even more) popular.  Chocolate and sprinkles… I promise.

For the Chocolate Glaze:

Place a rack in the upper third of the oven and preheat oven to 325  degrees F.  Spray a doughnut baking pan with nonstick cooking spray and set aside.

In a small bowl, whisk together buttermilk, egg, melted butter, and vanilla extract until thoroughly combined.

Pour the wet ingredients into the dry ingredients and fold together until all of the ingredients are well combined.  Scrape the bottom of the bowl to ensure that you’re not leaving any flour behind.  Use a small spoon to portion batter into the prepared doughnut baking pan.  Each doughnut mold should be about two-thirds full.  Bake doughnuts for 11 to 13 minutes or until a skewer inserted into one of the doughnuts comes out clean.  Remove from the oven.  Allow to rest for five minutes before inverting doughnuts onto a wire rack to cool completely.  Allow doughnuts to cool completely before glazing.

Repeat the baking process until all of the batter is turned into doughnuts.

To make the glaze, in a medium bowl whisk together powdered sugar, cocoa powder, and salt.  Add 2 tablespoons of milk and all of the vanilla extract.  Whisk to combine.  Mixture may be thick.  Add milk, a tablespoon at a time, until the glaze is thick but still pourable.

Dip each doughnut (I dipped the bottom side) into the chocolate glaze.  Shake off some of the excess glaze.  Return to the wire rack and sprinkle with color jimmies.   Allow to rest a few moments for the frosting to harden slightly.  These doughnuts are best served within two days of baking.

END_OF_DOCUMENT_TOKEN_TO_BE_REPLACED