I’ve come to infiltrate your weekend.

You may have had plans to sit on the couch, go to the beach, do some sort of house work, eat a hot dog… NO!   Scratch all of that.  Forget it.  No good.  There are cinnamon rolls in the mix!

Seriously… can I elbow my way into your free time?  Can I persuade you with doughy rolls, cinnamon and almond crumbles, and fresh peach filling?  Let the answer be YES because we’re about to smash-bang peach cobbler and cinnamon rolls.  Let’s be geniuses!  Loose interpretation of the word ‘genius’… 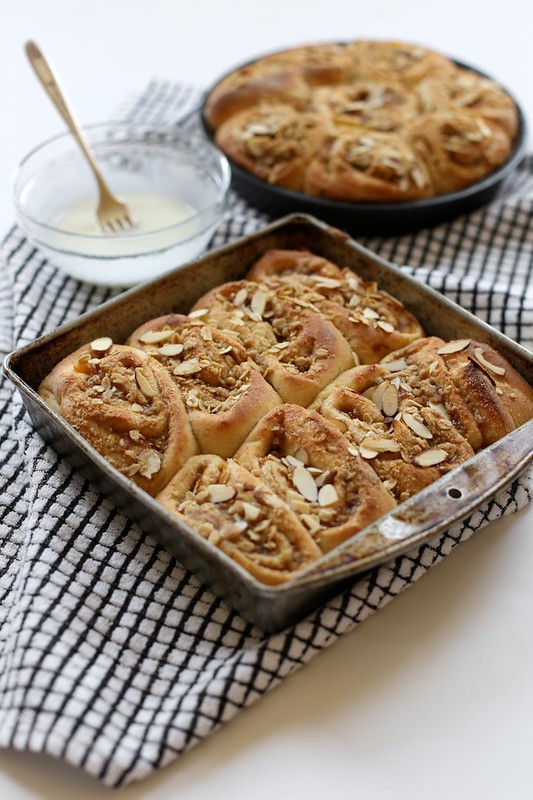 Here’s how this madness goes:  yeasted dough is topped with melted butter, oat crumble, and warm peach filling. Cobbler all up in a doughy roll,  topped with more almond crumble! 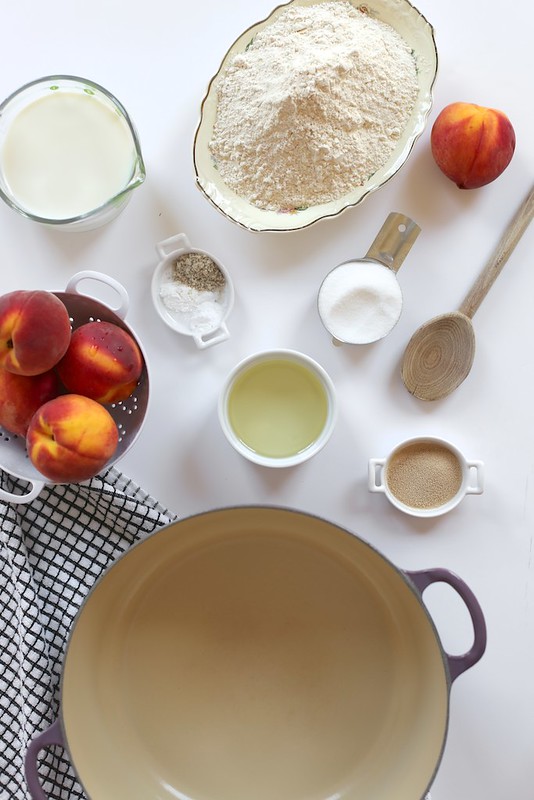 This recipe is adapted from The Pioneer Woman’s famous (infamous?) cinnamon roll.  I’ve experimented with her recipe before.  Remember the Pistachio, Orange and Dark Chocolate Cinnamon Rolls?  I like to think of those as our Winter Cinnamon Rolls, this peach madness is our Summer Roll.  Of course every good baker has their Summer Cinnamon Roll, right? 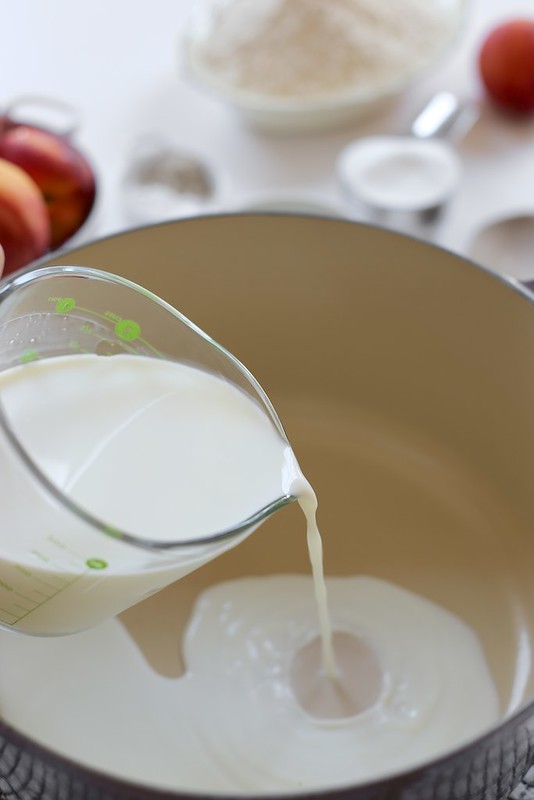 These cinnamon rolls begin with the yeasted dough.

The dough is actually a no (or barely) knead dough that comes together in a big ol’ Dutch oven.  If you don’t have a Dutch oven, a big pot will do.  Any pot.  Make it big.

In with the milk. 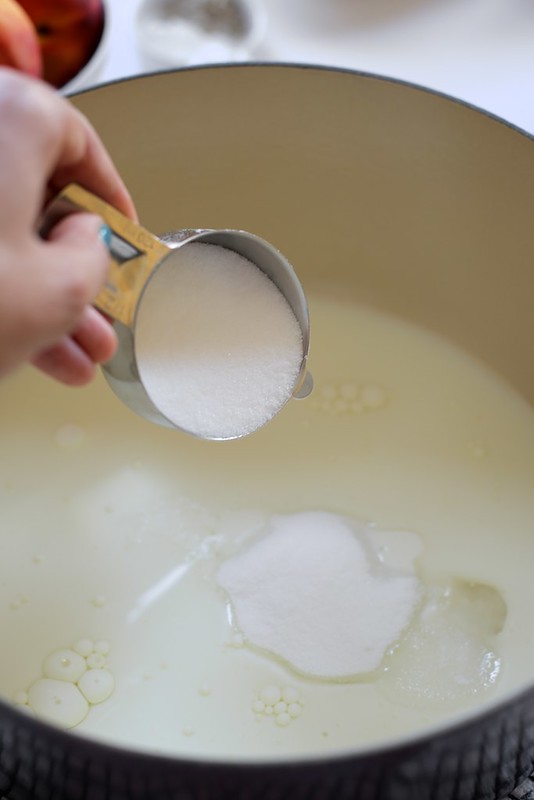 In with the oil (I used melted coconut oil) and the sugar.

The three ingredients are stirred over medium heat until the granulated sugar is juuust dissolved.

The liquid mixture is warmed and the yeast and flour are added. 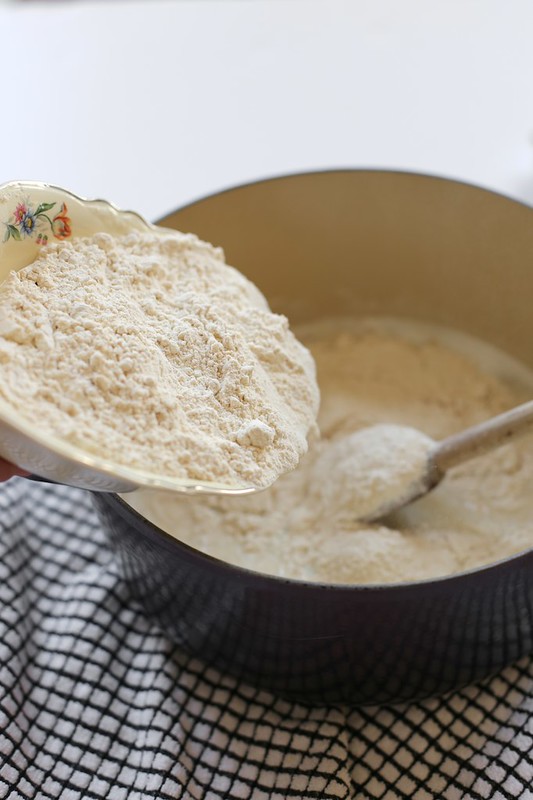 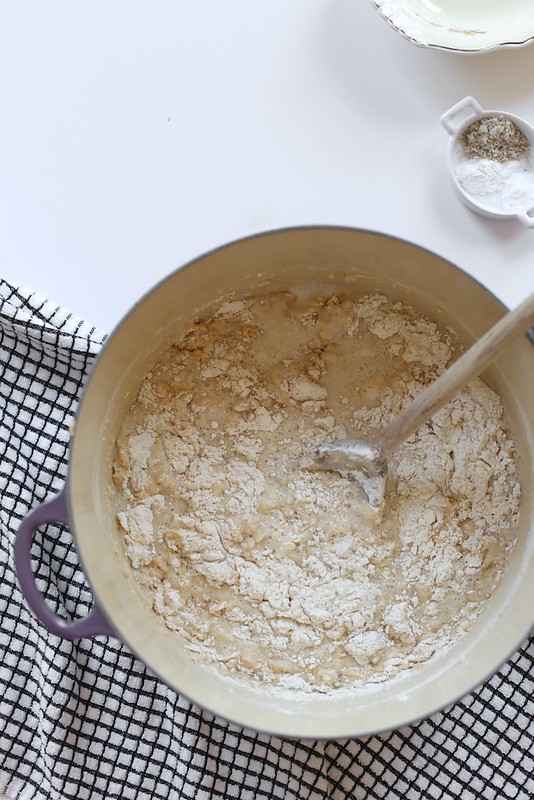 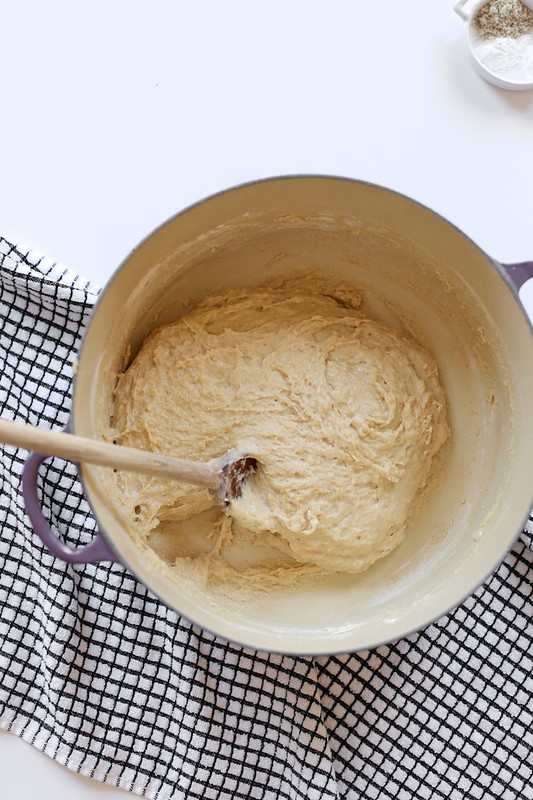 The roll dough is pretty wet.  Like… too wet.  It made me a little nervous.

I remembered that Ree’s cinnamon roll dough was wet too.  Trust the process.  Trusting.

On with the pot lid and the dough is tucked away to rise for an hour. 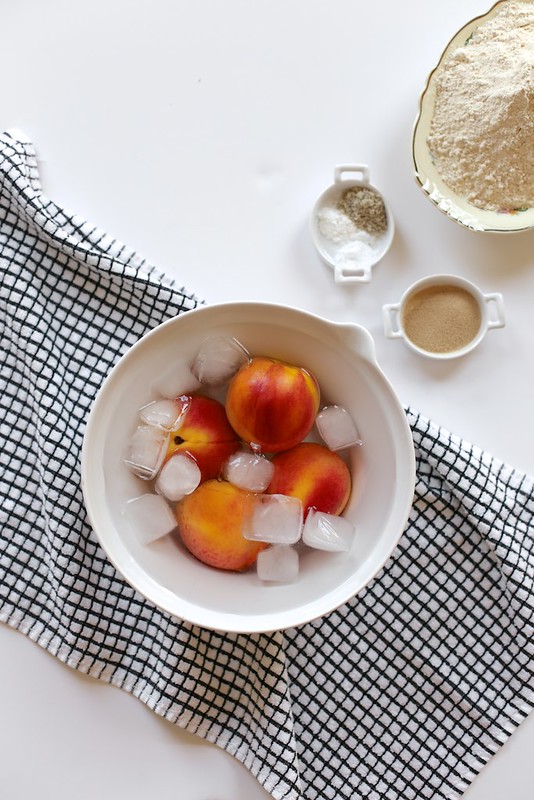 While the dough rises we prep the peach filling and almond crumble.

Yea… there’s a lot going on.  It’s soooo worth it.

I peeled my fresh peaches because I didn’t want to fight with the peel while enjoying these rolls.  You don’t have to peel the peaches.  It’s up to you!

To easily peel peaches you’ll boil them for just a bit, then flash em with cold water: Here’s How!

Alternately you can use frozen and thawed peaches.  Choose your own adventure. 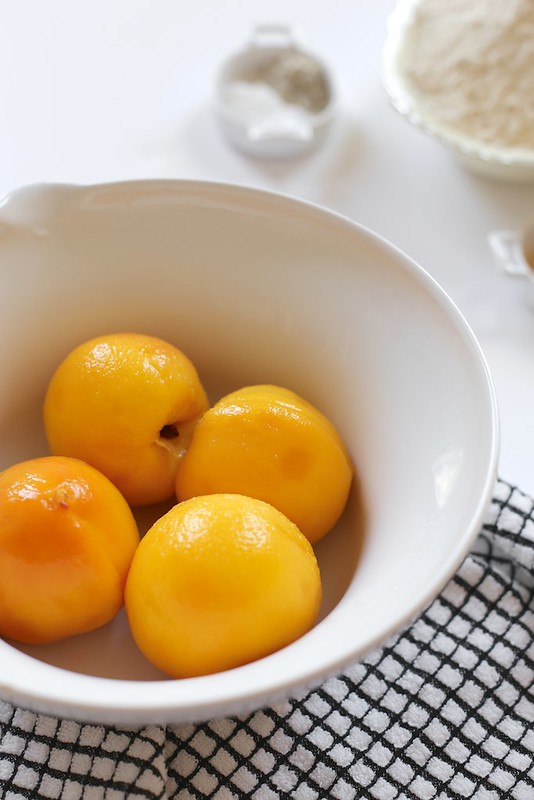 Peaches peeled AND SO SLIPPERY. 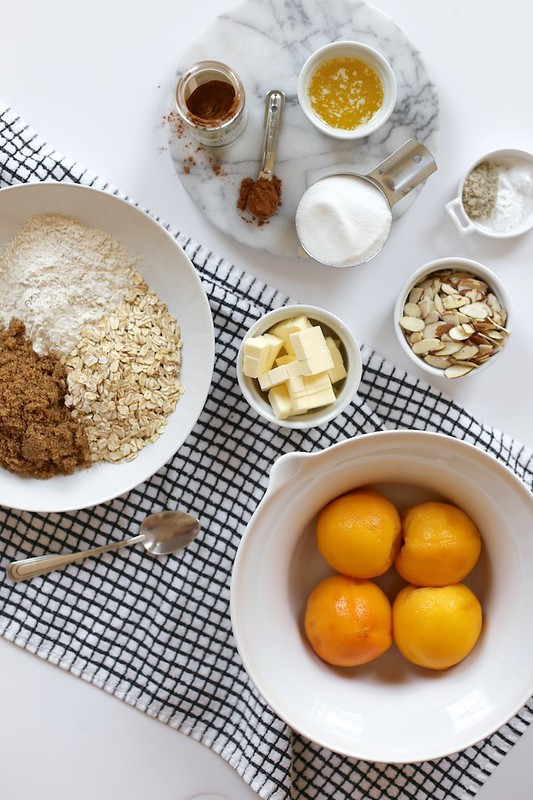 Peaches and crumble, too!

The peaches will be sliced and placed in a pot to cook down.  The crumble is assembled with cold butter and sliced almonds.  Both are going to find their way into the center of our cinnamon rolls.  It’s all quite right. 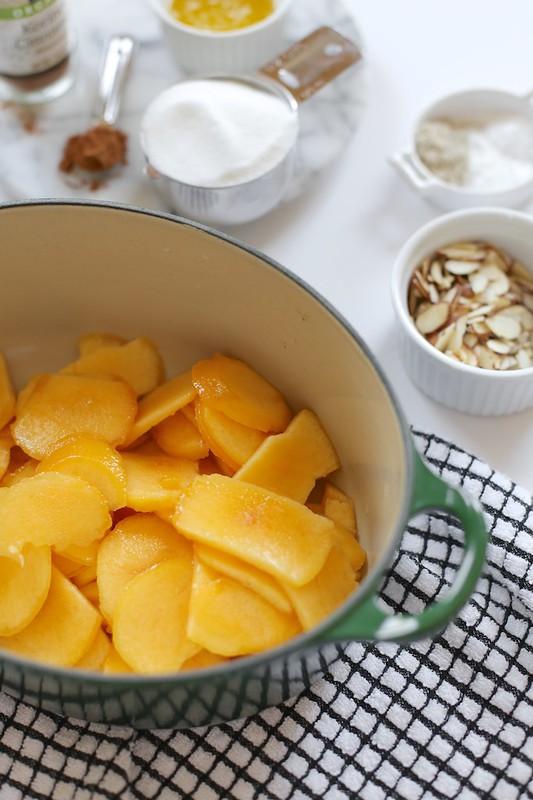 My peaches weren’t very keen on actually separating from the pit.  Stubborn, but still sliced.

Into the pot with a bit of sugar, a load of peach cobbler spices, and a splash of water and cornstarch.  Cooked over  medium heat, mashed with a potato masher until complaint.  Essentially we’re making a warm, fresh peach jam! 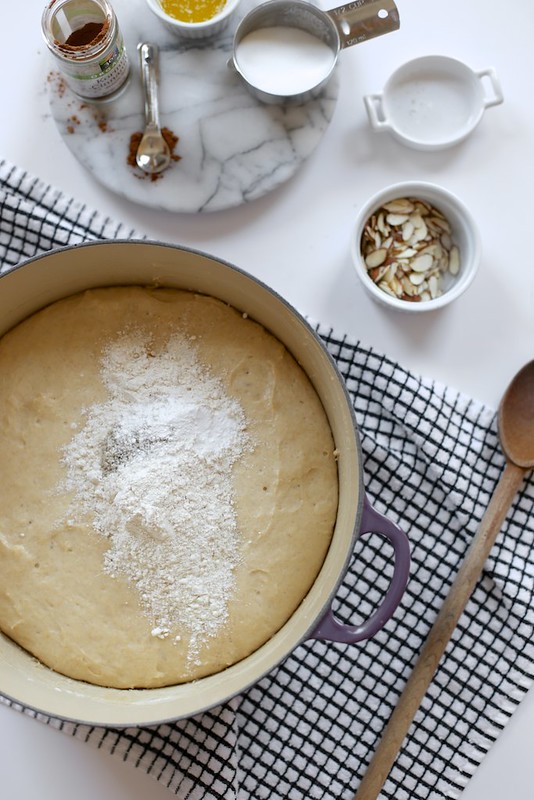 Back to the dough!

It’s risen and ready for a bit more flour, some salt, and some baking soda and baking powder! 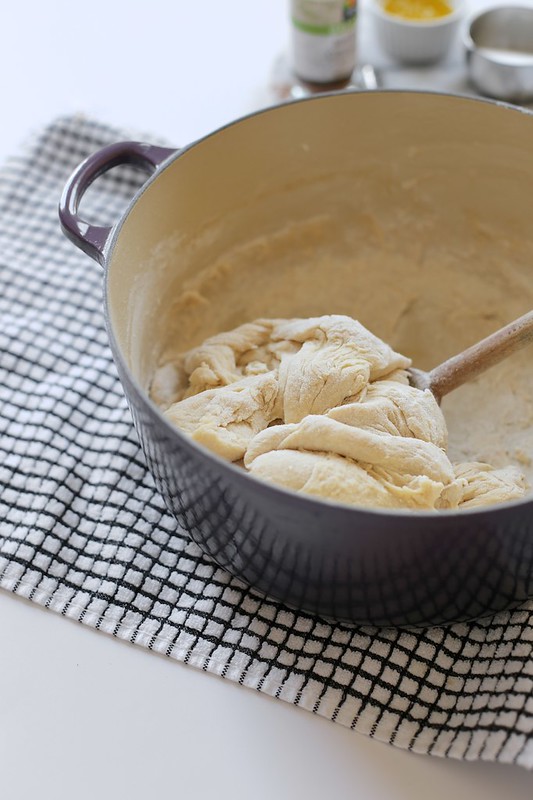 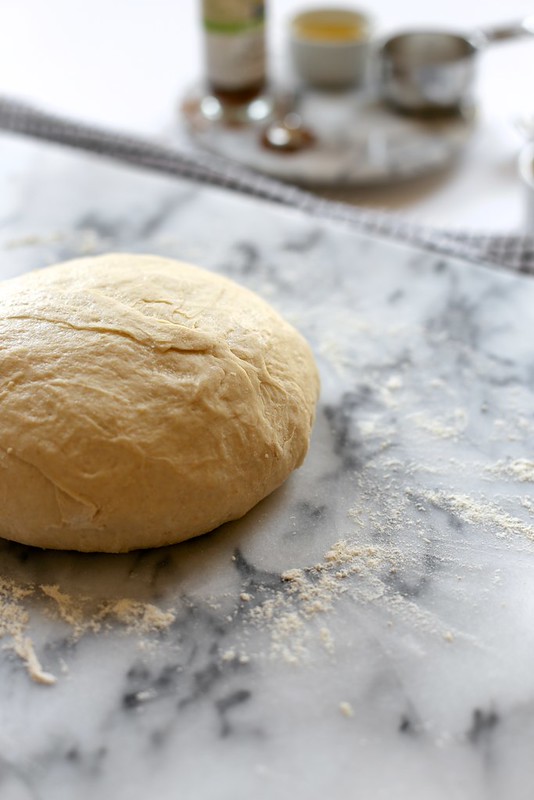 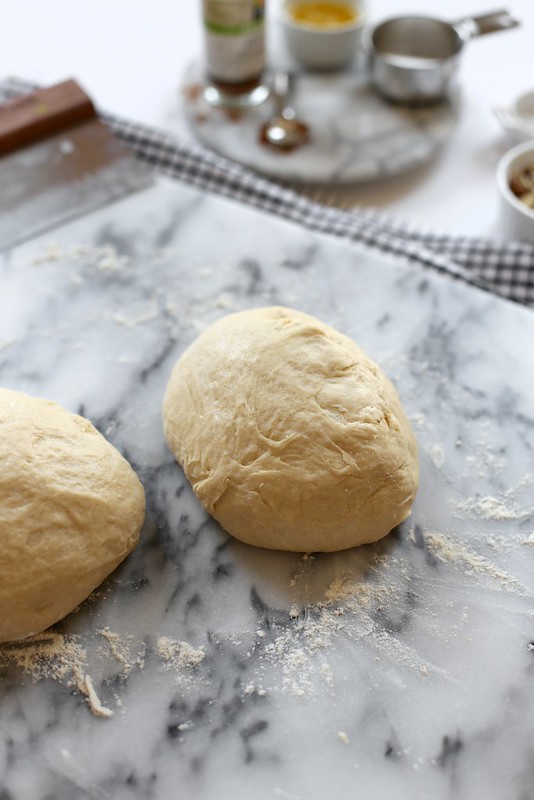 I divided the dough in two to make it easier to work with. 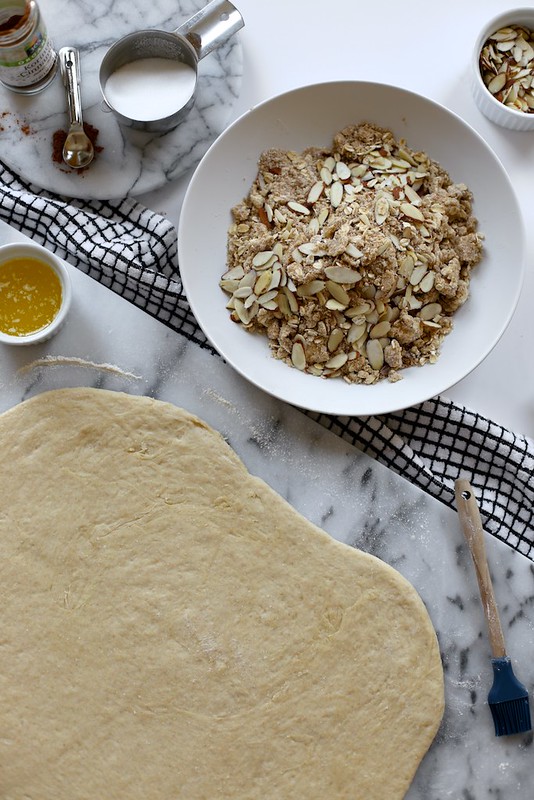 Remember that almond crumble we made?  Yea… this is about to get ridiculous! 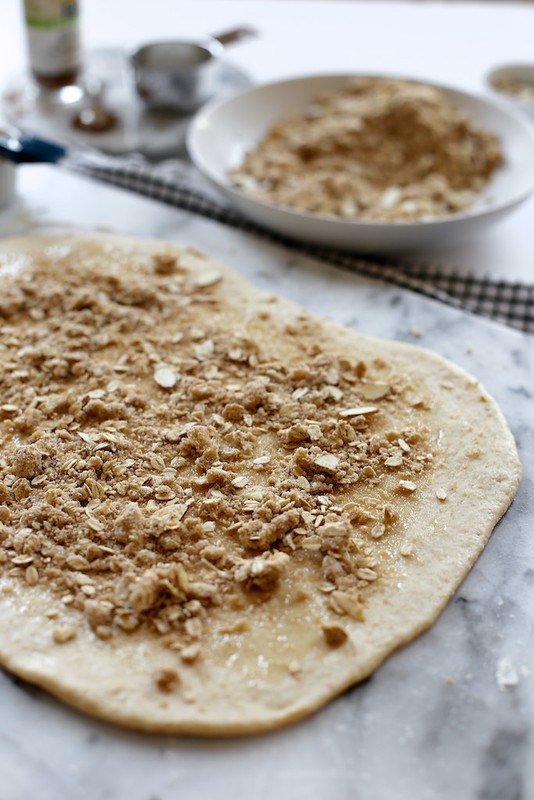 Melted butter is brushed over the rolled dough.  Not a ton, we aren’t savages.  Just enough to moisten the dough.  A thin layer of crumble toppings sprinkled over the buttery dough. 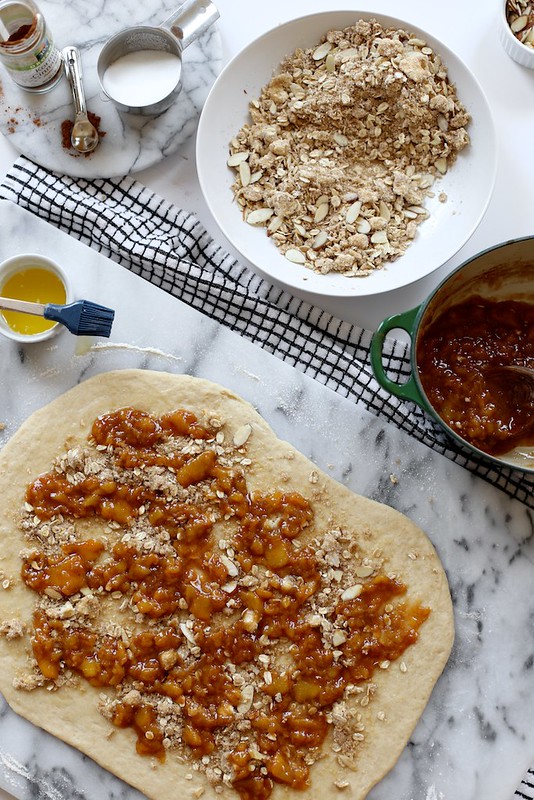 Warm and sweet peach filling!  Let’s go ahead and spread that across.

Don’t worry about filling every nook and cranny.   Once rolled and sliced there will be plenty of peach to go around. 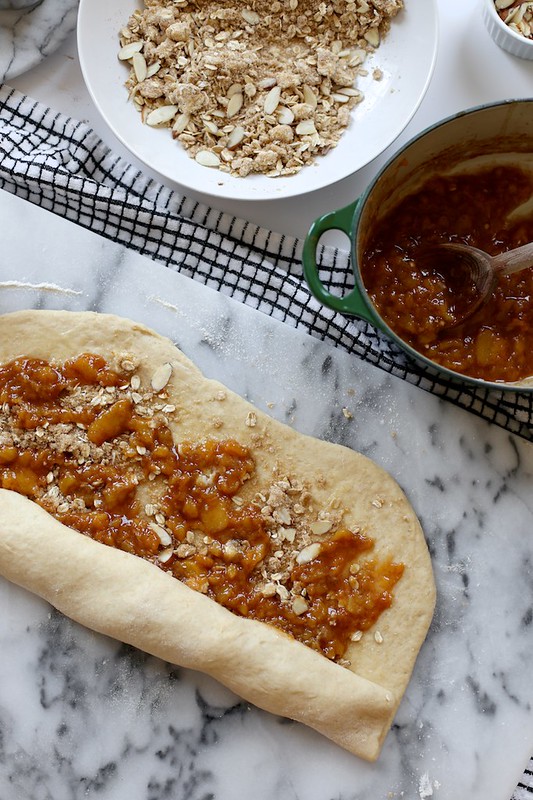 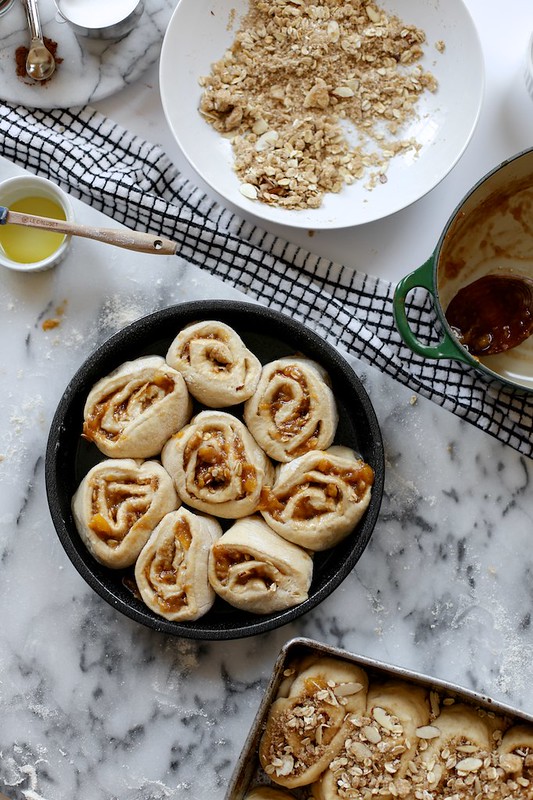 Each dough half is filled, sliced into eight pieces, and placed in a well-greased pan.  More crumble on top!  I mean… it’s the right thing to do. 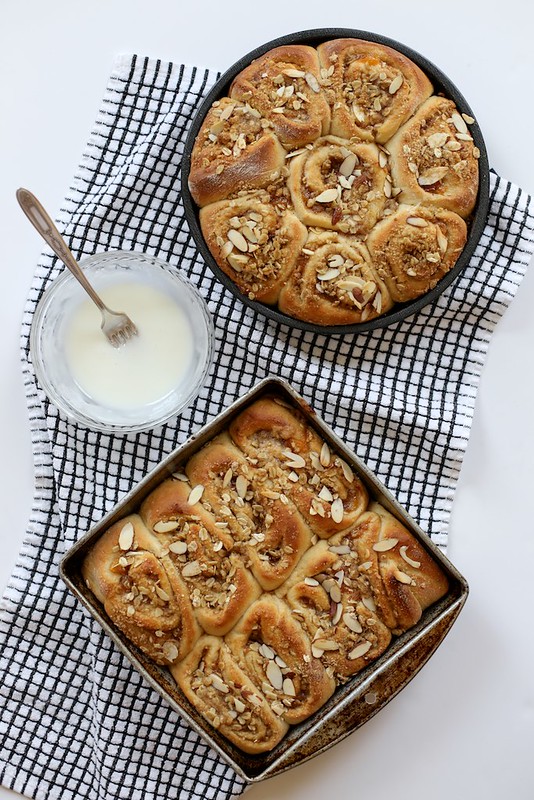 I imagine this is what heaven smells like.  Heaven with peaches and almonds.  Heaven with cinnamon and dough.  Let’s go ahead and start brewing the coffee! 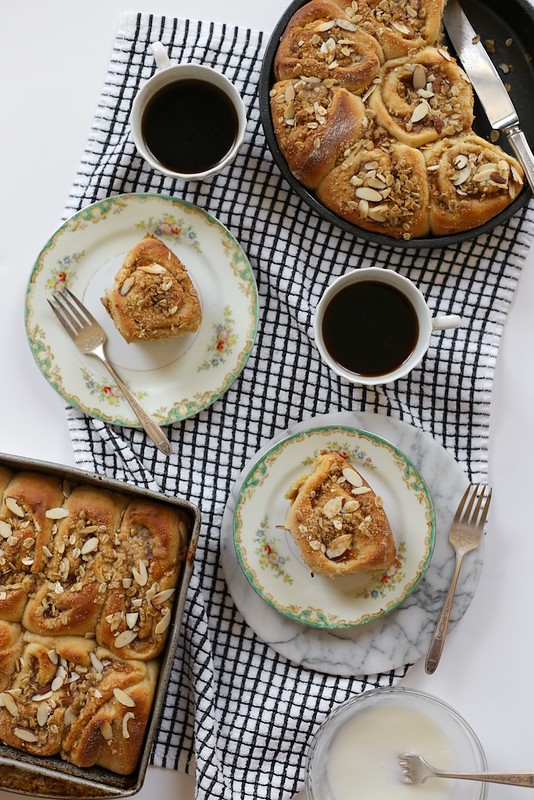 For the Peach Filling: