Hello my friends!  We are well on our way into the cozy season – perhaps my favorite time of year – when my oven is always on and I roast or bake absolutely everything.

Every dinner is a combination of vegetables roasted on a sheet pan combined with eggs of some sort.  Do you eat eggs as enthusiastically for dinner as I do?  They’re a majority of my diet mostly because they’re always in my baker’s fridge and it’s such a comfort.

The most comforting combination of roasting vegetables and egg is, of course, a quiche – the food of truly any time of day!  Today we’re adding layers of thinly sliced potatoes and fresh rosemary and a bright apple and walnut topping.  Trust. It’s good stuff.

Today’s quiche recipe is made in partnership with Diamond of California to celebrate their new nut pie crusts! A few weeks back we made Dark and Stormy Pie with the Diamond of California’s Pecan Nut Pie Crust (major win!), and today we’re exploring a savory version of these versatile crusts! Here’s what you’ll need for this deliciously easy quiche:

• Diamond of Californias Walnut Nut Crust. The crust is ready to go and super easy to use, crisp, and deliciously nutty in flavor.  It’s also great in sweet preparations too. See: Dark and Stormy Pie.

•  Six large eggs and a cup of half and half.

•  Apple, walnut, fresh herbs, and walnuts for a fresh sweet and savory topping to the quiche. Start by peeling and very thinly slicing the potatoes. Slice carefully, we’re going for thinner than 1/4-inch – as thin as we can slice them by hand, really.

Thinly slice shallots as well.  Layer in a medium bowl. The Diamond of California Walnut Nut Crust has a hint of rosemary, so we’re adding an additional layer of herb. Whisk in about 1 cup of half and half until the yolks and egg whites are well incorporated into a cool custard. Season well with sea salt and more crushed red pepper flakes. Time to unveil the crust! The crisp Walnut Pie Crust is ready to fill, so this quiche is a breeze! Before filling the Walnut Nut Crust, toss together the seasoned potatoes, shallots, and rosemary. Begin to layer the potatoes in the pie crust. It doesn’t have to be perfect or packed in. And cover the potatoes with the egg mixture.

As the quiche bakes, the parmesan cheese will brown to golden, the potatoes will roast and soften, the crust edges will crisp and the eggs will bake to firm.

It’s the most delicious way to quiche. Crust walnut crust and a bless-ed amount of potato layers.

The quiche recipe is below though feel free to play with different herbs and cheeses – quiche is a great catch-all for exactly what you have on hand.

Try Diamond Nut of California Nut Crusts during your pie and quiche baking adventures this fall! They’re super flavorful, healthful, and a pleasure to bake with in the kitchen. Find them at Walmart and Kroger stores nationwide.

Potato and Rosemary Quiche with Diamond of California I’d say it’s been a very steady year of recipes this 2021.  We’ve baked birthday cakes. We’ve stuffed cookies with cheesecake (that one was truly ridiculous I’m sorry). We’ve celebrated some of my aunt Dede’s best recipes, and now here we are – celebrating the end of this holiday baking season with a small batch…

END_OF_DOCUMENT_TOKEN_TO_BE_REPLACED 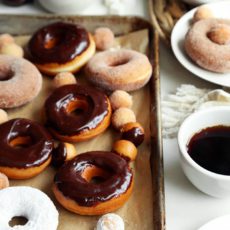 The Most Delicious Homemade Doughnuts

Friends, hello!  I’m here to invite you to your next kitchen superpower:  HOW TO MAKE HOMEMADE DOUGHNUTS.  Once you know how to make yeasted dough and fry it up, well… there’s no going back. You’ve gone and done it. You’re everyone’s favorite person come weekend brunch.  In my early baking days I was obsessed with…

END_OF_DOCUMENT_TOKEN_TO_BE_REPLACED